Bolsonaro's claim seems unlikely to get far, as Lula's victory has been ratified by the Superior Electoral Court (TSE) and acknowledged by Brazil's leading politicians and international allies. Still, it could fuel a small but committed protest movement that has so far refused to accept the result.
Click to expand...

A private audit commissioned by the PL noted that Bolsonaro was the most voted in the newer model ballot boxes, manufactured from 2020, with 51.05% of the vote. Read the EFE report.
---
Specifically, the lawsuit is focused on 61% of the 577,125 ballot boxes used in the second round of the October elections, which the PL said were manufactured between 2009 and 2015 and "cannot be audited", unlike the more modern 2020 model.

Ambassador
FOTCM Member
I am not sure if they're going to be allowed to go through with it, I just caught this tonight as I was doing my news round up.

The head of the organ, Alexandre Moraes, urged the president to resend the complaint, but including the ballots of the first round.
The head of Brazil's Superior Electoral Court (TSE), Alexandre de Moraes, on Tuesday preliminarily dismissed the request made by the president, Jair Bolsonaro, to annul ballots from the runoff, reported Veja.

The Brazilian president and the Liberal Party filed complaints about alleged problems in 279,336 voting machines during the second round, in which Luiz Inácio Lula da Silva won by a slim margin.

Moraes rejected the request of the right-wing space because it only questions the functioning of the electoral system during the runoff, but does not question the counting of the first round, when Bolsonaro got more votes than expected, according to polls.

"Thus, under penalty of dismissal of the complaint, the complainant must modify the complaint so that the request covers both electoral rounds, within 24 [twenty-four] hours," said the authority of the Electoral Justice in a document that he asked to publish "urgently".

According to the documentation provided by the PL, Bolsonaro would have harvested 51.05% of the votes in the runoff, supposedly surpassing the candidate of the Workers' Party (PT, left).

An independent audit, made up of computer specialists, would have found that the old model ballot boxes did not have an individual identification code, which would be an "indication of malfunction", according to the claim made by the PL.

For the PL, not all electronic ballot boxes are auditable and only UE2020 model devices lend themselves to controls. Bolsonaro and the president of the Party, Valdemar Costa Neto, filed a request with the TSE about the nullity of the votes of the ballot box models manufactured in 2009, 2010, 2011, 2013 and 2015, and which were part of the process in the general elections.
Click to expand...

Alejo said:
I am not sure if they're going to be allowed to go through with it, I just caught this tonight as I was doing my news round up.
Click to expand...

They were not allowed and they were fined.

The president of the TSE, Alexandre Moraes, dismissed on Wednesday (23) the request of the PL to cancel the second round of this year's elections. In the decision, the minister ruled that the party of Jair Bolsonaro to pay a fine of R $ 22 million.
Click to expand...

The PL presented on Tuesday (22) a report pointing out alleged inconsistencies in six models of ballot boxes used in the election and argued that part of the votes were annulled. Hours later, Moraes then asked the party to include data on the first round of elections in the report, since the ballot boxes used in the two stages of the election were the same.
Click to expand...

At the end of the article in bold, seemed important, but I do not know much about Brazilian electorate laws and, had not been able to find something related wherever they present the evidence or not, though.

President of the TSE pointed bad faith litigation by the parties and asked the electoral inspectorate to investigate the case. Order cites 'possible commission of common and electoral crimes for the purpose of disrupting the Brazilian democratic regime'.

The president of the Superior Electoral Court (TSE), Minister Alexandre de Moraes, fined the parties of the coalition of President Jair Bolsonaro (PL) R$ 22.9 million for the audit report in which the PL, without indicating evidence of fraud, asks for the annulment of votes of the second round of the October elections.
Click to expand...

Moraes rejected the request for extraordinary verification of the result of the 2022 elections and set the fine of R$ 22,991,544.60 for identifying, in the conduct of the parties, "bad faith litigation" - when someone sues the Justice with ill intent or disloyalty, to cause turmoil.

Besides Bolsonaro's PL, the decision affects the PP and Republican parties - which also formed the defeated coalition in second round.

In the decision, Moraes also determines:
the blocking and suspension of transfers from the Partisan Fund to the acronyms until the fine is paid;
the opening of an administrative process by the General Electoral Inspectorate to investigate "possible misuse of purpose in the use of the party structure, including the Partisan Fund";
sending copies of the investigation to the Supreme Court (STF), as part of the investigation into the actions of an alleged digital militia to attack democracy and institutions.
In the order, Moraes cites the "possible commission of common and electoral crimes in order to disrupt the very Brazilian democratic regime".

The president of the TSE says he considers that the action of the PL does not bring any evidence or circumstance that justifies the reassessment of part of the ballot boxes.
Click to expand...

In a note, the PL reported that it activated its legal advice and that it " only followed what is established in article 51 of the Electoral Law, which requires the subtitles to carry out an inspection of the electoral process. "
Click to expand...

FOTCM Member
This series of tweets responding to Elon Musk is interesting, I had not seen it before.... censorship by any government directly.

mabar said:
They were not allowed and they were fined.
Click to expand...

I figured they would do that.

As far as everyone is concerned, the elections in Brazil is a done deal and Lula is the new face of that nation. I would be excited to have him back, because of what it means to the region, but this time I am actually not that excited because of the push to the left that is taking place globally, or at least in the west.

Alejo said:
I figured they would do that.

As far as everyone is concerned, the elections in Brazil is a done deal and Lula is the new face of that nation. I would be excited to have him back, because of what it means to the region, but this time I am actually not that excited because of the push to the left that is taking place globally, or at least in the west.
Click to expand...

Had not been able to corroborate it else where, though.

mabar said:
Had not been able to corroborate it else where, though.
Click to expand...

It would be interesting, but who knows how far that will go.

Something of interest to note here, he was being rather passive about the election results, but once Donald Trump made his announcement, I got the sense that he kind of gathered a bit of bravery from it.

FOTCM Member
Keep seeing signs in this can of worms.

FOTCM Member
Jair Bolsonaro has confirmed that he is the Supreme Chief of the Armed Forces, and they will back the Brazilian citizens…

Reprehensible and antidemocratic the coup attempt of the conservatives of Brazil, encouraged by the oligarchic power elite, their spokesmen and fanatics. Lula is not alone, he has the support of the progressive forces of his country, of Mexico, of the American continent and of the world.

FOTCM Member
What the heck is going on? Stalinists??

👀- idol of the left, the genocidal Stalin.

Bolsonaro repudiated "unproven" accusations attributed to him by Lula after violent riots by his supporters in Brazil.

https://twitter.com/i/web/status/1612254480367771686
Bolsonaro rejects violent demonstrations: "Peaceful demonstrations are part of democracy. However, depredations and invasions of public buildings such as those that occurred today, as well as those practiced by the left in 2013 and 2017, escape the norm."

If this does not cool down immediately and the police and army divide and begin taking sides... ...we do not want to see this happening in the largest country of the continent.

Be careful with how the MSM English speaking international left media frames this. Always a lot lot more to the reality down here than the tired right bad, left good narrative.

There is a populist nationalism (knee-jerk labeled as rightist) that is growing in Chile, Argentina, Peru, Brazil and even in Colombia where people are having second thoughts about Petro. Look at the approval and disapproval numbers over time of the leaders of this left "block" - Peru's Castillo before he tried an autocoup and was ousted and also the numbers of his former vice-president who is now in charge, Argentina's Fernandez, Chile's Boric (70% disapproval with not even a year in office), Petro and back to Brazil with Lula's probable election rigging.

All eyes in the region on Brasil. The ramifications if this three ton bear of a country implodes is concerning to put it mildly.

Bolsonaro is believed to have been staying in the greater Orlando, Florida, area since the last week of 2022. Reporters and others in the area have published photos allegedly showing the former conservative president eating at a local KFC and meandering in a Publix supermarket.

"Bolsonaro has endured years of painful health complications since a failed assassination attempt in 2018. During a campaign rally that year prior to the presidential election, a socialist later identified as Adelio Bispo de Oliveira stabbed Bolsonaro in the stomach on camera. The stabbing caused substantial damage to Bolsonaro’s digestive system, requiring semi-regular hospitalization."

"The hospitalization may explain Bolsonaro’s relative silence on Sunday’s riot."

"In the United States, members of Congress Joaquín Castro (D-TX) and Alexandria Ocasio-Cortez (D-NY) pressured leftist President Joe Biden to remove Bolsonaro from American soil in response to the riots. Lula allies in Brazil have similarly demanded his extradition."

“The political calculus of loyal allies, the more vulnerable Bolsonaro is and the less popular support he can attract, the greater the chances that he becomes ‘easy prey’ for the judiciary and ends up in jail,”

"Bolsonaro faces dozens of lawsuits by leftists for other unrelated matters, most prominently his opposition to Chinese coronavirus-inspired civil rights restrictions." 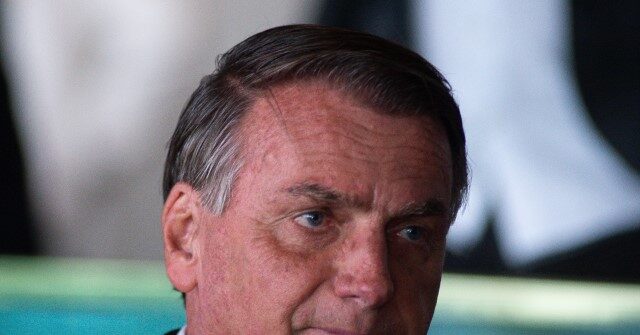 The Brazilian newspaper O Globo reported on Monday, without citing any sources, that former President Jair Bolsonaro was hospitalized.

Find the differences between the takeover of the Capitol in 2021 and yesterday's protests in Brazil...