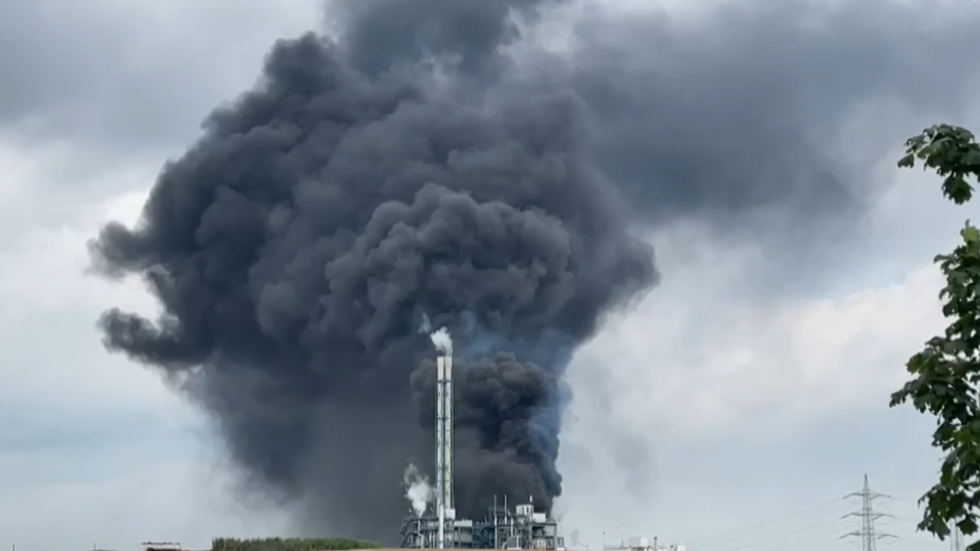 A severe explosion has occurred at a major chemical industrial park in Leverkusen, Germany, sending toxic smoke billowing above the city with residents told to stay indoors and close all windows and doors.

A severe explosion has occurred at a major chemical industrial park in Leverkusen, Germany, sending toxic smoke billowing above the city with residents told to stay indoors and close all windows and doors.
On Tuesday morning, Leverkusen’s Chempark, an industrial complex for the chemical industry, tweeted that the cause of a huge explosion was uncertain but called on all residents of the city to stay indoors, keeping all windows and doors firmly shut.
It confirmed that the incident occurred at its disposal center, after earlier reports suggested the location was a waste incineration plant.
ALSO ON RT.COM1 dead and at least 16 injured after HUGE explosion rocks German chemical park
According to Chempark, more than 70 companies operate from its various sites across Germany. The facilities in Leverkusen, Dormagen and Krefeld-Uerdingen account for around one-third of the total chemical production in North Rhine-Westphalia.

The Cologne Fire Brigade said it was assisting the Leverkusen Fire Brigade with its operations, adding that the smoke plume could be seen from miles away.

Footage shared online shows the smoke swelling out of the facility, which is apparently owned by the Bayer Chemicals giant, on the banks of the Rhine.

According to the city’s police department, the roads around the facility have been largely blocked off. Motorways are also affected.

The police made a further request for people to stay away from the area and keep off the roads, noting that they need as many emergency service personnel on-site as possible.
“Five employees are currently missing,” the park's operator, Currenta, said in a statement. An air test van was in use, it added, and reiterated that the cause of the explosion remains unknown.
According to local authorities, 16 people have been injured, four of them severely.
Residents also received a warning on the NINA app, which sends important civil protection warnings for various hazard situations. It read: “Explosion in Bürrig, warning level: extreme danger.”
In 2016, there was a major fire at the Leverkusen chemical park that put the whole area on alert. The blaze broke out at a chemical storage facility during restocking procedures and was safely extinguished by the fire brigade. Chempark said the fire didn’t cause any danger to the public and no one was injured.

FOTCM Member
https://twitter.com/i/web/status/1421103029043048457
There was a video of an explosion at a chemical plant in the Rostov region. The emergency happened the night before, seven people were injured, they were hospitalized https://ria.ru/20210730/pozha

MOSCOW, July 30 - RIA Novosti. Eyewitnesses published a video on the Web showing the consequences of an explosion at the Kombinat Kamensky chemical plant in the city of Kamensk-Shakhtinsky, Rostov Region .

The footage shows columns of smoke rising into the sky.

As a result of the emergency, which happened the night before, seven people were injured, they were hospitalized with burns.

The fire did not lead to harmful emissions into the atmosphere, it was quickly eliminated. The Ministry of Industry and Trade began checking.

FOTCM Member
https://twitter.com/i/web/status/1425549517600997383
Line-1
Oops! If the in #SantaCatarina . Be careful those who walk near Protexa in Av. Cuauhtémoc! .. MX.
Line-2
Imagine! They are pure very strong chemicals that with the pure smell can intoxicate the surrounding people.


https://twitter.com/i/web/status/1425560110064099337
Here the Right moment of THE EXPLOSION AND FIRE IN #Protexa , continues to fight the fire of a rescuer in the metropolitan area in the factory located on Avenida Diaz Ordaz Col. Treviño #SantaCatarina @Cicmty @Formula_Mty

Flaring at the Chevron Refinery in Richmond Tuesday afternoon sent a large plume of black smoke into the sky that could be seen across the Bay Area. (8/10/21)
Click to expand... 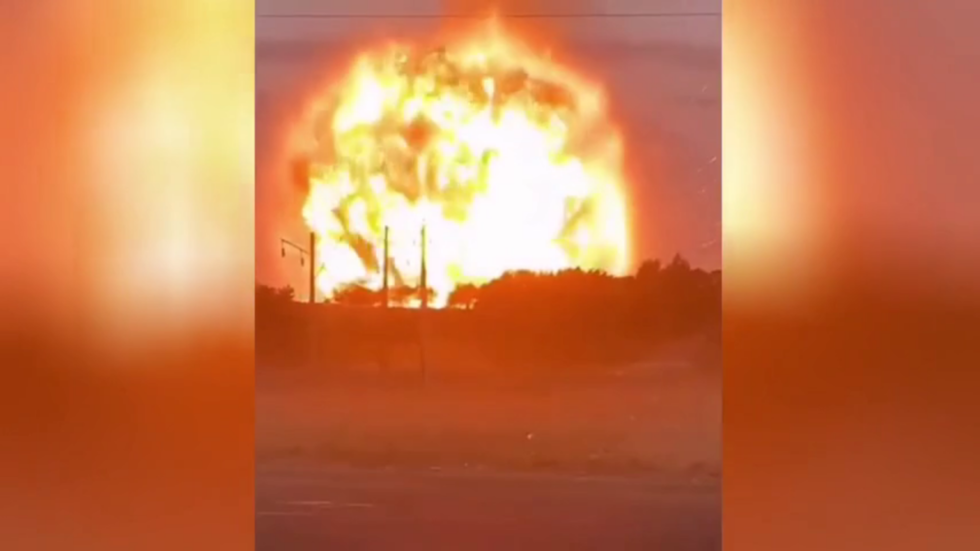 A colossal blast has shaken an armed forces facility near the city of Taraz in southern Kazakhstan, with defense officials confirming to local media that a fire is still raging near the base after the huge explosion.

Administrator
Moderator
FOTCM Member
In Pamiers, Southwest France, a fire started allegedly from an acid bath for the treatment of aeronautical parts, the factory is currently burning:

Emergency personnel are responding to an explosion and fire at the Mina Al Ahmadi Refinery in Kuwait City the morning of Oct. 18. The cause of the explosion remains unclear. There have been no immediate reports of casualties.

Increased security measures are likely near the affected area as authorities investigate the incident. Localized transport and business disruptions are possible near the incident site through the afternoon of Oct. 18. Authorities could evacuate buildings in the area as a precaution.
Click to expand...

FOTCM Member
https://twitter.com/i/web/status/1451445167916003341
An explosion and fire at the gunpowder production department of a factory near the Russian city of Ryazan has killed at least five people and injured others, it has been reported. The fate of other workers still remains unknown.

“17 people were injured, seven of them died, one was hospitalized, the fate of nine people remains unknown,” the press service of the Ministry of Emergency Situations confirmed to RIA Novosti.

The fire broke out early Friday morning due to what was described by the ministry as “the result of a technological process.” According to Vladimir Lukantsov, the head of Shilovsky District, the region where the factory is located, a total of 17 people were in the facility at the time of the explosion.

The factory, PGUP Elastik, is located around 2km from the nearest settlement, and the surrounding population is not thought to be in danger 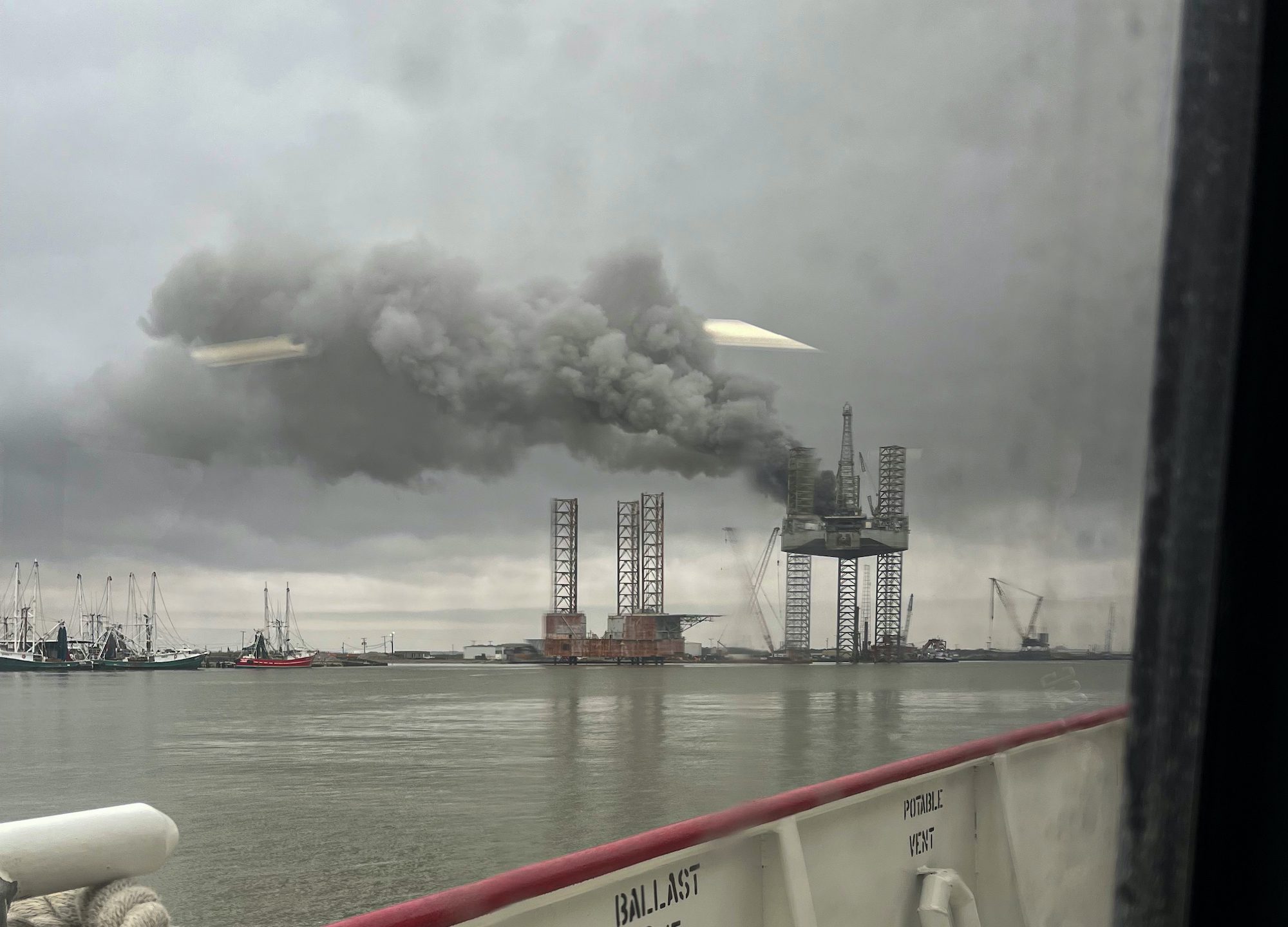 The U.S. Coast Guard rescued nine people Thursday from a burning jack-up drilling rig near Sabine Pass, Texas. Sector Houston-Galveston watchstanders received a notification at 12:51 p.m. from a dredger in...

Sector Houston-Galveston watchstanders received a notification at 12:51 p.m. from a dredger in the area that the Pride Wisconsin rig was on fire in Sabine Pass with nine people aboard.

The Dolphin crew arrived on-scene, lowered a rescue swimmer and began hoisting the crewmembers from the deck of the rig. Video of the rescue was streamed live by a local newstation:


Out of view from the camera, the crewmembers were taken by the helicopter to a nearby rig where they were able to meet with emergency medical services personnel.

No injuries were reported and there are no signs of pollution at this time.

The rig appears to be located at the Port City Partners yard on the Sabine-Neches Ship Channel and was obviously jacked up at the time.

The Port Arthur Fire Department will maintain the scene until the fire has burned itself out. 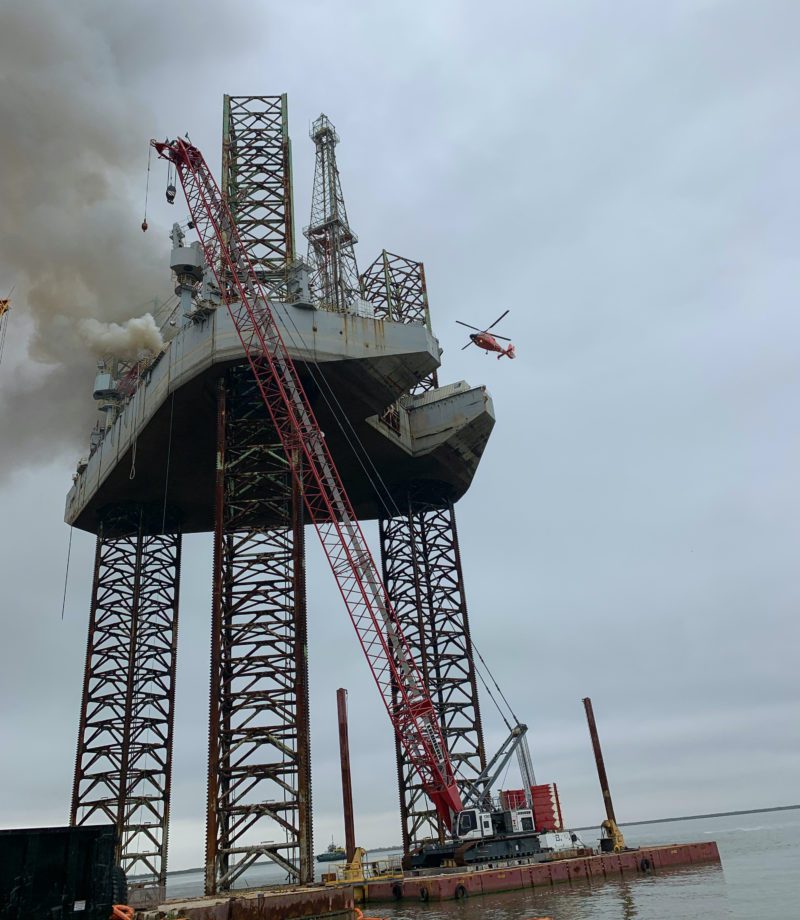 “Thanks to the phenomenal teamwork and coordination by everyone involved, nine lives were saved,” said Capt. Keith M. Donohue, search and rescue mission coordinator for the case. “Coast Guard crews and personnel train year-round for life-saving situations like this and we take great pleasure in knowing everyone was able to go home safely.”

The cause of the incident is under investigation. 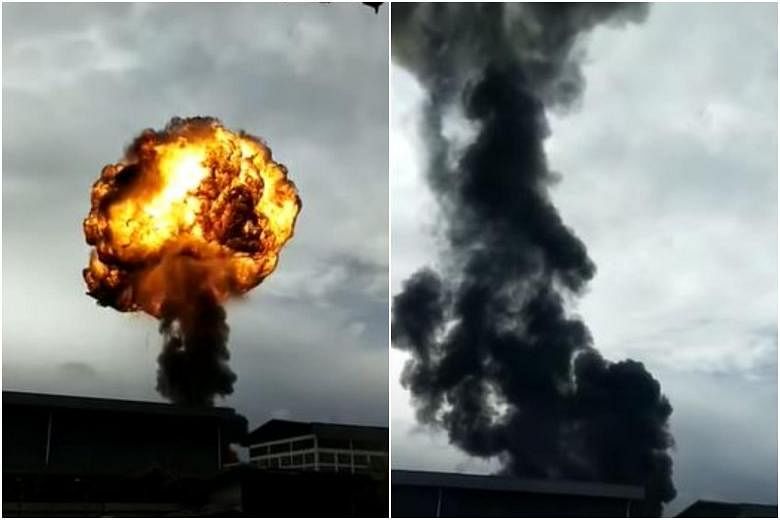 A fire broke out at a petrochemical plant near the industrial town of Pasir Gudang. Read more at straitstimes.com.

https://twitter.com/i/web/status/1529794327114833920
Two dead in an explosion at a biodiesel plant in Calahorra, La Rioja A group of 250 children who were hiking in the vicinity have been evacuated from the area (There will be expansion)
@RTVCes 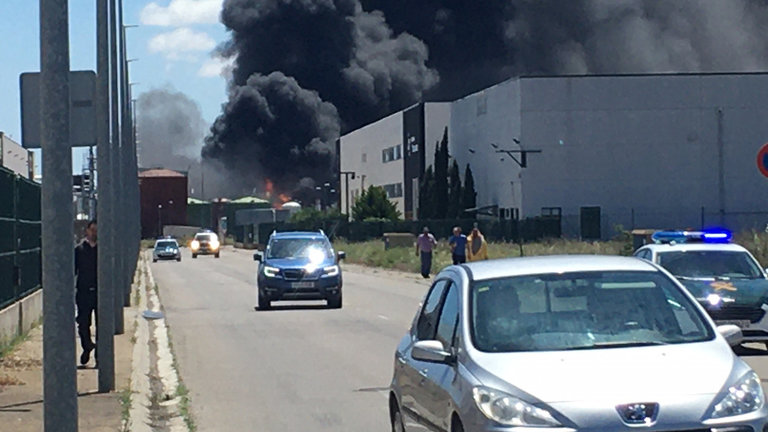 Two people have died this Thursday after an explosion at the Calahorra biodiesel plant, in the El Recuenco industrial estate in this Riojan city.

The Government Delegation in La Rioja details that at 12:55 p.m. it received a notice from SOS Rioja 112 about some explosions near the “Tierra Rapaz” leisure park .

The emergency services that went to the scene of the event confirmed the death of two people and proceeded to evacuate the biodiesel plant.

In addition, all available patrols have been mobilized to the site, since there were 250 children on excursions in the vicinity. The emergency services proceeded to evacuate them and they are fine.

The Government of La Rioja has indicated that the causes of the explosion in this biodiesel production plant, located about 50 kilometers from Logroño, are not known.

Resources from the Rioja Health Service, Firefighters, Local Police and Civil Guard have been dispatched to the scene of the event.
Click to expand... 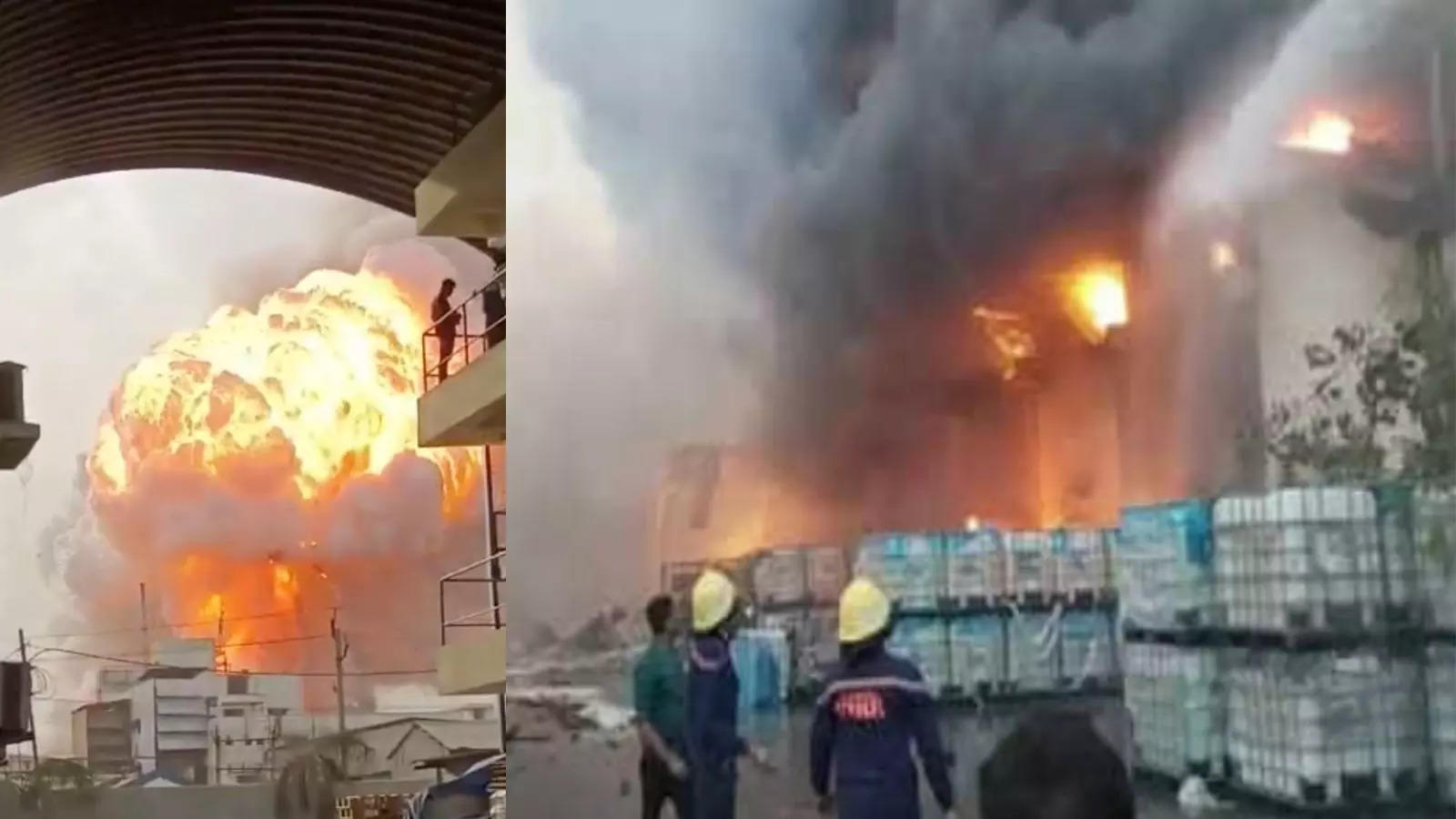 A major fire has broke out at Deepak Nitrite’s plant in Nandesari-GIDC area of Vadodara. Huge flames along with billowing smoke could be seen from outside the area. Several blasts were also heard. Some nearby residential areas have also been enveloped by the smoke from the fire. Fire brigade...

Jun 03, 2022, 11:04AM ISTSource: TOI.in
A major fire has broke out at Deepak Nitrite’s plant in Nandesari-GIDC area of Vadodara. Huge flames along with billowing smoke could be seen from outside the area. Several blasts were also heard. Some nearby residential areas have also been enveloped by the smoke from the fire. Fire brigade officials say they are trying to control the spread of the flames. The deafening blasts at the site could be heard several kilometres away.
Click to expand...

A fire has broken out at a petrochemical plant in Shanghai after several explosions were reportedly heard. Emergency services are on the site and evacuations having taken place

Fire crews are tackling a massive fire at a petrochemical plant in Shanghai with the sky lit up by flames following reports of an explosion.

Evacuations have taken place at the facility in the the Jinshan District after a fire broke out in the early hours of Saturday morning, the fire department reportedly said.
Click to expand... A fire has broken out at a petrochemical plant in Shanghai after several explosions were reportedly heard. Emergency services are on the site and evacuations having taken place