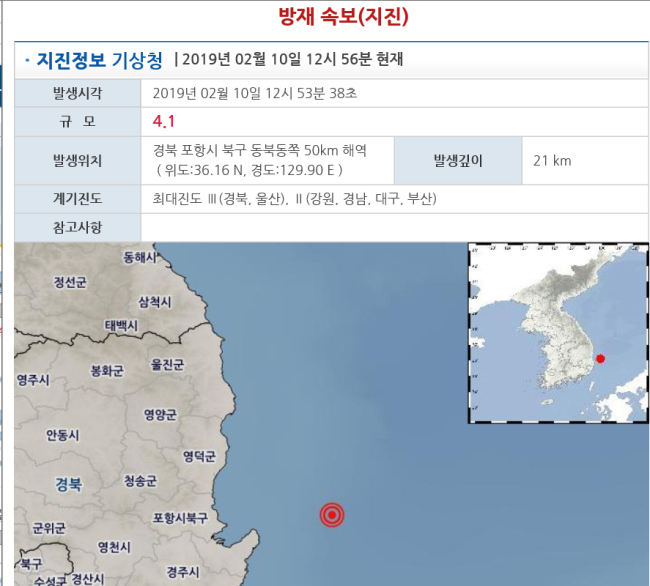 [Newsmaker] No damage reported from 4.1 magnitude earthquake off Pohang

A 4.1 magnitude earthquake struck off the southeastern city of Pohang on Sunday, but there have been no reports of damage, meteorological officials said.The quake happened at 12:53 p.m. in waters 50 kilometers northeast of the port city at a depth of 21 km, officials at the Korea Meteorological...
www.koreaherald.com

The country is located in the so-called Ring of Fire where a large number of earthquakes and volcanic eruptions occur.

The 6.4-magnitude quake was reported at around 14:35 GMT with the epicentre located 47 km from the city of Namatanai, New Ireland. There is no official information about any victims or damage caused by the earthquake at the moment.

The report comes just a few months after another powerful quake struck 148 km (92 miles) south of the island of Rabaul.


https://www3.nhk.or.jp/nhkworld/en/news/20190222_06/ said:
A magnitude 5.8 earthquake has rattled Japan's northern island of Hokkaido. There's no word of any casualties.
The quake occurred at 9:22 PM local time Thursday night at the depth of 30 kilometers in the central part of the island. In the town of Atsuma, the tremor registered 6 minus on the country's seismic scale up to 7.
A local government official in the town says the earthquake was very strong. The individual said the shaking continued for about 10 seconds and the lights went out temporarily.
Click to expand...

https://www3.nhk.or.jp/nhkworld/en/news/20190222_07/ said:
Quake leaves people in cold, stranded on trains
Authorities in Hokkaido have opened shelters for people left stranded on trains or out in the bitter cold following the strong earthquake on Thursday.

The operator of Sapporo's subway system decided to suspend operations for the day, leaving people seeking other ways to get home.

Dozens of them formed a long line at a taxi stop in an entertainment district while others headed home on foot.

Sapporo city authorities say they are preparing an underground passageway linking the subway's Sapporo Station and Odori Station as a shelter for those who cannot make it home.

They also opened a shelter in a multi-purpose complex, Sapporo Sosei Square, in Chuo Ward.
Click to expand... 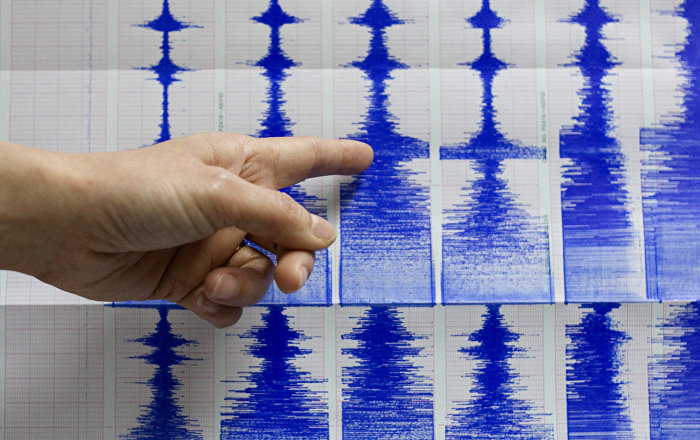 The United States Geological Survey has reported a 7.7-magnitude earthquake that struck 224 kilometres east-southeast of Ambato, Ecuador, on 22 February.

Magnitude 7.7 Quake Hits Southeast of Ecuador - USGS
© AP Photo /
LATIN AMERICA
13:31 22.02.2019(updated 13:56 22.02.2019)Get short URL
0 32
The United States Geological Survey has reported a 7.7-magnitude earthquake that struck 224 kilometres east-southeast of Ambato, Ecuador, on 22 February.
The Peru-Ecuador border region has suffered a major 7.5-magnitude earthquake, according to the European-Mediterranean Seismological Centre and 7.7 magnitude according to the United States Geological Survey.
Witnesses have reported of feeling the tremors in various cities in the border area with neighbouring Ecuador, according to Bluradio. 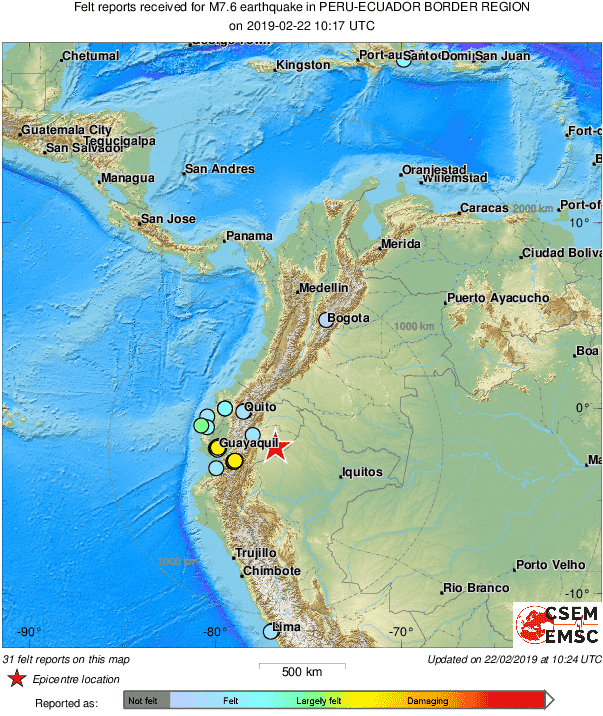 The earthquake's epicentre was located at a depth of 132 kilometres. The shocks were registered 132 kilometres southeast of Palora, Ecuador. 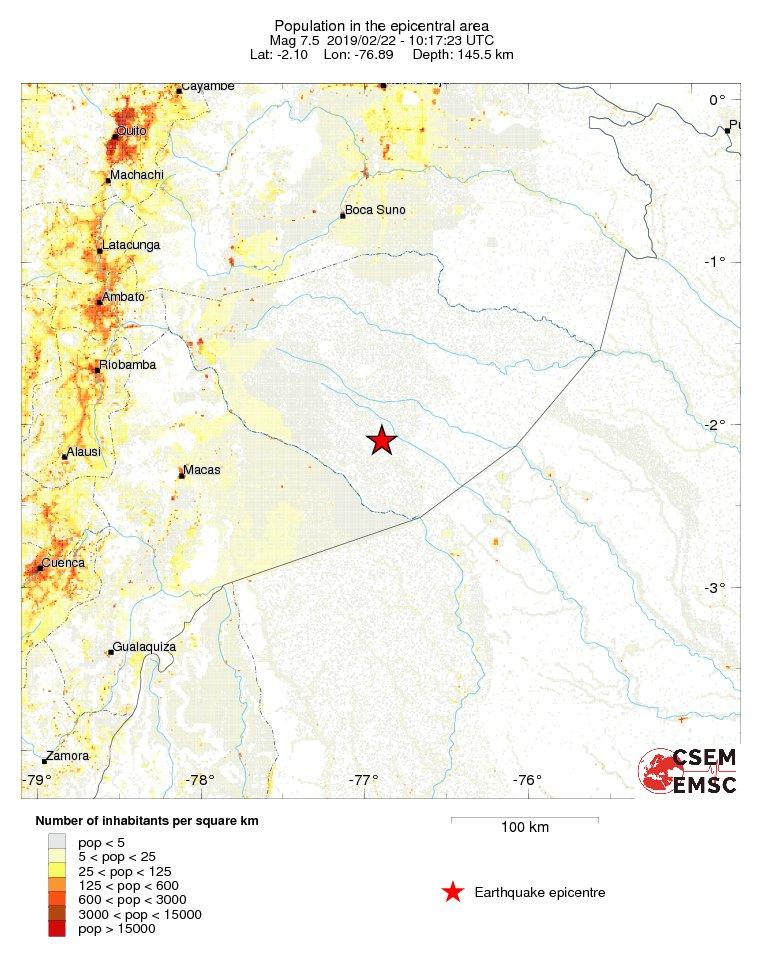 There were no reports of damage or casualties.

Information about possible casualties or destruction is not available at the moment.

A magnitude 7.1 earthquake has hit Peru, northwest of Juliaca, US Geological Survey reported on Friday. The quake's epicenter lay at a depth of 258 kilometers.


https://twitter.com/i/web/status/1101406987240189952
The latest major earthquake occurred in the region last week when a 7.7-magnitude earthquake hit the Peru-Ecuador border.

YUZHNO-SAKHALINSK (Sputnik) - A 5.9 magnitude earthquake has been registered off the coast of Russia's Kuril Islands, the Sakhalin branch of the Geophysical Service of the Russian Academy of Sciences (GS RAS) told Sputnik.

"A magnitude 5.9 earthquake was registered at 14:22 Saturday [03:22 GMT] near the Kuril Islands", head of the Yuzhno-Sakhalinsk seismic station Elena Semenova said.

The epicentre of the aftershocks was located at 41.9 degrees north latitude and 147.0 degrees east longitude, some 160 miles southeast of Yuzhno-Kurilsk, a regional centre on Kunashir Island, at a depth of 23 miles, she added.

According to Sakhalin Region's emergency services, there were no casualties, injuries, or damage caused by the earthquake. No tsunami alert was made.

The Kuril Islands are located in a seismically active region known as the Ring of Fire, which is constantly affected by powerful earthquakes.
Click to expand...

FOTCM Member
While writing another post, I felt that the building moved ... sometimes it shakes if trucks pass, but this one I felt different, I was curious and went to check

FOTCM Member
In 12 hours, 53 earthquakes were recorded; there was an epicenter in Puebla. --from spanish using deepl
During 12 hours, at least 53 low-intensity earthquakes occurred in several states of the country, mainly in the south, but also in the north and center of the country, according to the National Seismological Service.

According to its morning report, most of the telluric movements were in Oaxaca, Chiapas and Guerrero, but they were also registered in Michoacán, Veracruz, Baja California and Puebla.

The magnitude of the earthquakes in the last 12 hours was between 3.2 and 4.0, while one recorded at 8:12 this Saturday reached 4.1, with epicenter in Tapachula, Chiapas.

These had been in the last hour.

FOTCM Member
There is a new Chinese study ScienceDirect that was mentioned on a youtube by Suspicious0bservers in the edition with the title: "Magnetic Weakening, Cosmic Rays, Deadly Storm | S0 News Mar.3.2019"
The title and the abstract of the study is:

A study of the ionospheric disturbances associated with strong earthquakes using the empirical orthogonal function analysis
Abstract
Click to expand...

In this study, an ionospheric logTEC model has been constructed using an empirical orthogonal function (EOF) decomposition method. The main orders (1–9 orders) of this EOF model represent the ionospheric background, while the rest high orders represent ionospheric TEC perturbations. Based on this model, logTEC data during 16 Ms ≥ 8.0 earthquakes from 2000 to 2012 have been analyzed. We found that ionospheric disturbances occurred in 10 earthquakes. Ionospheric abnormities were clearly observed 5 days before the earthquakes, but ionospheric disturbances can also be seen 1 day before, and 1 day and 2 days after the earthquakes. For the TEC data, the possibility of positive (enhanced TEC) and negative (decreased TEC) abnormities is almost the same. Furthermore, by using the simulation results of ionospheric electric field and SAMI2 model, we show that an abnormal westward electric field can lead to electron density enhancements equatorward and decrease polarward of the epicenters, and vice versa for an eastward abnormal electric field.
Click to expand...