Moderator
FOTCM Member
There was an earthquake near Andorra a few days ago. It was described as the strongest earthquake of this century for the region with 4.5 in the scale of Richter. Not a big one, but the region has been relatively calm during the past century or so. 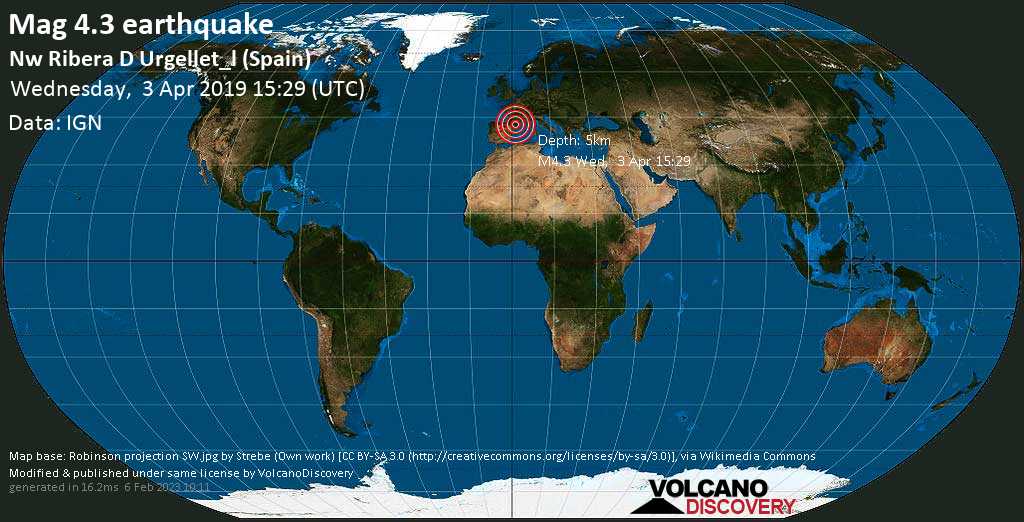 MOSCOW, April 10. /TASS/. /TASS/. An earthquake of 5.0 magnitude has been registered in Taiwan, US Geological Survey reported on Tuesday.

The earthquake's epicenter lay in 3 km to the south-west from the city of Hualien at the depth of 10 km.

No injuries or damages have been reported.
Click to expand...

The epicentre of the tremor was located about 15 miles (24 kilometres) southwest of the city of Kailua-Kona at a depth of 10 miles (16 kilometres).

According to the US Geological Survey (USGS), a 5.3-magnitude quake has occurred near the Big Island of Hawaii. However, the Pacific Tsunami Warning Centre of the National Weather Service has noted there is no tsunami danger.

At the moment, no victims or major damage have been reported, the quake, however, was felt by many people in the area.

According to a local central weather bureau, Taipei area has been rocked by some 4-magnitude quake. There have been no immediate reports of casualties or damage to the buildings so far.

According to the US Geological Survey, a strong 6.4-magnitude earthquake has rocked eastern Taiwan. A 6.1-magnitude quake was registered in the Hualien County on the eastern coast of Taiwan, the China Earthquake Networks Center (CENC) said on Thursday.

All subway services have been temporarily suspended in Taipei due to the earthquake, local media reported. The quake measures 4 magnitude in the Taipei.

The seismological activity took place at about 1 p.m. local time (05:00 GMT) at the depth of about 50 kilometers (31 miles).
There have been no immediate reports of damage or injuries as a result of the quake.

Signs of the Times: The World for People who Think. Featuring independent, unbiased, alternative news and commentary on world events.

Signs of the Times: The World for People who Think. Featuring independent, unbiased, alternative news and commentary on world events. 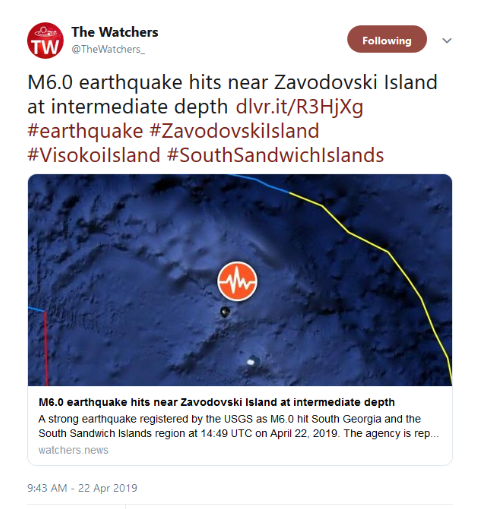 FOTCM Member
https://twitter.com/i/web/status/1120424778920280065
Translated from Spanish by Microsoft
Map of intensities of the M 5.7 preliminary earthquake (SSN). At least 5 earthquakes have been registered in the area of Cuajinicuilapa (Gro)-Pinotepa (Oax).

MOSCOW, April 22. /TASS/. /TASS/. An earthquake of 5.4 magnitude has been registered off Japan's coast, US Geological Survey reported on Monday.

The earthquake's epicenter lay in about 190 kilometers to the north-east of the city of Miyako in the Iwate Prefecture at the depth of 10 kilometers.

No injuries or damages were reported, and no tsunami alert was issued.
Click to expand...

MOSCOW, April 22. /TASS/. /TASS/. An earthquake of 5.4 magnitude has been registered in the south of Mexico, US Geological Survey reported on Monday.

The earthquake's epicenter lay in 283 km to the south of the city of Puebla de Zaragoza at the depth of 21 km.

Reuters reported that shaking was felt in several parts of Mexico City.

According to Reuters, head of Mexico's civil protection agency David Leon said that there were no initial reports of damage or injuries.
Click to expand...

OTTAWA, April 23. /TASS/. An earthquake of 5.3 magnitude has been registered off Canada's west coast, Earthquakes Canada reported on Tuesday.

No injuries or damages were reported, and no tsunami threat was issued.
Click to expand...

According to the United States Geological Survey, a magnitude 6.6 earthquake hit the South Philippines. The quake took place at 05:37 GMT some 140 miles southwest of Cebu City. The epicenter of the earthquake was located at the depth of 53 miles.

There were no immediate reports of casualties or damage.


https://twitter.com/i/web/status/1120565497593061377
The Philippines is situated in the so-called "Ring of Fire", a seismically-active zone of volcanoes and fault lines circling the edges of the Pacific Ocean.
Click to expand...

Their efforts, published online by the journal Science on April 18, expand the earthquake catalog for that region and period of time by a factor of 10—growing it from about 180,000 recorded earthquakes to more than 1.81 million. The new data reveal that there are about 495 earthquakes daily across Southern California occurring at an average of roughly three minutes apart. Previous earthquake cataloging had suggested that approximately 30 minutes would elapse between seismic events.

This 10-fold increase in the number of recorded earthquakes represents the cataloging of tiny temblors, between negative magnitude 2.0 (-2.0) and 1.7, made possible by the broad application of a labor-intensive identification technique that is typically only employed on small scales. These quakes are so small that they can be difficult to spot amid the background noise that appears in seismic data, such as shaking from automobile traffic or building construction.

"It's not that we didn't know these small earthquakes were occurring. The problem is that they can be very difficult to spot amid all of the noise," says Zachary Ross, lead author of the study and postdoctoral scholar in geophysics, who will join the Caltech faculty in June as an assistant professor of geophysics. Ross collaborated with Egill Hauksson, research professor of geophysics at Caltech, as well as Daniel Trugman of Los Alamos National Laboratory and Peter Shearer of Scripps Institution of Oceanography at UC San Diego.

To overcome the low signal-to-noise ratio, the team turned to a technique known as "template matching," in which slightly larger and more easily identifiable earthquakes are used as templates to illustrate what an earthquake's signal at a given location should, in general, look like. When a likely candidate with the matching waveform was identified, the researchers then scanned records from nearby seismometers to see whether the earthquake's signal had been recorded elsewhere and could be independently verified.

A magnitude 5.6 earthquake occurred 1375 km north-east of Whangarei, New Zealand on Wed Apr 24 2019 2:20 AM. The quake was 434 kilometres deep and the shaking was unnoticeable close to the quake.

The quake is unnoticeable. 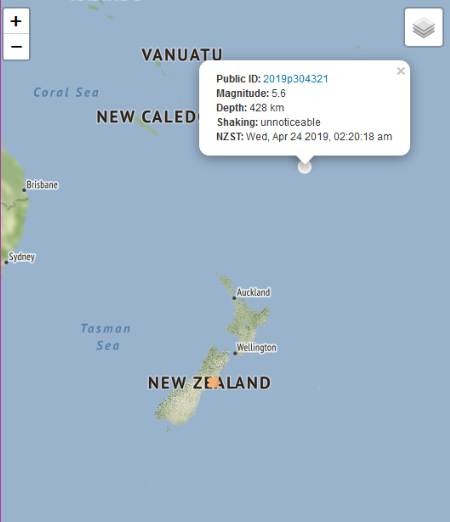 https://twitter.com/i/web/status/1120718949308665857
Translated from Spanish by Microsoft
After several days of relative calm, the #Popocatépetl present continuous emission of vapour, gas and slight ash content moving to the north between Pue And Edo Mex. 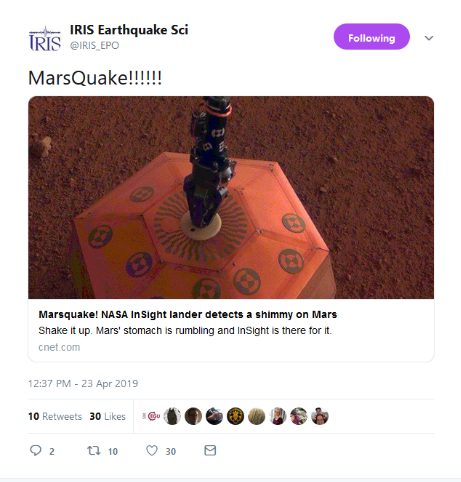 Body forces therefore appear to control the state of stress and thus the location and style of intraplate earthquakes in the central United States with no influence from mantle convection or crustal weakness necessary. These results show that mapping where gravitational body forces encourage seismicity is crucial to understanding and appraising intraplate seismic hazard. 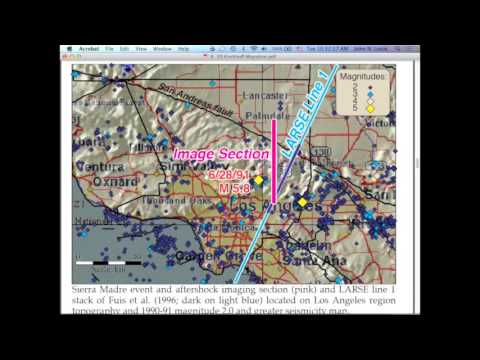