Papua New Guinea lies on the so-called Pacific Ring of Fire - an area in the Pacific Ocean heavily subject to earthquakes and volcanic eruptions. 90 percent of all seismic activities occur in this region.

A 5.5-magnitude earthquake has hit off the coast of Papua New Guinea, according to the European-Mediterranean Seismological Centre.

The tremor occurred at 14:13 UTC. The epicentre of the quake was located at a depth of 76 kilometres and hit a region 77 kilometres east of the town of Panguna. 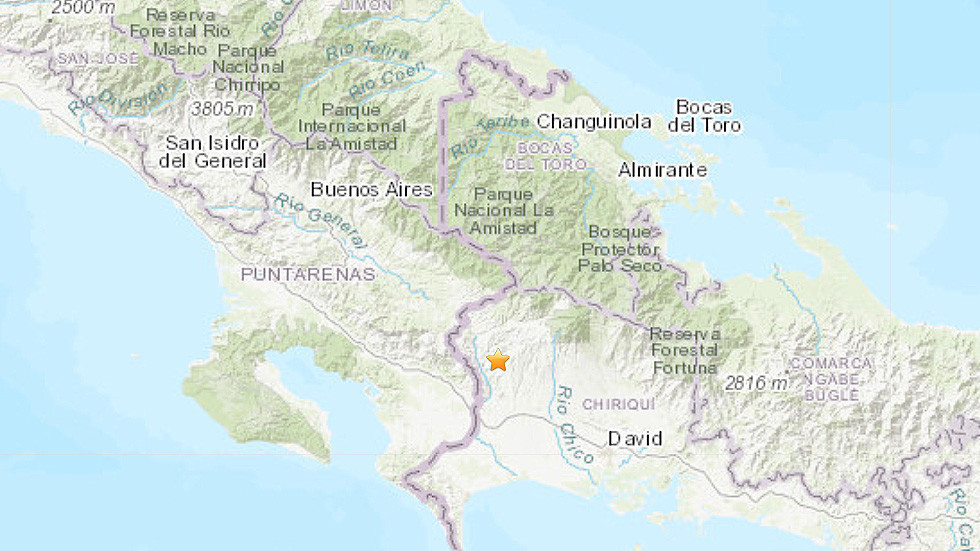 A 6.1 magnitude earthquake has struck the Panama-Costa Rica border region. The wider area around the quake is home to more than 400,000 people.

www.rt.com
A 6.1 magnitude earthquake has struck the Panama-Costa Rica border region. The wider area around the quake is home to more than 400,000 people.

https://twitter.com/i/web/status/1127665839178694656
The quake struck on Sunday afternoon, and was initially reported by the European-Mediterranean Seismological Centre (EMSC) and the US Geological Survey (USGS). The EMSC reported the quake as happening at a depth of 12km below the earth’s surface, while the USGS put the depth at 37 km.

MOSCOW (Sputnik) - A powerful 5.7 magnitude earthquake struck off the coast of Papua New Guinea, the data of the United States Geological Survey showed on Thursday.

The underground shocks were registered at 01:23 GMT, 95 kilometres (59 miles) to the south-southwest of Mount Taron.

The epicentre of the earthquake was located at a depth of 25.3 kilometres. There have been no immediate reports about damage or casualties caused by the quake.

New Guinea is located in a seismically active zone known as the Ring of Fire, which is regularly affected by powerful earthquakes.

A 4.9 magnitude earthquake was felt on Wednesday, May 15 in Israel, which is currently hosting Eurovision 2019, the Euro-Mediterranean Seismological Centre (EMSC) announced.

A 4.9 magnitude earthquake occurred on Wednesday, May 15 in the eastern Mediterranean, the Euro-Mediterranean Seismological Centre (EMSC) announced.

The tremor is also reportedly being felt in Nicaragua's capital Managua, a witness told Reuters.

Authorities in the Central American nation of El Salvador have reported a 6.2-magnitude earthquake, according to preliminary data.

MOSCOW (Sputnik) - A 5.6 magnitude earthquake has hit Bay of Bengal near India, the US Geological Survey (USGS) said on Wednesday.

The earthquake was recorded at 00:39 GMT at the depth of 10 kilometers. The epicenter is 151 miles from Bamboo Flat town in India. There is no information about any damages and victims caused by the earthquake. No tsunami warning has been issued.

Earlier in April, the magnitude 5.9 earthquake struck the northeastern Indian state of Arunachal Pradesh. The epicenter was located 41 kilometers (25 miles) north-west of the city of Along and 175 kilometers north-east of Itanagar and lied at the depth of 10 kilometers (6.2 miles).

There were also no immediate reports of casualties or damage.
Click to expand...

Due to natural gas extraction which started in 1959, Groningen province in the North of the Netherlands has had to cope with over a thousand (1000) earthquakes since 1986 -- most of them minor ones.

Today at 5.50 AM a larger one took place measuring 3.4 on the Richter scale. It now ranks in third place, while the strongest so far (magnitude 3.6) happened in 2012. Gas extraction has since been reduced but not yet stopped altogether while damages, mainly on farms and houses, are mounting. Today's quake yielded 230 damage reports thus far.

Update on the above: two minor aftershocks were registered early this morning and the number of damage reports has risen to over 840.

An earthquake with a magnitude of 5.1 was recorded on Saturday in the central Japanese prefecture of Chiba, east of Tokyo; there is no threat of a tsunami, according to the country's national meteorological department.

The epicenter of the aftershocks was located in the southern part of Boso Peninsula, at a depth of about 40 km.

Data on the victims and the destruction has not been reported yet. The tremors were felt by residents throughout the metropolitan region, including the prefectures of Tokyo and Kanagawa.


https://twitter.com/i/web/status/1132172320230055936
US President Donald Trump arrives in Japan on Saturday for an official visit. It was previously reported that during the four-day visit, which will end on Tuesday, 28 May, the Japanese emperor will host a dinner reception in honour of Trump.

Japan is located in a seismically active zone known as the Ring of Fire and regularly suffers from powerful earthquakes. The 2011 9.0-magnitude earthquake and the following tsunami killed over 15,000 people and caused the Fukushima nuclear plant disaster.
Click to expand...

MOSCOW, May 25. /TASS/. An earthquake of magnitude 5.1 was recorded on Saturday near the Kuril Islands, according to the European-Mediterranean Seismological Center.

According to the Center, the source of the elements lied at a depth of 10 km. The tremors were recorded 149 km south of the city of Severo-Kurilsk (population of around 2,500 inhabitants).

There was no information about the victims, the destruction or the threat of a tsunami.
Click to expand...