Moderator
FOTCM Member
A big one in South America!

RT Spanish is reporting that according to USGS it is the strongest earthquake on the planet this year. 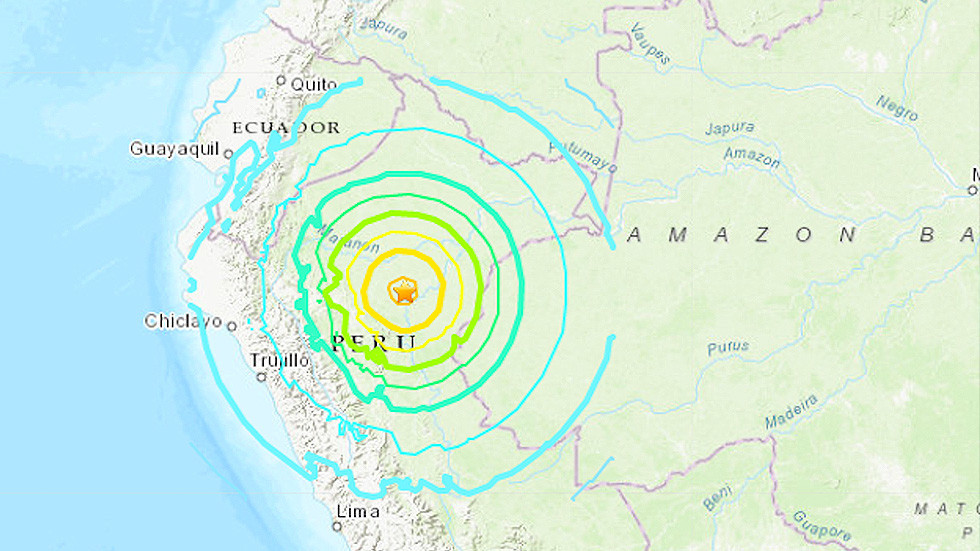 An 8.0-magnitude earthquake struck northern Peru early on Sunday at a depth of just over 100 kilometers, according to the United States Geological Survey, killing 1 person and injuring 11 more.

Windmill knight said:
A big one in South America!

RT Spanish is reporting that according to USGS it is the strongest earthquake on the planet this year.
Click to expand...

This figure illustrates how the two blocks separated by the seismic fault are displaced during the earthquake. These movements are deduced from the SCARDEC focal mechanism, on the two possible fault planes. Additional information (tectonics, near-fault measurements) is required to determine which one of these two hypotheses corresponds to the real movements during the earthquake.
Click to expand...

May 30, 2019 - Strong quake strikes off El Salvador, no initial reports of damage 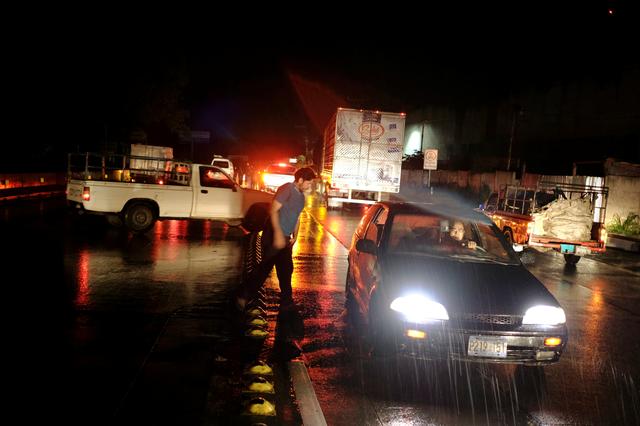 An earthquake measured at 6.6 magnitude struck off the coast of El-Salvador early on Thursday, though emergency services in the Central American country said there were no initial reports of significant damage.

Second update on the recent Groningen earthquake in the Netherlands: the number of damage reports now totals 2,875 cases. 82 of the reports were about acutely unsafe situations and at 14 addresses the inspectors found such dire situations that temporary safety measures were immediately taken.

Six earthquakes in the space on two hours, the first with a magnitude of 5.3 shook south-eastern Albania on Saturday, injuring four people and causing damage to 100 houses, authorities and eyewitnesses said. 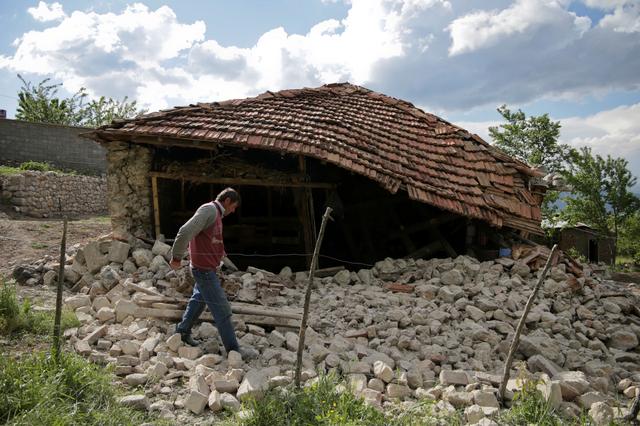 A man walks outside a damaged building after an earthquake stroked the area in Floq, Albania, June 1, 2019. REUTERS/Florion Goga

FLOQ, Albania - “It was 06:30 when I went out to milk the cows when the earthquake struck. I woke up the children and the adults and we ran outside, all of us,” Petrit, 60, reported in the village of Floq, the epicenter of the earthquakes.

The first earthquake had its epicenter 15 km southeast of the town of Korce at a depth of 14 km and was followed by another seven minutes later at a depth of 18 km in an area bordering Greece and North Macedonia.

Lower intensity tremors continued in Korce and the southern area of Gjirokaster, on the border with northern Greece.

angelburst29 said:
Six earthquakes in the space on two hours, the first with a magnitude of 5.3 shook south-eastern Albania on Saturday,
Click to expand...

Magnitude 6.2 quake strikes off Indonesian island of Sumatra: USGS
A magnitude 6.2 quake struck southwest of Indonesian city of Sibolga on the island of Sumatra on Monday, the U.S. Geological Survey said. There were no immediate reports of casualties or damage. There was also no tsunami warning from the Hawaii-based Pacific Tsunami Warning Center immediately after the quake. 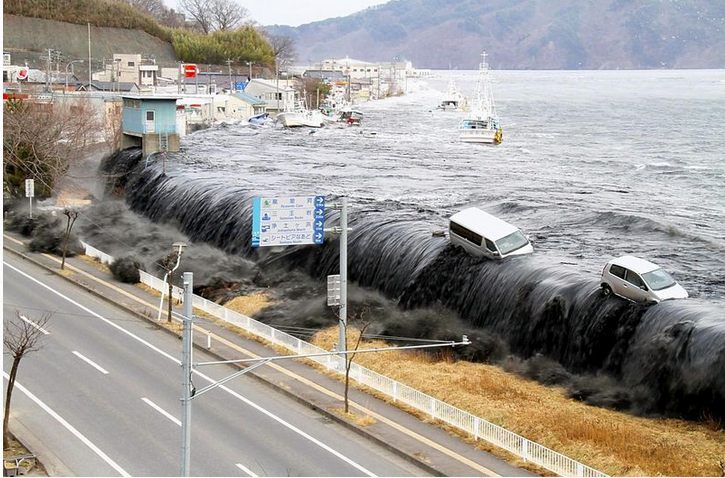 Courtesy of the Miyako city government An image from the Iwate Earthquake Tsunami Archive shows a black tsunami that hit Miyako, Iwate Prefecture, in March 2011.
7:11 pm, May 30, 2019
A possible major earthquake in the Nankai Trough could cause a “black tsunami” in Tosa Bay in Kochi Prefecture that would be higher than a government projection, according to a study by a group of researchers from Tohoku University, Kansai University and other institutions.

In the 2011 Great East Japan Earthquake, it is said that a black tsunami swamped bays and river mouths in Miyagi and Iwate prefectures and resulted in greater damage than an ordinary tsunami would cause. The study’s findings on the Nankai Trough quake, the focus of which could be in offshore areas ranging from the Tokai region to the Kyushu region, are likely to increase calls to strengthen measures against disasters.

The research team presented the findings at this year’s Japan Geoscience Union meeting in Chiba on Wednesday.

A black tsunami is one that contains seafloor sediment, among other things, and is likely to occur at such locations as ports and harbors and mouths of rivers, where sediment has accumulated. Such a tsunami is known for being heavier and more destructive than one containing mainly seawater.

The researchers, including Kei Yamashita, an associate professor of tsunami engineering at Tohoku University, calculated by computer the amount of sediment contained in black tsunami, based on cases such as one at Kesennuma Bay in Kesennuma, Miyagi Prefecture, which was hit by a tsunami surging about 10 meters high in the Great East Japan Earthquake.

After simulating how sediment would move from Tosa Bay in the Nankai Trough quake, the researchers found that the sediment, up to 10 meters in depth, would be swept up near the river mouth and hit the coast along with the tsunami.

The sudden removal of the sediment from the ocean floor would effectively make those areas deeper, allowing massive additional amounts of seawater to flow in, thus swelling the water-and-sediment tsunami to even greater size.

According to the research team’s mathematical simulations, the tsunami is projected to be about 13 meters high near the mouth of the Monobegawa river running through Nankoku and Konan in Kochi Prefecture, about two meters higher than the figure projected by the government, and about 12 meters high near the mouth of the Ni- yodogawa river in Kochi city, about one meter higher than a government projection. It is feared that the downtown areas in Kochi city could suffer more damage than the government has projected.

Makoto Okamura, a professor emeritus of earthquake geology at Kochi University, said: “Seafloor sediment has been discovered in deposits from past Nankai Trough earthquakes. The impact of black tsunami should be considered.”Speech 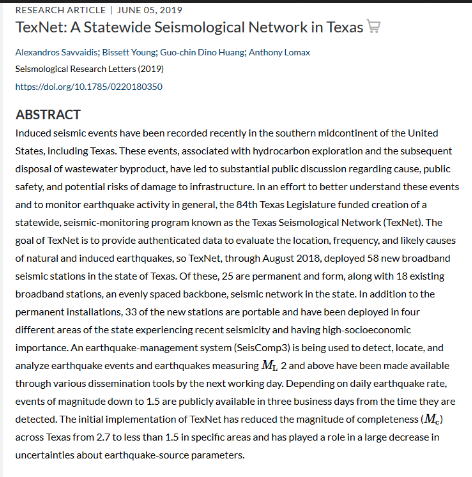 A 5.5-magnitude quake rocked New Zealand's Alpine Fault early on Sunday and was felt in the tourist areas of Queenstown and Wanaka, a statement by New Zealand Geonet says.

New Zealand's Earthquake Monitoring Service has issued a warning after the quake.

"This fault system has the potential for larger events and we would like to make sure that you are prepared for a large earthquake at all times," New Zealand Geonet said.

No damage has been reported so far.

According to the Straits Times, the Alpine Fault runs 600km along the entire spine of New Zealand's Southern Alps and has a record of rupturing every 300 years.

FOTCM Member
About 17 miles from where I live there was a 3.4 earthquake near Mifflintown, PA. It was about 17 miles from me and some here felt it although I was probably on the road at the time and didn't notice anything.

Nearby Places
Mifflintown has had: (M1.5 or greater)
The largest earthquake in Mifflintown:

The quake, which hit an earthquake-prone area, was very shallow and struck 51 miles (82 km) west of Coquimbo, the USGS added. The quake was initially measured at 6.4 magnitude.

goyacobol said:
About 17 miles from where I live there was a 3.4 earthquake near Mifflintown, PA
Click to expand...