The epicenter of the earthquake was off the coast of Chiba prefecture, adjacent to Tokyo, the agency said, adding that a tsunami warning had not been issued.

The quake, which hit at 9:16 a.m. (0016 GMT), had a maximum intensity of 4 on Japan’s 1-7 scale, including in parts of central Tokyo. There were no were immediate reports of damage.

After the 7.3Mw USGS Strong Earthquake in the Banda Sea in Indonesia it is reported that it was also felt in Darwin in northern Australia to a video where several people evacuated after feeling the shocks of the earthquake 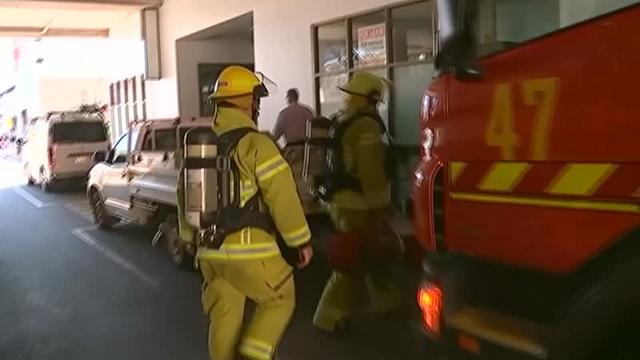 A powerful, deep 7.5 magnitude earthquake struck off the coasts of East Timor and Indonesia on Monday, and was felt as far away as Australia, but authorities said it did not have the potential to cause a tsunami.

Strong shaking caused alarm in the East Timor capital of Dili prompting people to run out of their houses, a Reuters witness said, but there were no immediate reports of damage, injuries or deaths.

The quake struck in the Banda Sea in Indonesia and was felt across northern Austria. In Darwin, around 435 miles away from the epicenter, it hit at lunch time and office workers sought safety outside. No damage or injuries were reported.

The quake, initially recorded at a magnitude of 7.2, was at a depth 220 km (136 miles), the U.S. Geological Survey (USGS) said. Due to the quake’s depth there was no tsunami threat, said the Hawaii-based Pacific Tsunami Warning Center.

The Indonesian geophysics agency recorded at least one aftershock measuring over magnitude four on the Richter scale.

The quake was also felt on Indonesia’s holiday island of Bali.

Earlier on Monday, a strong quake of magnitude 6.1 struck the eastern province of Papua but no deaths were reported.

FOTCM Member
The Ring of Fire is active and the quakes are moving around likely triggering each other. The latest in the Ring:

The epicenter was 44 km (27 miles) west of the city of David in Panama at a shallow 14.2 km (9 miles), it said. There were no immediate reports of damage or casualties. It originally put the magnitude at 6.4.
A "According to Obninsk urgent reports , three earthquakes were registered in Kamchatka over the last 24 hours. None of them generated tsunamis, and none were felt in local settlements. Residents did not report anything to regional emergency services," the ministry said.

On June 25-27, Kamchatka was rocked by several earthquakes of 6.0 magnitude and higher. No injuries or damages were reported, and no tsunami alert was issued. Experts said that earthquakes in the area may continue for the next several days.


https://twitter.com/i/web/status/1146309149933756416
Translated from Spanish by Microsoft
Final magnitude: 4.7 (SSN) with epicenter 18 km southeast of Acapulco, Guerrero. Detected by @RedSkyAlert"moderate" intensity at the epicentre and "mild" in surrounding areas. 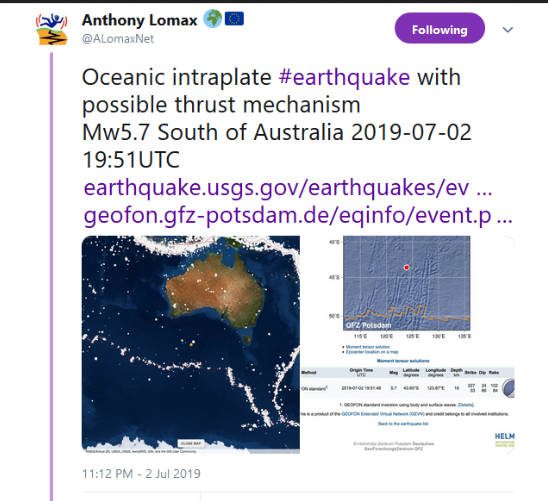 FOTCM Member
Here is some more about the Earthquake off the coast of Canada:

According to the United States Geological Survey, a strong 6.5-magnitude earthquake rocked Vancouver Island in the Canadian province of British Columbia.


https://twitter.com/i/web/status/1146640362007683072
There was no tsunami warning and there weren't any immediate reports of damage or casualties resulting from the quake.

FOTCM Member
6.6 Near China Lake Naval Air Weapons Station, with many after shocks.