MOSCOW (Sputnik) - A 6.3-magnitude earthquake was registered on Sunday off the coast of New Zealand, according to the US Geological Survey (USGS).

The tremor occurred at 05:17 GMT, with the epicentre located 93 kilometres (57 miles) northeast of L'Esperance Rock at a depth of 35 kilometres. There are no reports of any damage, or victims caused by the earthquake.

The hit comes after several hours earlier two other earthquakes were registered in the region – one of 7.2 magnitude hit almost at the same part of ocean near L'Esperance Rock, and another near the shore of the Kingdom of Tonga.


https://twitter.com/i/web/status/1140157624580751360
New Zealand is located in a seismically active zone known as the Ring of Fire and regularly suffers from powerful earthquakes.
Click to expand...

The epicentre of the earthquake was located in the Ibaraki Prefecture at the depth of 80 kilometres (about 50 miles), according to the JMA.

No tsunami alert has been declared. There is also no information about any damages and victims caused by the earthquake.

Japan is located in a seismically active zone known as the Ring of Fire and regularly suffers from powerful earthquakes. The 2011 9.0 magnitude earthquake and the following tsunami killed over 15,000 people and caused the Fukushima nuclear plant disaster.
Click to expand...

The island nation is located in a seismically active zone known as the Ring of Fire and regularly suffers from powerful earthquakes.

The 6.2-magnitude earthquake struck eastern Indonesia, 133 km (83 miles) northwest of the city of Kupang on Timor Island, according to the European-Mediterranean Seismological Centre (EMSC).

At the moment, authorities have not issued a tsunami warning, and there are no reports about casualties or material damage inflicted by the natural disaster.

Ambassador
FOTCM Member
And yet another one off the coast of New Zealand, whcih must be the 3rd at 6.0 or above within the last 2-3 days near NZ:

Edi: Changed it from 4th to 3rd, as the other I was thinking of was in Tonga.

Aeneas said:
And yet another one off the coast of New Zealand, whcih must be the 3rd at 6.0 or above within the last 2-3 days near NZ:
Click to expand...

FOTCM Member
Already at SOTT 'Since when does Ohio get earthquakes?' Magnitude 4.0 earthquake shakes near Cleveland another two little ones

The first magnitude 5.9 quake was followed around 30 minutes later by one registering 5.2, both at a depth of 10 km (six miles) and centered near Changning county, according to the United States Geological Survey.

Chinese state media said shaking was felt in major cities in the region, including in the Sichuan provincial capital Chengdu and the metropolis of Chongqing. The China Earthquake Administration said there were several aftershocks.

Pictures posted by state media on their social media accounts showed cracks in some buildings and people rushing into the streets in some cities in Sichuan.

State television said rescuers had reached the epicenter - a largely rural area - and had pulled some people out of rubble alive already. At least one person so far has died, the report added, without giving details.

Tweeted footage of the Damage 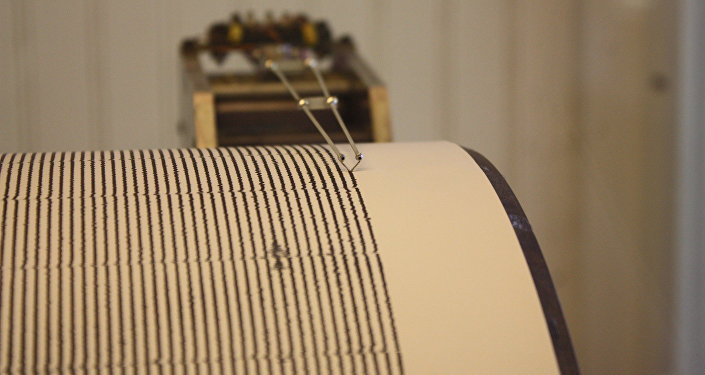 Japan is situated in the so-called 'Ring of Fire ' notorious for it's increased seismic activity. The 50,000 kilometres belt around the rim of the Pacific Ocean gets...

Japan's meteorological agency has issued an advisory for a 0.2-1.0 metre tsunami along the northwest coast of Honshu Island.
The earthquake struck at a depth of 10 kilometres with shocks being felt throughout most of Niigata Prefecture.
There were no immediate reports of damage or casualties caused by the quake. 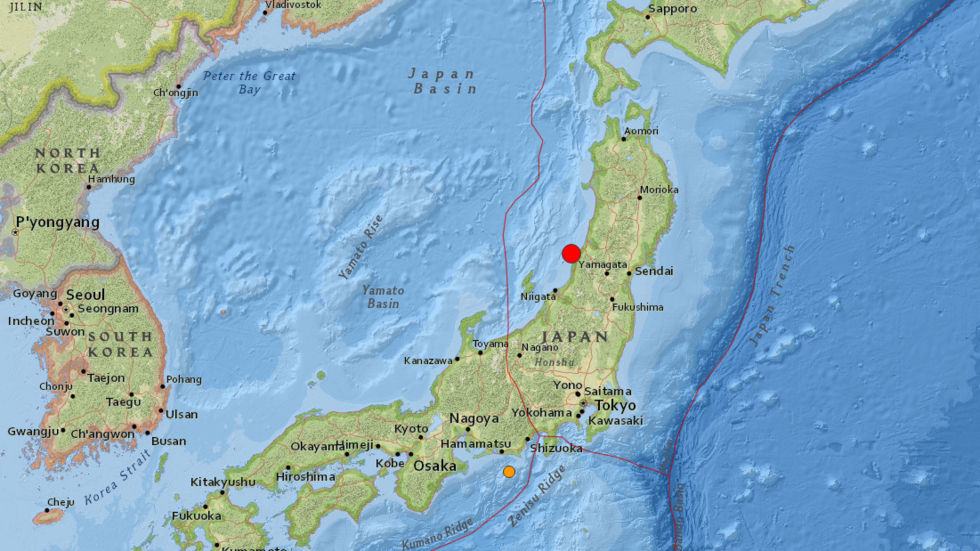 A 6.5-magnitude earthquake struck in the Sea of Japan, triggering a brief tsunami warning in some areas. Waves were expected to reach heights of around 0.2 to 1 meter, but they turned out to be minor. 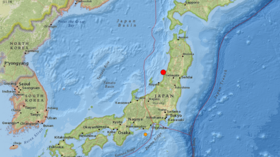 A 6.5-magnitude earthquake has occurred in the Sea of Japan. The powerful jolt triggered a tsunami warning across the island nation.
The quake occurred off the west coast of the largest Japanese island, Honshu. According to preliminary reports, the epicenter was just 5km below the ground.
A tsunami advisory has been issued for Yamagata and Niigata Prefectures and the Noto area of Ishikawa Prefecture. The tsunami is expected to reach a height of around 0.2 to 1 meter, according to Japan’s meteorological agency.

Here’s the shake map via @nhk_news. (The numbers measure intensity at those locations and a 6 means “less earthquake-resistant houses collapse” and similar buildings can suffer extensive damage. pic.twitter.com/tIeyGwKAAc 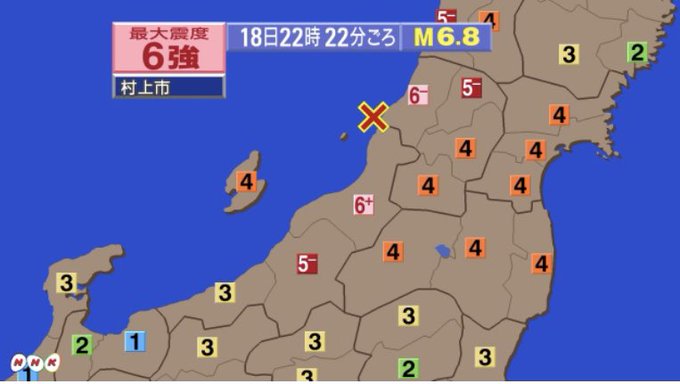 36 people are talking about this

https://www3.nhk.or.jp/nhkworld/en/news/20190619_02/?fbclid=IwAR3tjyBo0ect7j-yLouTbWGFhPOYWVLON3dWdWFZP2NuOImHxZTyGG4EksM said:
A magnitude 6.8 quake has struck off the coast of Yamagata Prefecture in northern Japan. A strong jolt was felt over wide areas of the region.

Officials say tsunami up to one meter high are expected along the coasts of Yamagata, Niigata and Ishikawa Prefectures.

Tohoku Electric Power Company says the earthquake has caused a blackout in parts of northern Japan. It says about 5,900 households in Yamagata Prefecture and 3,200 households in Niigata Prefecture are without power.
Utility companies in the affected area say there are no irregularities at their nuclear power plants, including Fukushima Dai-ichi.
Click to expand...

Ambassador
FOTCM Member
Yet another from the north of New Zealand. It would most likely be considered an aftershock even if this one is 6.4. The initial one was at 7.2, which is close to 10 times as strong as this one. Edit: it would be about 6 times stronger, not 10.

The quake struck 180 km (110 miles) south southeast of Raoul at a shallow depth of 10 km, USGS said. The area is hit by frequent quakes.

Ambassador
FOTCM Member
In light of the 1000 small earthquakes around California in the last month this development today caught my attention:

And these are not small quakes and the last 5 within a couple of hours of each others. Is it a sign that something major is brewing on the Eastcoast of the US? Okay, they will be releasing some tension, but that is extremely minor. Could they be forerunners or foreshocks?