FOTCM Member
Maybe the next one they will unveil is the UFO with the letters UFO on its side. That one from John Keel is a hoot.

I found Richard Dolan's take on this admission interesting. As the "programming is complete", the response was a bit "meh, a storm in a teacup", or even indifference. But that's just the general response. Apparently, according to Dolan, TTSA have been hard at work in getting this information released, along with the US Navy. I think I read on Cass before that the Navy were the hardest element in the defence industry to control completely. I think his main point is that it's very hard to keep such a secret indefinitely, but how such leaks are received by the public is a different matter entirely.

Personally speaking, I cannot wait for a full disclosure, I want this can of worms spilt out into the public. I've had conversations with people where they've said "you're irresponsible, this could drive people insane", but what about the people who have been abused and castigated for their convictions from the other side of the argument? Many have suffered ruined lives for chrissakes! Who speaks for them?! The phenomenon is real, and many of us know this, but we have to walk through life like esoteric ninjas, avoiding the topic of topics. I saw a UFO in 2004, and have had to live like a ninja ever since (sorry for the rather crass analogy), tiptoeing around other people's sensibilities.

Administrator
Moderator
FOTCM Member
Popular Mechanics (I know!) wrote extensively about it in February. Timeline and some interesting details on why there won't likely be any disclosure, and how DOD, Pentagon and government outsource some critical research to privately owned companies so to evade FOIA. While we can't expect anything groundbreaking from PM, the series of 3 long articles loaded with links and info from interviews puts a lot of material nicely in one place.

FOTCM Member
And now we have this. Coincidence?

Persej said:
And now we have this. Coincidence?

The flag is a hoot- combined NASA and Star Trek emblems. Do we get phasers to go with it?

Ambassador
FOTCM Member
Today there is this being shared on all mainstream media sites: 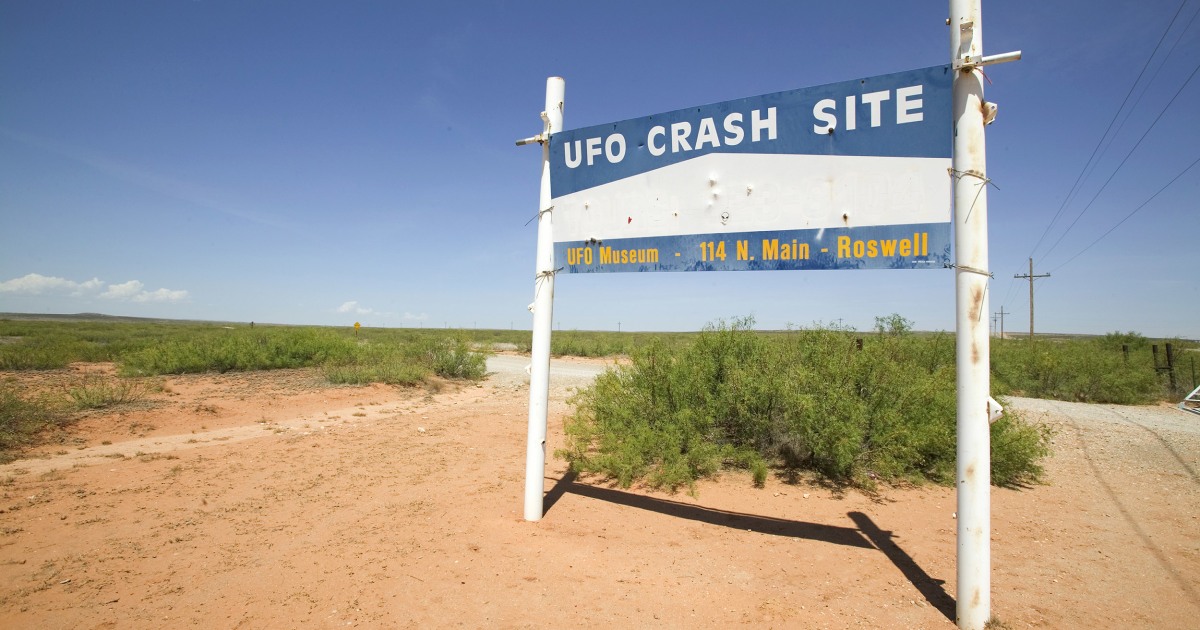 The president was asked by his eldest son whether he would declassify information about the New Mexico location.

President Donald Trump says he’s heard some interesting things about Roswell, but he’s not sharing even with his eldest child.

Trump made the comments Thursday in a Father’s Day-themed interview with his son Don Trump Jr., hosted by the president’s reelection campaign. Don Jr. wound down his interview by jokingly asking his Dad/President if he would ever divulge more information about Roswell, the New Mexico city known for its proximity to arguably most famous UFO event — “and let us know what’s really going on.”

Trump responded, “I won’t talk to you about what I know about it, but it’s very interesting.”...

The president in the past has spoken skeptically about the possibility that there is something out there. Last year Trump said he received short briefing on UFO sighting, but also offered: “People are saying they’re seeing UFOs. Do I believe it? Not particularly.”

After his father offered that he heard some “interesting” things about Roswell, Trump Jr. asked the president might declassify that information someday.

“Well, I’ll have to think about that one,” the president responded.
Click to expand...

There is a very good commentary/analysis on this video availble:

Tycho said:
There is a very good commentary/analysis on this video availble:

Interesting, Tycho- thank you for the post. While I am not an expert I would suggest that if some video footage has been removed, just around the time the FLIR blackouts occurred the Nimitz aircraft pilot may have attempted to achieve a target lock on the UAP - not with intent of actually firing on the object, necessarily but just in case the object began to exhibit hostile intent action could be taken.
The UAP took exception to a perceived threat and took mild counter measures, temporarily disabling the aircraft sensors and fire control.
The UAP could obviously have done a number of things other than that- like simply out distance or out maneuver the aircraft, or simply disappear as they are wont to do. In my opinion a subtle message was being sent- that whomever or whatever controls the UAPs, we cannot touch them- I am confident even if a missile had been successfully fired it never would have reached the target. It would have been disabled or destroyed, or the object would simply evade it.
They, whomever “they” are obviously do not care if they are observed, and have demonstrated they can foil our attempts to do anything that would prove dangerous to them.
You must log in or register to reply here.
Share:
Facebook Twitter Reddit Pinterest Tumblr WhatsApp Email Share Link
Top Bottom