Is China Preparing a 'Special Military Operation' In Taiwan?

Candice said:
I was wondering if they were handing Taiwan over in exchange for the Chinese lessening support for Russia.
Click to expand...

Maybe, only they know but this article this morning from RT, https://www.rt.com/business/560445-china-russia-exports-soar/ seem to imply the opposite.

The show is sure getting more interesting by the days so let keep our eyes open and enjoy it.
S

Candice said:
I agree, Pelosi’s little theatre “spectacle” definitely appeared to be due to some deal made with the mainland, a “handover” as the article says. I just couldn’t figure out what the Americans were getting in return, the article provides an interesting theory but I don’t think it’s solely that. I was wondering if they were handing Taiwan over in exchange for the Chinese lessening support for Russia.
Click to expand...

I think Russia being an ally to China is a more priced possession than Taiwan. Ultimately as soon as the globalists break up Russia, next country in line will be China.

FOTCM Member
I’ve been feeling the familiar itch that we are being played on this one…which we are of course, but just how? Russian and now China feel very much like a script being run. Some good points have already been brought up on this thread and let me add a few more curiosities to the mix.

Why are all the main power countries quietly in the background still marching forward with the covid hoax…even Russia?

Why are thousands of restrictions put on Russia for import and export, but US weapons parts that Russian needs to build weaponry are not sanctioned at all? Russian being assisted by the US in building of its weapons while also flooding Europe and the middle east with weapons. (?)

It does make sense that Nancy Pelosi's visit could have de facto nicely handed Taiwan over to China and may have opened the door for a war and partial takeover of the US. All while making China look pretty much like the good guys.

China and the WEF recently had very congenial meeting, where China had nothing but good things to say about the WEF. And Russia appears to be fighting against the WEF.

The think tanks “don’t know” that every beating Trump gets only drives his support up?

Was Norfolk Naval base in the US surrendered to NATO?

While NATO’s Joint Force Command (JFC) Norfolk did, according to Defense News, become fully operational in mid-July, this headquarters is only one part of the naval complex at Norfolk. There is no indication NATO now controls the entire Naval Station Norfolk, which the U.S. Navy describes as the world’s largest naval complex.

It clearly outlines the claims of the Mainland and their goal of reunification, which they of course would prefer to be peaceful.

I just keep thinking how every “Taiwanese” voice I see on twitter etc. are from either Taiwanese Americans or other duel nationalities, the wealthy and privileged and never the voices of normal Taiwanese.

I keep thinking how after the DPP won and in retaliation the mainland put in policies to limit tourists to Taiwan, how this and the after effects of the big Hualien Earthquake and almost three years of extreme covid policies have really hurt local tourism. Most people in my area earn money through tourism. Reunification would open the flood gates to the Chinese tourist buses once again and I’m sure most local people would welcome that over war and “independence”. But just like around the world people need to suffer until they all say “no more”, like the Europeans and their sanctions boomeranging their economies, like how much suffering until “enough is enough”?

Candice said:
I was wondering if they were handing Taiwan over in exchange for the Chinese lessening support for Russia.
Click to expand...


SOTTREADER said:
Ultimately as soon as the globalists break up Russia, next country in line will be China.
Click to expand...

I wouldn't paint the devil on the wall. Or in other words: let's hope they will not and can not break up Russia specifically, and more broadly speaking, China as well. IMO, as it stands now, I don't think anything like that is likely to happen anytime soon. In fact, as it stands now, pretty much the opposite seems to take place: Russia and China are strengthening their positions and thereby making it less likely that the US empire will be able to break those countries.

SOTTREADER said:
I think Russia being an ally to China is a more priced possession than Taiwan. Ultimately as soon as the globalists break up Russia, next country in line will be China.
Click to expand...

I wouldn't paint the devil on the wall. Or in other words: let's hope they will not and can not break up Russia specifically, and more broadly speaking, China as well. IMO, as it stands now, I don't think anything like that is likely to happen anytime soon. In fact, as it stands now, pretty much the opposite seems to take place: Russia and China are strengthening their positions and thereby making it less likely that the US empire will be able to break those countries.
Click to expand...

Think that what SOTTREADER wanted to emphasize regardless of how he expressed it, was how difficult it was for China to be breaking ties with Russia in exchange for Taiwan since it is aware of the globalist plans to destroy both nations, and more than a reality, what he wanted was to describe the plan itself.
Regarding china it is a matter of seeing how they have been attacked on more than one occasion with certain pathogens and how it has been one of the few, if not the only country that has called to investigate matters related to biological weapons in Ukraine, in addition to being openly hostile China against the United States in the declarations of its spokespersons... although the idea to play that Pelosi is an agent paid by China is a interesting idea, I think the issue is more about the fact that the deep state has its own agenda and refuses to lose despite the unfavorable scenarios towards them and although there could be other "more cosmic" reasons, the explosion and reactivation of armed conflicts simultaneously seems to me to indicate that they go all out to trigger hunger and other problems.
Last edited: Aug 10, 2022

"The People’s Liberation Army (PLA) said on Wednesday that it had “successfully completed various missions during recent drills around Taiwan island and effectively tested the troop’s joint operation combat capacity,” as reported by the Global Times.

A few hours ago, the PLA Air Force carried out one of the most massive drone attacks in history. A swarm of twenty-five Chinese CH-4 reconnaissance and strike UAVs sent to Taiwan was in the area of the island's border for a long time. This, taking into account the weapons available to these drones, would allow China to instantly launch about a hundred strikes on the island's infrastructure, for example, in order to disable radar and air defense systems, without risk to the pilots of the Chinese Air Force.
In the presented image, you can see the route of movement of a group of 25 Chinese CH-4 attack unmanned aerial vehicles. According to preliminary data, the drones were controlled synchronously. This means that with just one command, drones could simultaneously strike at already identified targets. Moreover, given that drones have an automated target detection system, drones could well be used to correct strikes by operational and tactical missile systems on identified targets.
Taking into account the number of strike drones in service with the PRC, an attack on the island of Taiwan could be on a much larger scale – for obvious reasons, the island's authorities would not be able to oppose anything to Chinese drones.
Click to expand...

China has already sent planes and ships to surround Taiwan, for the moment the military equipment has only been sent to the strait that forms between the two territories.

"Adding to current tensions, starting last Tuesday Undersecretary of Defense for Policy Colin Kahl confirmed that the US Navy will soon conduct another "freedom of navigation exercise" through the contested Taiwan Strait, despite an ongoing heavy Chinese military presence."

"China says a visit of Chinese Taipei (Taiwan) by a group of American legislators has fully exposed Washington’s true face as the spoiler of peace in the strategically-sensitive Taiwan Strait."

China says US lawmakers’ visit of Taiwan has fully exposed Washington’s true face as spoiler of peace in the Taiwan Strait.

The United States is really looking for problems wherever it can...
Everywhere they go there is disaster and chaos...

"The spokesman also pointed out that, after Pelosi’s trip to Taipei, over 170 countries have reiterated their commitment to the “One China” principle and have supported Beijing" (I believe there are only 193 countries total in the world. So, wow!)

"Putin criticized Pelosi’s Taiwan visit as being a “carefully planned provocation” during the 10th Moscow International Security Conference on Tuesday."

"Wang noted that Putin’s position reflected the high-level strategic cooperation between China and Russia and was a manifestation of the “consistent and firm mutual support” of the two countries on issues relating to each other’s key national interests." 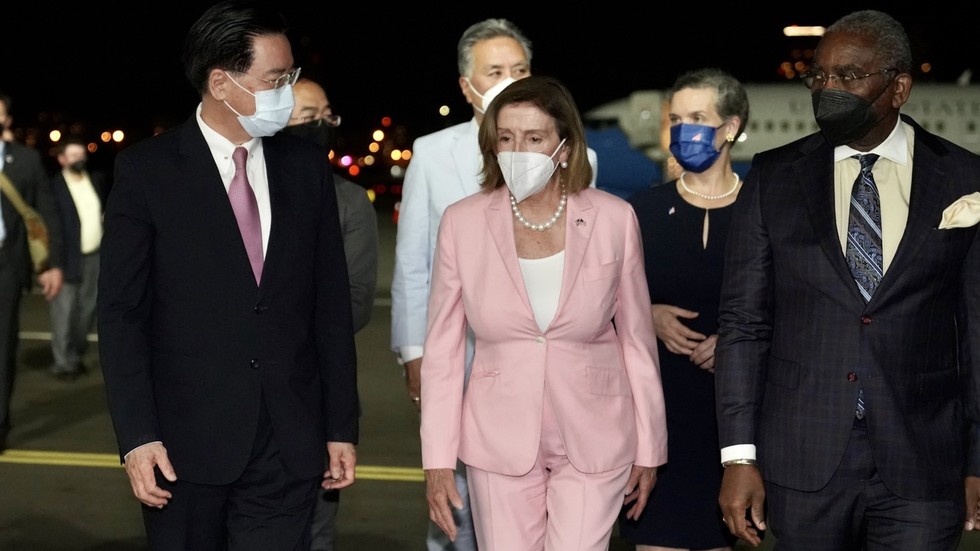 "The People’s Liberation Army will send personnel to Russia, expecting the event to “deepen pragmatic and friendly cooperation with the militaries of the participating countries, enhance the level of strategic coordination among the parties, and enhance the ability to deal with various security threats,” a statement said. Beijing noted that current regional and international tensions did not affect its decision."

"Vostok 2022 will take place at 13 locations in eastern Russia between August 30 and September 5, the Russian Defense Ministry announced in late July. It said foreign militaries were invited, but did not specify nationalities. The Chinese statement mentioned Belarus, India, Mongolia and Tajikistan among the guests."