FOTCM Member
They think Russia overstretched itself in Ukraine. Try pushing your luck and find out.

NOW – Multiple Armenian Towns including the City of Jermuk are now reportedly under Heavy Assault from Azerbaijani Artillery and Ground Forces.
Click to expand...

bjorn said:
They think Russia overstretched itself in Ukraine. Try pushing your luck and find out.
Click to expand...

Maybe at least it will be possible to slow down here, although there are still a couple of points of tension on the way. Tajikistan-Kyrgyzstan and Georgia.

"With the involvement of the international community, it was possible to reach an agreement on a ceasefire," Grigoryan said (quoted by RIA Novosti).

It is noted that the agreement came into force from 20:00 on September 14. The Secretary of the Security Council expressed hope that Baku will comply with it.

However, the protests are still ongoing. In Yerevan, protesters from the podium read out the names and surnames of deputies who, in their opinion, should sign the impeachment of Prime Minister Pashinyan.

Moderator
FOTCM Member
FWIW, an article at the Cradle.

Can Iran push Russia to action in the South Caucasus?

Moscow and Tehran’s mutual ally, Armenia, is feeling the pressure of NATO-backed Azerbaijan’s assault on its sovereignty. It is in both country’s geop

FOTCM Member
Are they interviewing for a new protector?

First: Russian sent peacekeepers to Nagorno Karabakh THEN hostilities broke on the Armenian side of the boarder, and there were dead and wounded from both sides. Where were the Russian peacekeepers? I've not seen an answer to that yet.

Second: Russian sends an emissary. Makes a plan. Then leaves. Maria Zakharova said we made a plan, it’s up to them (Azerbaijan and Armenia) to decide what to do. Not Russia. When asked what the plan was, she said. It was not to be disclosed. Up to them.

Then: Pelosi from the US shows up and says, we’ll help. Blinken was said to have had a meeting with Pashinyan at the UN, but it turned out to be only 28 seconds long, and virtually said nothing.

Then: Marcon and the EU offers to assist.

An agreement was made today by the EU as follows: (But only for 2 months?)

"BRUSSELS, Oct. 17. /TASS/. The foreign ministers of 27 EU countries have agreed to set up a monitoring mission to solve problems on the Armenia-Azerbaijan border, the EU Council said in a statement released on Monday."

"The Council today decided to deploy up to 40 EU monitoring experts along the Armenian side of the international border with Azerbaijan with the objective of monitoring, analysing and reporting on the situation in the region," the statement said."

"The EU stressed that the decision to set up a monitoring mission to the region followed a meeting between the leaders of Armenia, Azerbaijan, France and the head of the European Council in Prague on October 6 and "is aimed at facilitating the restoration of peace and security in the area, the building of confidence and the delimitation of the international border between the two states."

"The EU Council explained that for the rapid deployment of the mission, "it was decided that the monitoring experts will be temporarily deployed from the European Union Monitoring Mission in Georgia (EUMM Georgia)". "The monitoring mission will have a temporary nature and in principle will not last more than two months," the statement emphasized."


Is Amenia/Azerbaijan switching their protector from Russia to the EU? Or is the EU trying to buddy up with Turkish/Azerbaijan/Russia future gas barons and winners? The EU Council explained that for the rapid deployment of the mission, "it was decided that the monitoring experts will be temporarily deployed from the European Union Monitoring Mission in Georgia

Iran Is Conducting "Massive" Military Drills On The Azerbaijan Border​

(Here are a few excerpts from the article, and remember the Israelis are also in Azerbaijan (with permission) keeping an eye on the Iranians?)

Iran Is Conducting "Massive" Military Drills On The Azerbaijan Border

"Iran will not permit the blockage of its connection route with Armenia,

The exercise indicates that “the armed forces’ determination to confront any regime that wants to cut Iran’s land connection with Armenia is serious,” tweeted Iranian military analyst Hossein Daliran.

While Tehran has for some time been warning Azerbaijan about its threats to Armenia, in recent days its talking points have incorporated a new perceived threat in the Caucasus: the “European military presence.”

The “European military presence” would seem to be a reference to a new European Union monitoring mission that began deploying to Armenia this week. That mission will be modest – 40 members, with a two-month mandate – but it seems to have spooked Iran. More Europeans could be coming: the Organization for Security and Cooperation in Europe announced that it would be sending an “assessment mission” to Armenia between October 21 and 27.

How the European presence in Armenia may change Iran’s strategic calculations remains to be seen. But Armenia continues to count on support from Tehran.

“Iran's principled position regarding the inevitable need to protect Armenia's internationally recognized borders and territorial integrity and to condemn the recent military aggression undertaken by Azerbaijan was emphasized,”

Putin invites leaders of Armenia and Azerbaijan for talks​

"The trilateral summit will provide an opportunity to discuss “alarming trends” in the region, the Foreign Ministry said"

"Putin invites leaders of Armenia and Azerbaijan for talks
The trilateral summit will provide an opportunity to discuss “alarming trends” in the region, the Foreign Ministry said"

"spokeswoman Maria Zakharova, who confirmed the news on Monday, Moscow is concerned about the “alarming trends” in the region, “where the West is clearly trying to transfer the confrontational schemes tested in Ukraine.”

"Commenting on the process of bringing the decades-long conflict between Armenia and Azerbaijan to an end, the spokeswoman accused the West of pursuing a “tactless and aggressive” approach."

“The true goals of Washington and Brussels are by no means the search for a compromise or balanced solutions, but self-promotion and squeezing Russia out of the South Caucasus,” Zakharova claimed." 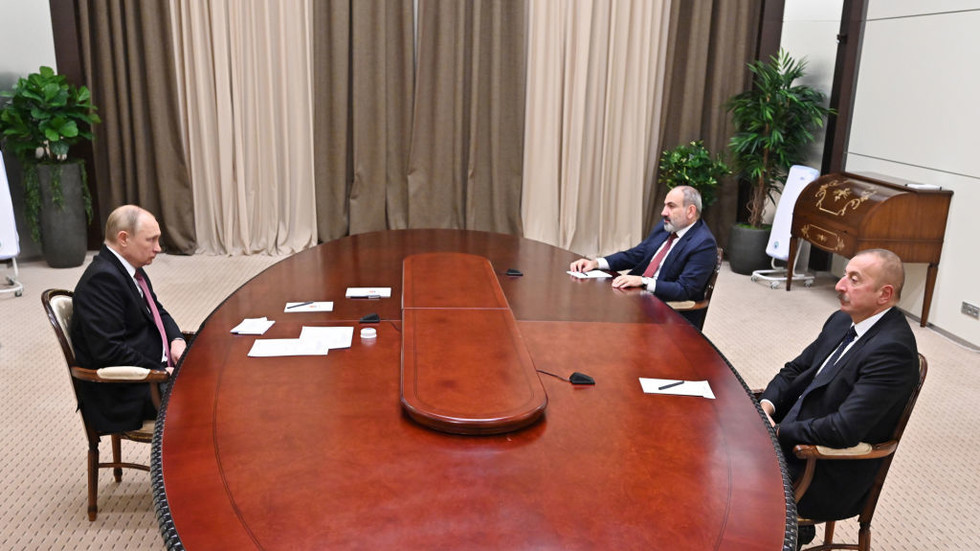 Putin invites leaders of Armenia and Azerbaijan for talks

FOTCM Member
Here's what I see:

Tukey: is mute (on this issue), while consolidating power and infrastructure.

Azerbaijan: has a close military relationship with Israel. Israel has an airbase in Azerbaijan and trains the Azerbaijanis militarily. Azerbaijan supplies 40% of Israeli oil though it's pipeline.

The European union: has "somehow" talked the Armenians into letting them "observe" in order to "help" on the Armenian side of the border for 2 months.

Iran: is massing military on the Azerbaijani border (where the Israeli base is) because they are not comfortable with the Europeans being in Armenia.

(Israel and Iran are "not friends" just like Armenia and Azerbaijan are not friends.)