FOTCM Member
About a week ago over Amur region, Russia there have been seen in the sky a possible asteroid while entering the atmosphere and disintegrating in a spectacular way:

Andrian said:
About a week ago over Amur region, Russia there have been seen in the sky a possible asteroid while entering the atmosphere and disintegrating in a spectacular way:

It's not coming down. It's going up. It's a rocket launched from the nearby Vostochny Cosmodrome.

It's not coming down. It's going up. It's a rocket launched from the nearby Vostochny Cosmodrome.
Click to expand...

Thank you treesparow, my bad, will be more careful next time.

cneos.jpl.nasa.gov
"The following chart shows the cumulative number of known Near-Earth Asteroids (NEAs) versus time".
"Totals are shown for NEAs of all sizes, those NEAs larger than ~140m in size, and those larger than ~1km in size".

https://twitter.com/i/web/status/1435874201253171204
DAYTIME BOLID OVER THE CANARY ISLANDS #SPMN090921 registered at 6h30m18s TUC. Detected by Ramón López
@StargazerLZT (from behind in this video-peephole) from Playa Blanca, Yaiza,#Lanzarote . Given its characteristics, speed and fragmentation, this fireball did not produce meteorites
Line-2
2) Many records of daytime racing cars are like that and end there, but Ramón López has installed a pioneer station in the #IslasCanarias that the car offers us from multiple perspectives. Here with another camera skimming the southern horizon@OOCC_IAC@aaecastro
@GTCtelescope

"The following chart shows reported fireball events for which geographic location data are provided. Each event's calculated total impact energy is indicated by its relative size and by a color. Hover over an event to see its details".

"In 2019 it was determined that the Geostationary Lightning Mapper (GLM) instruments on GOES weather satellites can detect fireballs and bolides. The GLM Bolides website provides the data for those detection's".

FOTCM Member
A newly-discovered asteroid made a close approach to Earth on September 8, 2021.

Asteroid 2021 RS2 flew past Earth at an exceptionally close distance of 0.06 LD

A bright fireball streaked through the night sky over the Ciudad Real, Spain. A Spanish meteor-tracking network has developed new software that can track the increasing amount of falling rocket debris raining on Earth.

Using the European Southern Observatory’s Very Large Telescope (ESO’s VLT), a team of astronomers have obtained the sharpest and most detailed images yet of the asteroid Kleopatra. The observations have allowed the team to constrain the 3D shape and mass of this peculiar asteroid, which...

Using the European Southern Observatory’s Very Large Telescope (ESO’s VLT), a team of astronomers have obtained the sharpest and most detailed images yet of the asteroid Kleopatra. The observations have allowed the team to constrain the 3D shape and mass of this peculiar asteroid, which resembles a dog bone, to a higher accuracy than ever before. Their research provides clues as to how this asteroid and the two moons that orbit it formed.

“Kleopatra is truly a unique body in our Solar System,” says Franck Marchis, an astronomer at the SETI Institute in Mountain View, USA and at the Laboratoire d'Astrophysique de Marseille, France, who led a study on the asteroid — which has moons and an unusual shape — published today in Astronomy & Astrophysics. “Science makes a lot of progress thanks to the study of weird outliers. I think Kleopatra is one of those and understanding this complex, multiple asteroid system can help us learn more about our Solar System.”

Kleopatra orbits the Sun in the Asteroid Belt between Mars and Jupiter. Astronomers have called it a “dog-bone asteroid” ever since radar observations around 20 years ago revealed it has two lobes connected by a thick “neck”. In 2008, Marchis and his colleagues discovered that Kleopatra is orbited by two moons, named AlexHelios and CleoSelene, after the Egyptian queen’s children.

To find out more about Kleopatra, Marchis and his team used snapshots of the asteroid taken at different times between 2017 and 2019 with the Spectro-Polarimetric High-contrast Exoplanet REsearch (SPHERE) instrument on ESO’s VLT. As the asteroid was rotating, they were able to view it from different angles and to create the most accurate 3D models of its shape to date. They constrained the asteroid’s dog-bone shape and its volume, finding one of the lobes to be larger than the other, and determined the length of the asteroid to be about 270 kilometres or about half the length of the English Channel.

In a second study, also published in Astronomy & Astrophysics and led by Miroslav Brož of Charles University in Prague, Czech Republic, the team reported how they used the SPHERE observations to find the correct orbits of Kleopatra’s two moons. Previous studies had estimated the orbits, but the new observations with ESO’s VLT showed that the moons were not where the older data predicted them to be.

“This had to be resolved,” says Brož. “Because if the moons’ orbits were wrong, everything was wrong, including the mass of Kleopatra.” Thanks to the new observations and sophisticated modelling, the team managed to precisely describe how Kleopatra’s gravity influences the moons’ movements and to determine the complex orbits of AlexHelios and CleoSelene. This allowed them to calculate the asteroid’s mass, finding it to be 35% lower than previous estimates.

Combining the new estimates for volume and mass, astronomers were able to calculate a new value for the density of the asteroid, which, at less than half the density of iron, turned out to be lower than previously thought [1]. The low density of Kleopatra, which is believed to have a metallic composition, suggests that it has a porous structure and could be little more than a “pile of rubble”. This means it likely formed when material reaccumulated following a giant impact.

Kleopatra’s rubble-pile structure and the way it rotates also give indications as to how its two moons could have formed. The asteroid rotates almost at a critical speed, the speed above which it would start to fall apart, and even small impacts may lift pebbles off its surface. Marchis and his team believe that those pebbles could subsequently have formed AlexHelios and CleoSelene, meaning that Kleopatra has truly birthed its own moons.

The new images of Kleopatra and the insights they provide are only possible thanks to one of the advanced adaptive optics systems in use on ESO’s VLT, which is located in the Atacama Desert in Chile. Adaptive optics help to correct for distortions caused by the Earth’s atmosphere which cause objects to appear blurred — the same effect that causes stars viewed from Earth to twinkle. Thanks to such corrections, SPHERE was able to image Kleopatra — located 200 million kilometres away from Earth at its closest — even though its apparent size on the sky is equivalent to that of a golf ball about 40 kilometres away.

ESO’s upcoming Extremely Large Telescope (ELT), with its advanced adaptive optics systems, will be ideal for imaging distant asteroids such as Kleopatra. “I can’t wait to point the ELT at Kleopatra, to see if there are more moons and refine their orbits to detect small changes,” adds Marchis.

FOTCM Member
A newly-discovered asteroid will fly by Earth on September 12, 2021.

Bright fireball captured streaking in the sky above Morocco.

FOTCM Member
https://twitter.com/i/web/status/1436592595615068167
461 new trans-Neptunian objects discovered ... and there are already 815. The huge region we call the Kuiper Belt, which goes beyond the orbit of Neptune, is inhabited by thousands of objects of all sizes. Pluto is the most famous in the family.

Andrian said:
About a week ago over Amur region, Russia there have been seen in the sky a possible asteroid while entering the atmosphere and disintegrating in a spectacular way:

Well, that was certainly bizarre! Never saw anything remotely like that!

And I don't know that I would accept that it was a rocket launch. That's a facile way to dismiss weird stuff.

Laura said:
Well, that was certainly bizarre! Never saw anything remotely like that!

And I don't know that I would accept that it was a rocket launch. That's a facile way to dismiss weird stuff.
Click to expand...

It looks a lot like the ones released by space X and others, I remember a few years ago, they uploaded several videos in Norway.
From the speed it does not appear to be a asteroid, that look too slow. Even the height seems to be too low.

This is the most bizarre thing for me - a supposedly failed rocket launch: 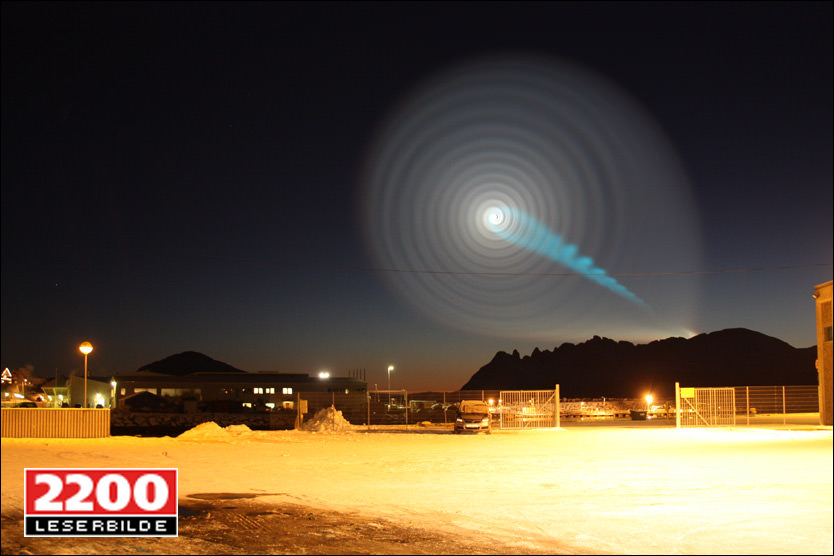 Apparently, this is not a Photoshopped image, as there are several more just like it, taken from various locations. This morning in northern Norway, people saw a strange light in the sky which shocked residents and so far, the phenomenon has yet to be explained. This picture was taken from a pier, looking to the east, approximately at 07.50 am local time. “I can imagine that it went on for two, three minutes,” said the photographer Jan Petter Jørgensen. “It was unbelievable. I was quite shaken when I saw it.”
Click to expand...

A spectacular spiral light show in the sky above Norway Wednesday was caused by a Russian missile that failed just after launch, according to Russia's defense ministry.

When the rocket motor spun out of control, it likely created the heavenly spiral of white light near where the missile was launched from a submarine in the White Sea. The Russian defense ministry confirmed to the Itar-Tassnews agency that a Bulava ballistic missile test had failed.
Click to expand...

FOTCM Member
And another video.

FOTCM Member
By looking at the above videos and pictures one thing is certain for me at least, that the layers of the atmosphere and the atmosphere herself has undergone some pretty serious changes, the said changes along with other factors of course will certainly influence further the increasing of the earth changes.

And probably we will witness the said changes in the not too distant future, 6-12 months perhaps? Considering the current chaos that is spreading in every branch of society across the globe.