Laura and Andromeda at the board

Q: (L) Today is 15 August 2020. The usual suspects are here. [Review of those present] Artemis is indisposed.

A: Hello. Quinnilln of Cassiopaea here to serve tonight.

Q: (L) Which question should we start with? Let's ask about these horse mutilations in France. The article says: 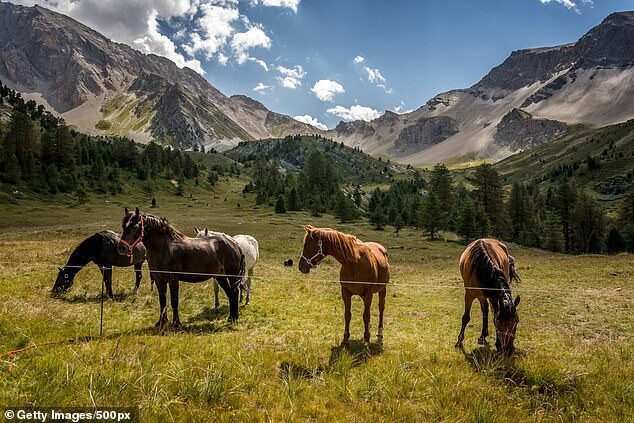 French police are investigating a spate of killings of horses involving mutilation of the animals' bodies. The latest in Cortambert, a village in the Saone-et-Loire region, occurred overnight on Friday. The horse's right ear was cut off, one of...

French police are investigating a spate of killings of horses involving mutilation of the animals' bodies.

The latest in Cortambert, a village in the Saone-et-Loire region, occurred overnight on Friday.

The horse's right ear was cut off, one of its eyes was gouged out and its genitals had been cut away. "This is absolutely barbaric," a local official said.

A Paris police spokeswoman said there had been about 10 similar cases across France since the start of the year, most in the north and many taking place in secluded meadows.

She said there were also cases between 2014 and 2016 and that similar killings and mutilations of horses had been reported in the past in Belgium and Germany.

But the high number in France was unprecedented over such a short period. [...]

She said all types of horses had fallen victim, as well as one donkey, and that mutilation of an ear was a common factor. No meat had been taken from the carcasses.

A: Satanists are widely active in these times.

Q: (L) so you're saying this is the work of some kind of Satanic cult?

Q: (L) And it's not like cattle mutilations done by aliens?

Q: (L) Alright then. Next question: Was the Beirut explosion an accident?

Q: (L) Is there any connection to other fires and explosions in the Middle East within a few days of that event?

A: Yes, all connected in terrorism of populations.

Q: (Joe) So how did the ammonium nitrate explode in the hangar in the port of Beirut? How was it detonated? Well... What was the cause of the explosion?

(L) Why are people protesting in Belarus?

Q: (Andromeda) So the next question was... (L) Was it foreign interference?

Q: (L) Which is basically what a color revolution is...

(L) Is Poroshenko planning a coup for this month? Who heard that?

A: Safe enough. Safer than what Gates is planning.

Q: (L) Is it effective against corona or corona-type viruses?

A: Not much will be as it constantly mutates.

(L) Is there going to be a 2nd wave with more lockdowns?

A: They will create the illusion.

(L) Now one thing that's really been bugging me is this thing about masks. For years, they put all this money and effort into creating facial recognition software. They put cameras everywhere. Now all of a sudden they're putting masks on everybody which makes facial recognition software just completely obsolete - after all that money and time and effort! So, what's the real deal with the masks?

A: Facial recognition was never the full plan as it can be easily thwarted. It was used to accustom populace to tracking and surveillance. The ultimate surveillance is chipping. The fake pandemic justifies the vaccine with chip and wider tracking mandate. The mask is similar to antismoking. It induces obedience and allows identification of dissidence. Masks have the additional advantage of inducing brain damage and lowering of intelligence and general health.

(L) Lemme ask: Is the brain damage from low oxygen causing the death of neurons?

Q: (L) And the lowering of health is because of the accumulation of viral and other pathogen loads in the masks themselves?

Q: (Gaby) Could they also reactivate latent or stealth infections?

Q: (Andromeda) There's nothing good about them.

(Joe) So, are they planning to surreptitiously chip people with the vaccine without telling them?

Q: (Chu) And it means that 100% or most of the medical staff will be pretty sick and retarded if there was a REAL pandemic.

(Joe) That's why doctors are so stupid. They wear masks all the time. No offense, Gaby! You're an exception.

(L) I have started this thread "Using Books to Imagine a New Reality" (Using Books to Imagine a New Reality) about my reading materials. I hesitated to even bring it up because it's something that can so easily be misunderstood - and apparently it WAS misunderstood almost immediately by some people. However, I have speculated a little bit on the thread about the effects of reading particular literature. Am I on the right track with this?

Q: (L) Okay. Is there anything you would suggest further about this thread?

A: The books you suggest ought to be priority.

Q: (L) Any other questions about that topic? I mean, I've read bunches of them and there's a lot of them that I would not recommend or suggest to anybody.

(Andromeda) Yeah, it's not just any book in that category.

(L) Some are just not appropriate. But there are some that have a specific dynamic and plot line and so forth. I finished one today that's absolutely EXCELLENT! Absolutely excellent. It's called, "Dancing with Clara". Well, it's just a really interesting book.

(Andromeda) I want the synopsis later!

(L) And Joe has questions about my new book?

(L) Okay Honey, you have to come up close so I can hear your questions.

(Ark) It's my time already?

(Joe) Niall wants to ask about Belarus if you want to keep it on topic.

(Niall) Did they start this color revolution against Lukashenko because of his stance on the pandemic?

A: Yes and related resistance to domination.

Q: (Joe) Just a quick question about Beirut... Was it an incendiary device that set off the ammonium nitrate?

Q: (Joe) What are the odds of Trump winning the US election?

(Ark) But my questions are other worldly...

(Andromeda) That's why we had to get the other ones out of the way first.

(Ark) So the first question is about the idea of multiverse. There is such a thing that is called multiverse. It's supposed to be like a soup that is boiling, and that produces bubbles. These bubbles are universes. Some bubbles are small and they die very soon, and some bubbles are big and have enough energy and organization like our universe. We are one of the big bubbles. Is it an approximately correct idea?

A: Based on Darwinism.

(Ark) This eliminates a number of planned questions. [laughter] Alright... Like a year ago...

A: Consciousness and information are foundational. There is no place for either in "boiling" and random emergence.

Q: (Ark) Yeah, alright. Now I want to ask: A year or two ago there was a Nobel Prize given for the detection of a gravitational wave. Since then, most of the people accept it, but there are some dissidents that call it a big fraud...

Q: (Ark) Oh, okay. Now, one of the guys who called it a big fraud is my old kind of friend by the name of Dimi Chakalov.

(Ark) We were discussing things years ago. Now, he is of course he doesn't spare words, calling it a fraud and blah blah blah. He gives arguments. But on the other hand, recently I downloaded a bunch of his recent papers. He is working on his idea of a platonic world. His platonic world is where all these ideas are being formed. Should I really study his ideas because he's onto something? Can I gain something from studying his crazy papers?

A: Briefly and selectively.

Q: (Ark) That was about Dimi. Last question: I would like to know if there is some most important law that governs all of the creation. We know conservation of energy is an important law. You can think about conservation of information. Maybe there is such a law? This John Archibald Wheeler who we quoted several times, he added his own law which is kind of timeless which says that it's pure geometric boundary which says boundary is zero. Another possible law is: As above, so below. Okay. Is there any kind of a fundamental physical law? Well, not physical... Some fundamental law of creation?

(L) I didn't understand that.

(Joe) His question is does all information already exist, or is new information created and added by individuals through their experiences?

(Pierre) Would you say then that the information field contains already ALL possible information?

(Joe) I just thought of one question about your book. I was wondering if Paul ever explicitly spoke about Caesar at the time?

Q: (Pierre) Or maybe only to initiates.

(Joe) But Mark never did that, right?

(L) I think Mark embedded it in the story: the dove, symbol of Venus at the baptism... There are plenty of allusions to it. What he was doing was he was amalgamating Paul's theology with the Jewish messiah who was basically a radical zealot.

(L) What happened with the two explosions on the Kursk submarine twenty years ago?

Ambassador
FOTCM Member
Thank you for another interesting session. Things will get even hotter in this reality.

FOTCM Member
Thank you for sharing this new session with us, Laura & Chateau Crew!

So no tactical nuclear sabotage in the Beirut scenario...

Texas is having horse killers as well:
Officials Warn of Possible Serial Horse Killer in Texas After 5 Found Butchered

Moderator
FOTCM Member
Thank you, all, for this new session. Informative as always.

FOTCM Member
Many thanks to Laura and the Chateaux crew for another interesting session. The explanation regarding the masks coincides with what I am seeing, people driving alone with them on and a strange look in their eyes. No wonder I have such an aversion to them. I only wear one for minutes when I must go into the store, order most meat frozen and delivered from a couple of farms. Oh, chipping or vaccine, will figure out a way not to get those, have a little time to reflect and plan accordingly. It seems on top of the usual suspects sabotaging those that don’t follow orders this craziness now includes Satanic Cults! Will have to get busy and order/read some of the romance novels that Laura recommended! Thanks again to all!

Laura said:
Q: (Joe) Just a quick question about Beirut... Was it an incendiary device that set off the ammonium nitrate?

I thought ammonium nitrate had to be soaked with fuel oil in order to get it to explode. It burns slowly with out some sort of combustible excellent.

I was hoping for a failed attempt rather than a sure thing.
Thanks of another informative session.

Thank you Quinnilln of Cassiopaea.

I've been thinking for a long time what I'm going to say and ...

FOTCM Member
Thank you for this!

Poor horses. I do hope those responsible will get their just deserts.

Does anyone else get a tingly feeling before a session?
Still much to ponder regarding the impending vaccines and chipping.

Moderator
FOTCM Member
Thanks for sharing the session.

Q: (Joe) What are the odds of Trump winning the US election?

One can only hope. Things will still be crazy as hell with Trump but I shudder to think of life under Pervy Uncle Joe and that crooked cop.

Moderator
FOTCM Member
Thanks for sharing the session.

FOTCM Member
Many thanks for this new Session. Deep breath! .....

FOTCM Member
Thanks for the new session and take care of each other.