Goyacobol is accurate on both accounts. My estimation for everyone involved in the work (not just Laura) should be evident from what I've expressed across this forum. This esteem extends to you and my other fellow warriors on the path of knowledge. My intent isn't to be condescending, but maybe my writing style falls differently on different eyes.

@goyacobol, thanks for taking the time to respond. Both references reflect what I was thinking/feeling when I posted.
Click to expand...

I suspected you had no intention of condescension from reading some of your previous posts. Thanks @GqSoul , I am glad you have made it more clear.

My @nicklebleu spelling was wrong so maybe this time I can correct my poor spelling.

Administrator
Moderator
FOTCM Member
For those of you who have asked to see our morning routine, here it is:


You are allowed to laugh at our lack of coordination and bloopers.

Let us know how it goes for you if you try it out!

You can follow along by playing the whole video, or, once you've learned the exercises, just make your own routine.

FOTCM Member
Thank you very much for posting this, Chu! So, now there are no more excuses for me for not doing it - time to obtain a yoga mat & get myself practicing along with you!

FOTCM Member
Started watching and was immediately captured by the music. I closed my eyes and listened to the full video, then watched again to see what can be done with a bit of effort Can't imagine what I'll be like on a windy day but it beats going to the gym.

Many thanks for giving your time yet again. As special thanks must go to the extras!!!!!!

Administrator
Moderator
FOTCM Member
Follow this tread of updates on the routine and experiences being shared.


Tuatha de Danaan said:
Can't imagine what I'll be like on a windy day but it beats going to the gym.
Click to expand...

You may come up with a new posture or something!

FOTCM Member
Thank you for posting the video. The routine covers pretty much everything (stretching, strength, balance/grounding) one can do in 30 minutes. I really like it.
I was just thinking this morning while doing it that maybe one element could be added to release some of the tension that some might feel in the shoulders towards the end. Something like the cat and cow pose towards the end before the balancing part?
Thank you for putting this all together!

Now that's what we call a Super- Duper work out.You all executed the different perform routine very well on this video. The bar has certainly been raised for many of us to follow. We are extremely grateful to you all, a little goes a long way (energy,balance strength).

maiko said:
Thank you for posting the video. The routine covers pretty much everything (stretching, strength, balance/grounding)...maybe one element could be added to release some of the tension that some might feel in the shoulders towards the end. Something like the cat and cow pose towards the end before the balancing part?
Click to expand...

Thank you for sharing Chu,

Unfortunately I found myself drifting between focussing on the narrators beautiful voice and Ark’s Batman’s shirt first time round...

FOTCM Member
Thank you! I will do this routine with you via my computer.

I will be stimulated to do it and feel near you during the exercises. The music is very nice!
.

FOTCM Member
And the dogs are marvelous....

Chu said:
For those of you who have asked to see our morning routine, here it is:


You are allowed to laugh at our lack of coordination and bloopers.

Let us know how it goes for you if you try it out!

You can follow along by playing the whole video, or, once you've learned the exercises, just make your own routine.
Click to expand...

Thank you, Chu for the video. I admire the attendance of the team! It is inspiring.
What a job it is!
I'm certainly going to have a try and let you know how I feel.

And thanks to the team for this great session as always. Some amazing things are happening those times and I am grateful for the list of behavior and thinking made by Laura.

About the TWIN CAPS: As a side note, there's a Spanish TV series names IF I NEVER MET YOU (english version NETFLIX) season 1 - episode 5 The Kiss (...) SI JE NE T'AVAIS JAMAIS RENCONTRÉE (in french.) which is about time travel and parallel universes, where one of the characters brings back an item from the past (Plastic marriage couple atop the wedding cake), and the one she had in her current/ present reality is there also.

2 of the same objects. It makes one wonder: if as in the series one of the crew has not traveled back or forward in time, as in Ark, since it is his cap(s)? Truly: it is similar to the event in this session.

It is a pretty good series all in all, up to episode 5 anyhow... Until this session, I had thought that it would be impossible for 2 of the same objects to co-exist simultaneously. In the series a character can also co-exist with themselves in another reality. Now that makes me really wonder if that has not happened in our lifetimes, that we came outwardly back to help ourselves or change timelines. By that I mean that we could be physically HERE NOW FROM THE FUTURE together, our future self and our present self. As we know it is possible in an invisible way, but is it also possible to co-exist as 2 selves simultaneously? Or does the reality of the 2 caps prove that?! Could I be disguised as my own neighbor? Now that is the question for me??? Thank you for this session which every time I read it yields more information, like a program that slowly unravels...

The more I thought about this recently, and shared the idea with my partner, we are both of the impression (??) that possibly also, others would see our OTHER self but that we might not see it? (Contrary to what is shown in the TV series?)
Last edited: Jul 26, 2019 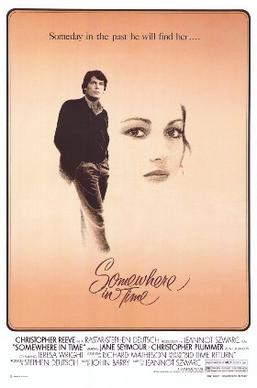 en.wikipedia.org
. Where in the beginning of the film an elderly lady gives the main actor played by Christophe Reeve a beautiful gold pocket watch. He then goes back in time to when the woman was younger who was played by Jane Seymour. They soon fall in love and he gives her the watch that she gave him but suddenly realizes that he is in the wrong time and quickly returning to his present time. She was holding the watch when he went back to present time so the question, I ask everyone that watches the movie, “where did the watch come from?” Since when he returns to present time he no longer had the watch and she now has the watch that she originally gave him.
M

***
Hello,
This comet is related to forum members and administrators.

I personally consider it unacceptable to be in the forum "Cassiopeia Experiment"
post comments on topics that are not touched in the session, the rules of all
The forums are clear that it does not get out of the box of the given topic.

I also see reading sessions to turn this forum into a polygon of illness
Islamic propaganda, I also see that none of the administrations reacted.
In another topic, I complain that I do not respect the members of the forum, so I apologize
I tried to respect and turned out to be the opposite.

On each normal forum, the members of the forum indicate that it is matter for someone else
forum, here is ,,Mandrak,, , the world of cows, can write what he wants, to lie lazily
to postpone the Muslim-American war propaganda and 25 years after the war in BiH.

The quotes in the quote are so nebulous that the person who reads them gets the urge to ...
All topics and forum "History" are the answers to the posts of your member "Mandrak", in which they are It does not spread lies and fabrications, but argued evidence that what he says is not true.
Anyone better informed about this problem knows that one fake is created and posted on a forum
in 10 minutes, and to prepare and set up arguments that overrun the claims of the one who spreads lies, It takes one day.

The Lord instead of dealing with the issues posed by the theme of the session,
You allow Islamists to post their sick propaganda in topics that are very much
serious and important for forum members.

Your holy cow, ,,Mandrak,, , can write what he wants in this topic and in the one that is made
because of this, I will not receive any response from me in any place, with the Islamists normal
and argumentative discussion is not possible.

,,...The Ottoman empire occupied Serbia, but allowed Orthodox Christianity to continue expanding towards Bosnia over Catholics and the Vlachs. Only they could not convert the Muslims. There are documents where Catholics seek protection from Sultan against conversion to Orthodox Christianity.
On the other hand, after the retreat of the Ottoman Empire, Orthodox Christians began to kill Muslims and force them to convert to Christianity. Some Muslims have committed suicide rather than being converted. Some chose to become Gypsies because they could keep Islam then. They are now the only white Gypsies . Conversion is sometimes followed by forcing to eat pork. ,,

In the "History" forum, I have opened a topic that contains arguments to quote from the quote
fall into a sick Islamic propaganda.

The author of the answer in the article on this subject is Muslim, Salih Selimovic, Professor Historian.

Link to topic in the forum ,, History,,

Residents of Bosnia before the Turkish occupation

(En) The text set is a translation from Serbian into English (Sr) Postavljeni tekst je prevod sa srpskog jezika na engleski *** (En) Residents of Bosnia before the Turkish occupation An excerpt from the text in the link...