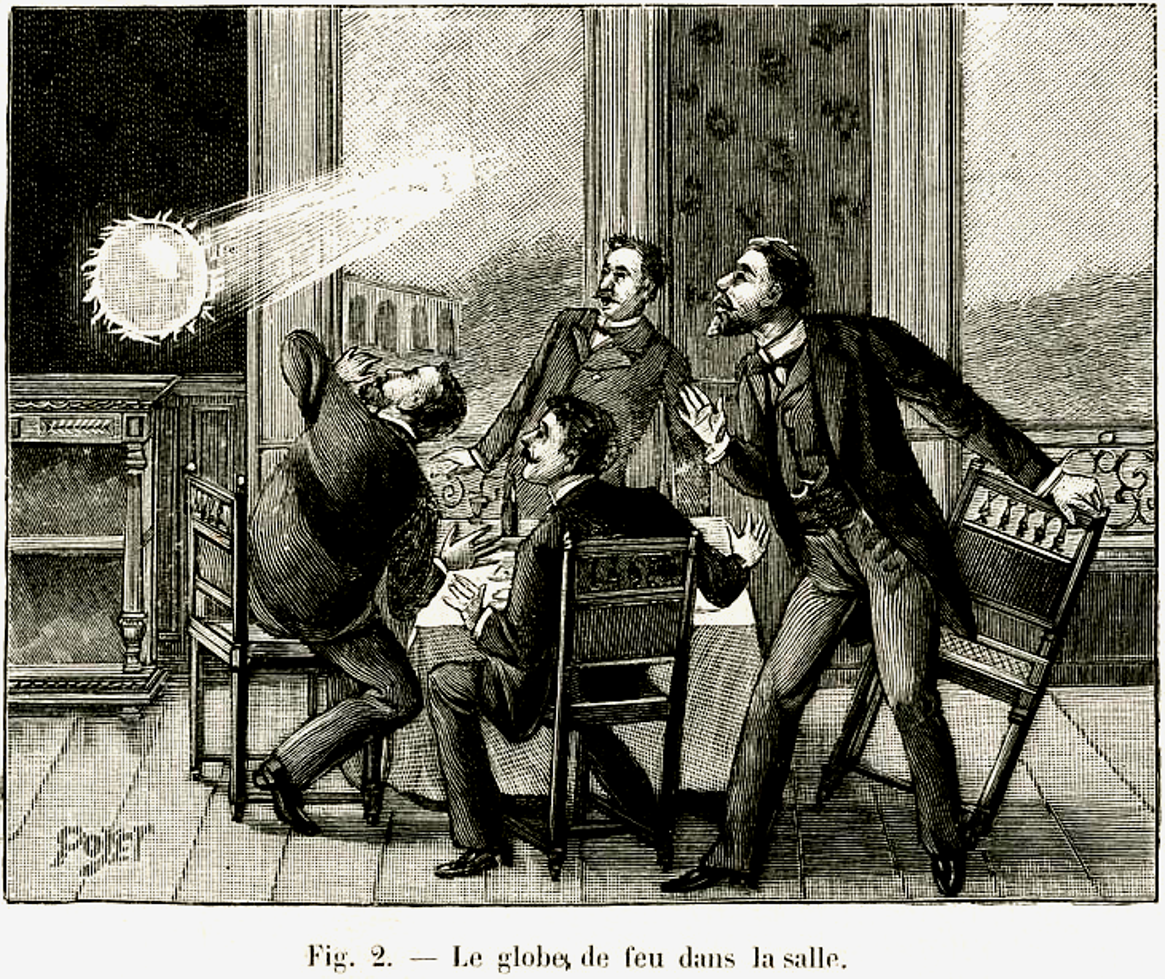 It seems that it is not real, at least not entirely.

I found the Tweet, opened the comment session and found that it has been mentioned in the History Channel
The Proof Is Out There: Unexplained Lightning Phenomenon Caught On Camera (Season 1) | History
There is also an interview with the person who claimed to have recorded it. I looked up his name on YouTube and found:
Ball lightning near railway tracks [CGI]Below there is a description in Russian which translated goes like:

Once, during a thunderstorm, I was walking along the tracks, and then, suddenly, I heard a crash. I turned and saw a blue-purple sphere "floating" out from behind the embankment.
Click to expand...

[CGI] is explained in a Wiki as:

Computer-generated imagery (CGI) is the application of computer graphics to create or contribute to images in art, printed media, video games, simulators, computer animation and VFX in films, television programs, shorts, commercials, and videos. The images may be dynamic or static, and may be two-dimensional (2D), although the term "CGI" is most commonly used to refer to the 3-D computer graphics used for creating characters, scenes and special effects in films and television, which is described as "CGI animation".
Click to expand...

So how much is real and how much is CGI? Here is the transcription from the History Channel clip, who went to interview Andrei Trukhonovets:

00:00
you know for centuries people have reported seeing mysterious balls of electricity
00:05
hovering in the air so where do these anomalies come from and what do they
00:09
mean it's may 2019 near minsk belarus a man named andre trichonovitz posts a bizarre video
00:18
watch let's rewind that back
00:34
what is that bright blue sphere
00:39
and how can it travel across the railroad tracks throwing off sparks as it moves
00:45
the internet's reaction blew andre's mind it has almost 2 million viewers at this moment
00:55
some commenters guessed that andre has recorded a rare phenomenon known as ball lightning
01:01
strange luminescent balls in the air that eyewitnesses have been reporting since the 1600s
01:06
some 19th century accounts claimed they smelled of sulfur and considered them the work of the devil
01:14
more recently there was this sighting near a field in novosibirsk russia this image
01:20
resembles a phenomenon reported back in world war ii odd zigzagging balls of light in the sky
01:26
allied fighter pilots dubbed them foo fighters and it was really kind of universally believed
01:34
amongst the allies that this was likely some type of advanced nazi technology but
01:41
interestingly enough when you look at the luf wafa so the german air force they were seeing them too
01:49
to this day some scientists argue that ball lightning doesn't exist
01:54
based on how rarely it seemed so is that what we're seeing here to kick off our analysis we
01:59
went back to our forensic video analyst michael primo primo begins by breaking down andre's video
02:10
focusing not on the images but the sounds i noted that the sounds were up front and didn't sound
02:17
natural with being in the outdoors sounds like something that was added
02:28
he concludes that the belarus video has been edited
02:34
yet he says the other example from russia has not been
02:39
so could it be an example of the famous foo fighters macmillan says the ball of light
02:44
looks similar but behaves differently what's been called a foo fighter lasted for a great
02:52
deal time and engaged in a lot of maneuvers and stuff that you just don't see there
02:56
so could it instead be a natural weather phenomenon atmospheric scientist dr deanna
03:02
hence traced the weather conditions in russia at the time of the sighting if you're going to get
03:06
ball lightning lightning also has to be generally a likelihood and i'm not seeing a lot of evidence
03:10
of either it does kind of reduce the likelihood that that is a possibility however hands concedes
03:20
that so little is known about ball lightning that it's hard to rule out it is a very poorly
03:26
understood phenomenon and because it's difficult to capture it's also very very difficult to study
03:31
so the russian video might be a genuine example but when we talk to andre toward the end of our
03:37
investigation he admits he created the dazzling effect in his video with cgi i processed the video
03:46
on my computer with a specialized software though he never thought it would go viral
03:57
so our verdict the belarus video is clearly doctored
04:02
please that sound design was a dead giveaway as far as the other footage
04:06
we're gonna say it might be genuine ball lightning but what causes bald lightning remains a mystery
04:12
a good reminder to remain as humble as we are curious in the face of the
04:15
unknown
Click to expand...

It seems it is not real, but in spite of being doctored, is it based on real observations? But then he is a graphic artist.

In the History Channel clip there is a clip from Russia, that is more difficult to explain. This second example is included in a Russian clip uploaded in 2017 from a Russian news report about ball lightning: Шаровая молния 18.08.2016 they have several examples, among which I am doubtful of the one in a suburban area, that moves back and forth. The occasion for the report was that a ball lightning had caused harm to a dog and a couple of children. Here is a translation, deepL.com, of the transcript:

Does ball lightning appear more frequently in some places?

Above there was also mention of the Tunguska meteorite, but is there a real cause-effect relationship or is it a myth?

thorbiorn said:
It seems it is not real, but in spite of being doctored, is it based on real observations? But then he is a graphic artist.
Click to expand...

This is a CV for graphics artists. Such videos if look real, they are a great entry ticket to high paying jobs in the industry. Most CGI developers, PR studios - subcontractors who do special effects for TV and movie ads - definitely watch these as the artist makes sure to post such videos in the right places. Like Houdini, you get famous, you get hired. The ultimate goal is Hollywood as there is the most money. Get into a studio (Vietnam, Taiwan, Thailand, Eastern EU, where CGI-slaves are cheap) that does a lot of grunt / slave work on Hollywood movie special effects and you are set for life. High stress, but highest pay.
You must log in or register to reply here.
Share:
Facebook Twitter Reddit Pinterest Tumblr WhatsApp Email Share Link
Top Bottom