Mytja said:
According to Kepler’s 2nd law of planetary motion,
Click to expand...

Which led me to recall, that the Moon and the Earth move around a barycenter, so would Kepler's law apply to this center, more than to the geographic center of the Earth? Leaving the question aside, here is what they write about the barycenter:

In astronomy, the barycenter (or barycentre; from Ancient Greek βαρύς (barús) 'heavy', and κέντρον (kéntron) 'center')[1] is the center of mass of two or more bodies that orbit one another and is the point about which the bodies orbit. A barycenter is a dynamical point, not a physical object. It is an important concept in fields such as astronomy and astrophysics. The distance from a body's center of mass to the barycenter can be calculated as a two-body problem.

If one of the two orbiting bodies is much more massive than the other and the bodies are relatively close to one another, the barycenter will typically be located within the more massive object. In this case, rather than the two bodies appearing to orbit a point between them, the less massive body will appear to orbit about the more massive body, while the more massive, body might be observed to wobble slightly. This is the case for the Earth–Moon system, whose barycenter is located on average 4,671 km (2,902 mi) from Earth's center, which is 75% of Earth's radius of 6,378 km (3,963 mi).
Click to expand...

For an animation of how the Earth-Moon movement can be conceived with the barycenter of the system as the important location, there is this Tweet, otherwise the Wiki has an illustration:

Our solar system’s barycenter constantly changes position. Its position depends on where the planets are in their orbits. The solar system's barycenter can range from being near the center of the sun to being outside the surface of the sun. As the sun orbits this moving barycenter, it wobbles around.
Click to expand...

Astronomers have decided to define a Barycentric Dynamical Time:

Barycentric Dynamical Time (TDB, from the French Temps Dynamique Barycentrique) is a relativistic coordinate time scale, intended for astronomical use as a time standard to take account of time dilation[1] when calculating orbits and astronomical ephemerides of planets, asteroids, comets and interplanetary spacecraft in the Solar System. TDB is now (since 2006) defined as a linear scaling of Barycentric Coordinate Time (TCB). A feature that distinguishes TDB from TCB is that TDB, when observed from the Earth's surface, has a difference from Terrestrial Time (TT) that is about as small as can be practically arranged with consistent definition: the differences are mainly periodic,[2] and overall will remain at less than 2 milliseconds for several millennia.[3]
Click to expand...

From the 17th century to the late 19th century, planetary ephemerides were calculated using time scales based on the Earth's rotation: usually the mean solar time of one of the principal observatories, such as Paris or Greenwich. After 1884, mean solar time at Greenwich became a standard, later named Universal Time (UT). But in the later 19th and early 20th centuries, with the increasing precision of astronomical measurements, it began to be suspected, and was eventually established, that the rotation of the Earth (i.e. the length of the day) showed irregularities on short time scales, and was slowing down on longer time scales. Ephemeris time was consequently developed as a standard that was free from the irregularities of Earth rotation, by defining the time "as the independent variable of the equations of celestial mechanics", and it was at first measured astronomically, relying on the existing gravitational theories of the motions of the Earth about the Sun and of the Moon about the Earth.
Click to expand...

The differences are small, but it may give an idea of how complicated it is to measure the length of a day,

The diagrams in the last post were from TimeAndDate.com, and here are some more data:
On this page: How Long Is a Day on Earth?, they will tell us how much off the current day is.

While diagrams showing the variations are helpful for an overview, the numbers reveal the magnitude of the differences more clearly and show the date of the shortest and longest day for a period of about 50 years:

The variations in the length of day are difficult to explain. One will need a lot of mathematics and physics to explain the variations, more so since there are not only the shortest and the longest day. Within one year, there are variations with minor ups and downs. It is far from a straight line.
M

January 2nd as the shortest day of 1973 is an error (not the only one in DateAndTime's list), shortest day of that year was August 9th (check in the plots below), while year 2023 is still in the open so to say, which brings the question "How do they on DateAndTime predict their values in advance"?

Leaving those guys aside, IERS data can be found and checked on Index of /eoppc/eop/eopc04, where also the list containing LOD values from 1962 til mid November 2022 is located (which is used for that wiki plot). From those numbers we get a similar plot (yellowish line are the yearly means (average day duration in a year), centered at the middle of the respective year):

It's similar to plot in SAO's post, from where the plot below of Sun's activity (solar sunspots cycles) was borrowed:

It seems there's a correlation between Sun's (electro)magnetic activity and the duration of the day (LOD) on Earth, at least it's apparent that the days are getting shorter while Sun's going asleep in the roughly same period.

That brings us back to discussing shortest and longest days and when they occurred within a year.
Here's monthly distribution of their occurrences:

To have a better look at the issue, the plot above is split into 11 years overlapping intervals:

Not only that days at the end and beginning of the calendar years were not among the longest days in a year, but except for few years, in that period of the year we notice drop in day lengths! It seems there's something else at play there, which effects on day duration are apparently more pronounced than those that come from Kepler's law (and gravitation).

Potential explanation, which on the other hand opens a whole new can of other questions, might be found in an old article from early 1920s: https://articles.adsabs.harvard.edu/pdf/1921PA.....29..325H, where we see that Earth on its way around the Sun passes the plane of Sun's rotation in June (ascending node) and December (descending node), while in March and September is furthest on the South and North from the Sun's equator.

The fact that the axis of Sun's rotation is inclined to ecliptic at approx. 7.25 deg usually goes 'unnoticed' in wider audience, while in fact that (perpendicular/equatorial) plane contains almost all angular momentum of the Solar system (not counting hypothetical Sun's twin), because the mass of Jupiter, as the largest planet in the system, is only about 0.001 of solar mass. Also, the orbit of Mercury, the only planet basically without precession and closest to the Sun is inclined about 7 deg to ecliptic (if it lies in or close to this Sun's plane of rotation, I don't know ATM, need to check). Well, that and other 'coincidences' are for another time and topic, what concerns us here is the potential effects on length of days on Earth.

iamthatis said:
I checked with good ol' Ben Davidson, and his take on the acceleration is that it is caused by the severe drop in the Earth's geomagnetic field. With shields down, this allows more energy into the system. "Higher supply, faster rotation - not unlike an electric motor".
Click to expand...

With Sun's (magnetic) activity being on the decrease as seen from the plot of solar sunspots cycles above, meaning less particles coming from Sun being confined by solar magnetic field, Earth-Moon system in general receives higher amount of influx energy (particles) from the Sun, which could be the reason why we see significant drop in day duration on Earth since 2016.


ScioAgapeOmnis said:
It's not perfectly correlated but there's definitely a general correlation. Maybe there's a lag - maybe the rotation speed changes and the sun takes a few decades to "catch up"? If so, we could hypothesize that the 1995-2003 dip in day length is correlated with solar cycle 24, the first one that was very weak. So roughly a 10-20 year lag. If so, then the dramatic dip that started in 2016 should reflect in the sun's behavior around 2026-2036. And that timeframe lines up with your link's prediction where the sun kinda bottoms out between 2028 and 2042.
Click to expand...

Maybe it's the other way around with the "lag" - maybe it takes material Earth (and Earth-Moon system) some time to 'catch up' whatever changes have happened with and around the Sun (and on spiritual plane, so to say)?

Just out published today- study was done prior to the recent acceleration last June.

Is THIS why the length of Earth's days has been increasing? Our planet's inner core may have recently paused and could be REVERSING, study reveals​ 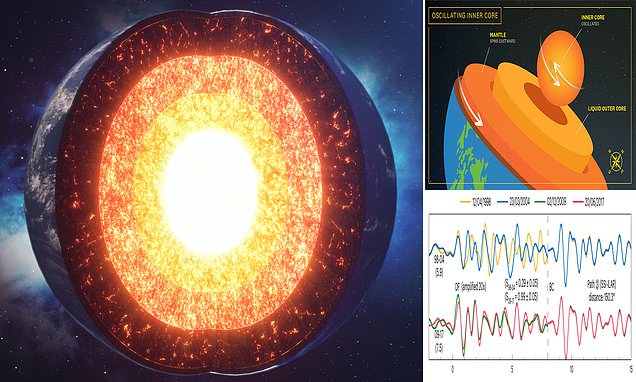 Rotation of Earth's inner core could be reversing and lengthening days

Calculations made by a team from Peking University in China reveal that the Earth's inner core may have slowed down, or even reversed, in the last 14 years, altering the length of a day.