Laura said:
Have a look.

What confuses me are the other symbols shown at the formation and are looking not like originals to me and the tractor lanes are also striking to the eye: 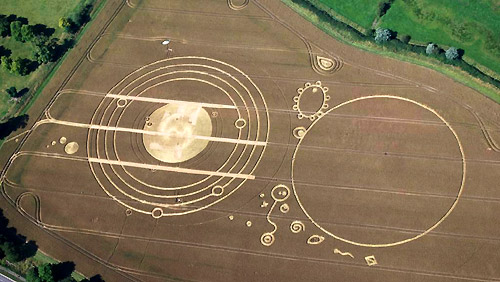 (this one is reported on the ?? (some sites say 15th of July, but would make no sense to me)

At least it is an interesting hypothesis that the sun gets bigger, whatever it means literally or in a real sense.

Administrator
Moderator
FOTCM Member
Any thoughts on whether they are even authentic? Do we have them on the thread here? Dates, images?

Since you ask, my impression is that they are not what we'd consider to be 'authentic' - or, at the very least, perhaps the first 'solar system' laid down was, but then the formation was messed with or added to. The squigglies especially look like classic STS additions, based on other examples of similar things. That's just my take, though...

Both of the cc's are recorded in the database here.

Unfortunately no, they are from 2008 and the 2008 cropcircle topic doesn't mention these ones (on this forum). And the best site with groundshots, field reports etc. is not accesible for none members (cropcirclyconnector.org), cause it is in the archives.

This is one site I found:

Also with a constellation picture:

Don't think it's authentic because it's too literal. Why would 6D draw out the solar system pointlessly....and what about the helical orbit theory? I say 4D STS minimalist art of NASA's solar system, with 3D STS enlargement of the "sun".

Laura said:
Have a look.

From what I've been able to tell, the first image (with the concentric circles) appeared on July 15, 2008. The second, blank circle and the symbols between the two appeared a week later on July 22nd. There are several references on different sites speculating that the 2nd appearance is disinformation or non-authentic.

Spanish TV program (english subs) on research into the aug. 15th 2011 circle (perhaps not so substantial, but entertaining):
_http://www.youtube.com/watch?v=S4GM5Loyo9g&feature=related

The surfer physicist Garrett Lisi's ted talk reffered to in above clip (I have no clue wether this guy's model is valuable or not?):
_http://www.youtube.com/watch?v=y-Gk_Ddhr0M

FOTCM Member
from memory yes the concentric solar system came first...and comments at the time identified it as the ominous date 21/12/2012....but then Red Collie ,I think,found it to be 23rd instead...which made me wonder at the time if our count of the mayan calender is maybe two days out :P
I wouldn't mind..it would make me a jaguar instead of a turkey vulture

then the farmer mowed into the formation
then the extra bits and big circle appeared
they were read as comet incoming and complicated moon orbit info the squiggles apparently a constellation
You must log in or register to reply here.
Share:
Facebook Twitter Reddit Pinterest Tumblr WhatsApp Email Link
Top Bottom