FOTCM Member
Liberal-States are competing with Red-States to make their way of life illegal. In doing so, they are disarming themselves. I see this as a win-win situation.


bjorn said:
Liberal-States are competing with Red-States to make their way of life illegal. In doing so, they are disarming themselves. I see this as a win-win situation.

Stew Peters now openly advised all American citizens that they should carry a gun with them at all times. Then he followed it up with a gun store ad. We have no guns in our country, so no city plaza shootings and no school shootings. The government tried to organize some bombings and shootings years ago, when it became prevalent in the US, but they failed, it fizzed out.

I think a gun wielder can become "God" quickly, turn into a manifestation of absolute force. Problem is when another one decides to wield a gun: this original gun wielder's "Godhood" quickly collapses into ordinary "combatant" status, losing all power. Running for cover suddenly.

Police armed with Hungarian AK-s (cheap trash version of the Russian one) were so "Godly" in their enforcer presence ~30 years ago, when they took the man living in the 1st floor apartment (below us), because he was a security guard at a company that "suffered" a break-in and probably a good amount of goods were stolen. He might have been named as patsy.

Also, while I was in the army in the capitol of Hungary at a base with guards carrying AK automatic rifles loaded with live-ammo all around the place all the time.. which base was of course a large chemical storage compound for military supplies.. And during the time I served there it came to light [?!] that large amounts of those supplies were regularly stolen. Oh, God, noo!

So what did they do? Well, there was a clueless, two-bit soldier in the guard detail, who knew nothing. But even if he witnessed the thefts maybe he was told / threatened / bribed with a beer to let the thieves go, if ever he sees them on guard duty.. This was a regular theft organized by the compound-guard force: they sold what they managed to carry out of the base regularly.. So this stupid, two-bit soldier was named as The Mastermind of all theft from the base.

Never mind the inordinate amount of stealings well pre-dated this unfortunate soldier's duty time, but who cares? He was sentenced by military court and put into prison - a nice criminal record to start off his life-career -, from where he was crying and writing letters to the base commander, that he was framed. But probably the officers were in on it as well, so he was turned into their Lucky Strike, the perfect patsy.

I suspect something similar must have happened with our downstairs neighbor as well. I remember living as a child in a dreamy life, then one day I'm looking out of the second floor kitchen window - where I usually was observing green grass, birds, trees, dogs getting walked, other children playing at the playground nearby - but this time I see at least four police "90's storm-troopers" with AKs surrounding this poor patsy, who was kneeling on the ground with hands on his head and was taken away..

Amazing gun stuff: lots of power they give. Except magically no gun-heroes are emerging in the US to solve their situation. It appears as if are a herd of proud gun-owner sheeple in there.
Last edited: Dec 12, 2021

FOTCM Member
That makes them even more resentful of Biden.

FOTCM Member
Florida and Texas have been taken over by right-wing extremists capable of launching nuclear weapons. Send in the troops. And since the U.S. military can't be trusted to fight the militias. Who they consider fellow Americans and patriots. Send in an International military force to do the job. 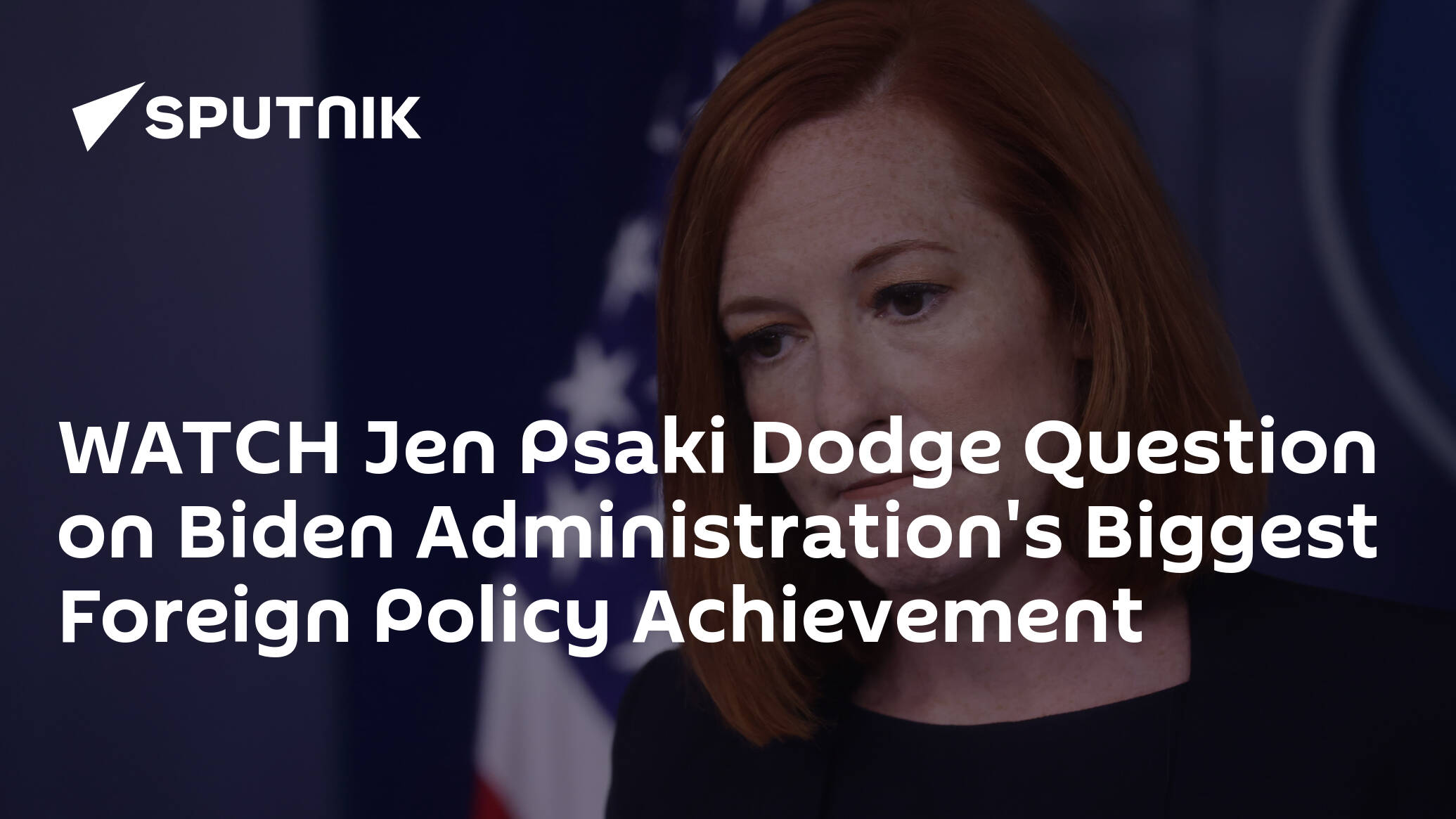 One would think that naming the government's achievements should be an easy task for a press secretary, whose job it is to to present the administration in a positive light, answering tough questions on nearly a daily basis, yet this is one Jen Psaki decided to dodge.

sputniknews.com
By Max Gorbachev - 2 hours ago

FOTCM Member
Please steal the election again. No one is more hated than her.

"If Michele runs, she wins. She’s great, she’s intelligent, she’s articulate, she’s the wife of the best president that we have had in our lifetime in terms of like a representative of intelligent articulate people. The only thing could stop it/her if she bought into some of these policies that are destroying businesses in America and making people scared."
Click to expand...

Whats the next level for Joe Rogan? Musk or Cheney for president?
Everybody is pushing Michelle Obama for some reason, except Michelle Obama, who said he/she/it doesn't want to be POTUS. Yet..!

I guess this is The Great Priming before [the Great Panjandrum (demonic wailing reaching top pitch during exorcism, term from the book of Malachi Martin, Hostage to the Devil)] before massive mass mind-control-gun barrage is unleashed onto the unsuspecting US populace..
Dunno, why they are bothering with this election circus.. Because US citizens have guns? Fear of loss of control?

FOTCM Member
'Did you discuss with Zelensky about the Hunter Biden's role at Burisma?' 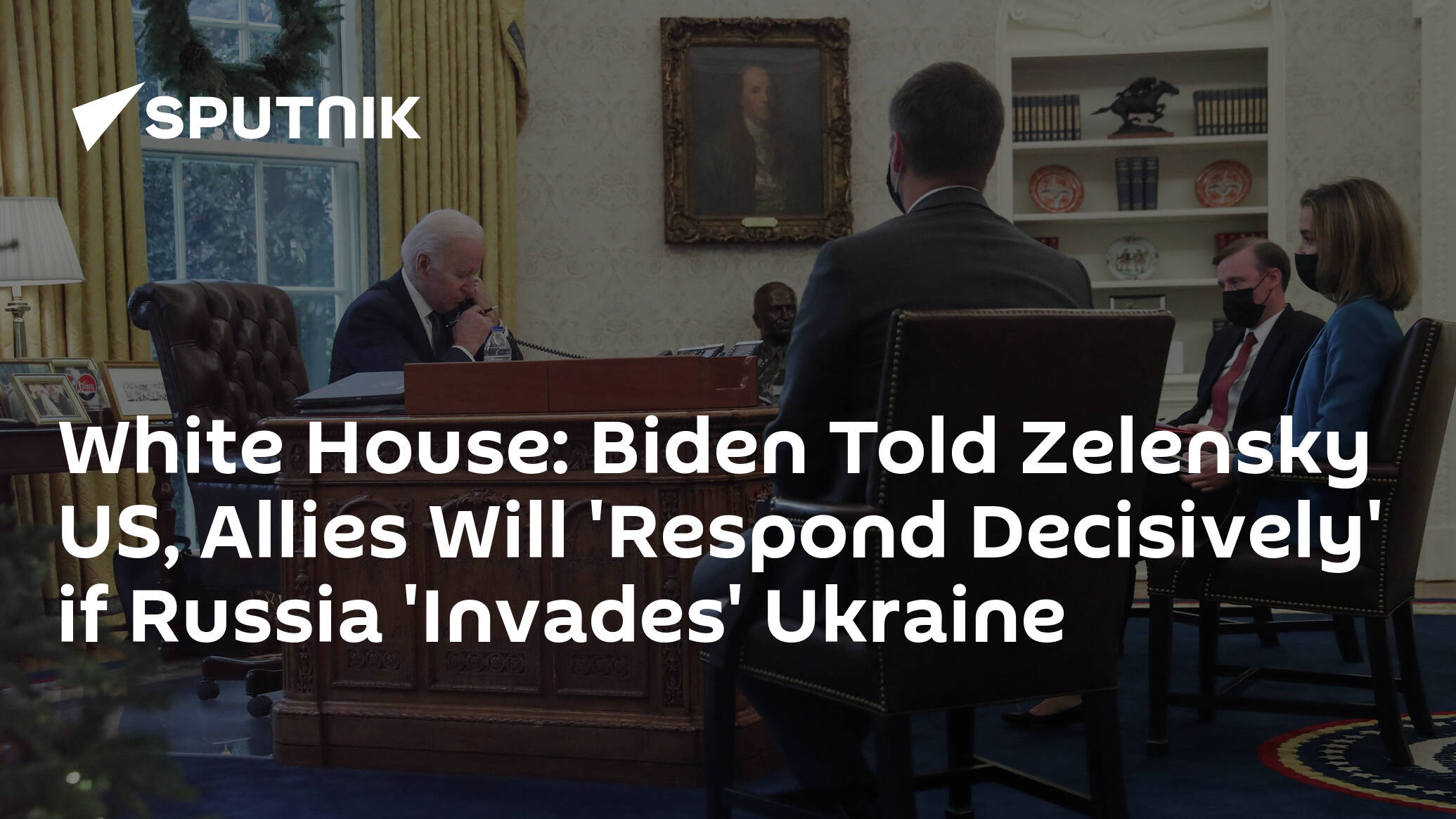 On Sunday, United States President Joe Biden spoke with Ukrainian President Volodymyr Zelensky to detail that the US and its allies would "respond decisively if Russia further invades Ukraine."

sputniknews.com
By Nevin Brown - 10 hours ago

sToRmR1dR said:
'Did you discuss with Zelensky about the Hunter Biden's role at Burisma?'

On Sunday, United States President Joe Biden spoke with Ukrainian President Volodymyr Zelensky to detail that the US and its allies would "respond decisively if Russia further invades Ukraine."

sputniknews.com
By Nevin Brown - 10 hours ago
Click to expand...

I have been continually telling RT that Russia and Putin has been bought and paid for by the Deep State. They don't like it one bit.
Clearest proof for that is the 2015 "liberation" of Syria, after restoring the Western half of the country to Assad, Putin declared terrorists have been cleared from there. Since then we continually are hearing about assassinations of Syrian military leaders and that the exact same "liberated" area is infested with ISIS rat nets.
Observe how much changed since then, the Idlib map remains terror-green - meaning ISIS occupation - for how long now? Three or four years? But rest easy as the Mighty Russian AirForce is continually pummeling ISIS with air-strikes in Syria.
For what? To preserve the status quo? Israel is getting wasp-crazy and bold with its attack on Syria..

Forever promises ongoing and guess-works from military analysts that the SAA will invade Idlib any time now has been going on from the time when the SAA army push toward North curiously halted.
Then Putin started advertising the Amazing Vaccines and How To Convince People to get themselves jabbed with the satanic poison.

Now Putin is holding "talks" with Biden. Try to create a conversation with a demented US patsy, who doesn't know where he is, but loves ice cream. Maybe Putin is trying to bribe Biden with ice cream?

Margorie Taylor Green (R-GA) asks the Government of the United States to do their job properly, as she "asks for the recorded vote" @ 1:14:40 of this video, when passing a bill. Worth watching, I think.

Administrator
Moderator
FOTCM Member
The regime is today 'going massive' on commemorating 'the Insurrection of January 6th'. Here's Biden 'addressing the nation' by reminding everyone in the strongest terms that Trump absolutely did NOT win the 2020 election...

FOTCM Member
Biden's MO> If I say it then it's true.

"Afghanistan pull out was a great success!"
"I'll conquer COVID by July after becoming president!"
"Build Back Better is fully paid for and will not cost a dime!"
"President Harris will take care of the border issue!"

FOTCM Member
'What a strategy.' sputniknews.com
By Tim Korso- 2 hours ago

Remember that "insurrection" in DC in 2021 ???
Yeh, that was terrible and violent. Bad bad people "stormed" the Capital. Especially the Viking.