Best to backup the image here, tweet can be suppressed.

XPan said:
However somewhere around march-may 2021, i got a couple times a strange “urge” by thinking “what if I would…” … kind of like flirting / playing with the thought of taking a jab. Not super seriously, but it was a persistent flirtation during a couple of weeks - while i observed that with awareness.

These thoughts, made no sense to me, given how much I already knew about the negative side effects - and endless hours of listening to the Investigative Corona Committee from Berlin plus everything you guys wrote in the forum !!

So, it was really a weird experience - which I couldn’t explain why I would consider to even “flirt” with the jabs.

I didn’t associate that to any external influence, but more of a psychological spill-over effect from reading mainstream news and pages at authorities.
Click to expand...

Same for me. Out of the blue I got the thought to take the vax at least on two occasions. Crazy, right??! I chalked it up to "psychological spill-over effect" from my almost constant immersion in the subject matter via this thread/Sott/other alternative sources along with usual awareness of MSM propaganda. I equated it with the intrusion of negative thoughts/negative thought loops. So, one can speculate that we are being beamed in addition to the avalanche of constant pro-vax messaging.

As to Trump and the supposed reason for Warp Speed - perhaps plausible but it's not sitting well with his base. I didn't save the link, but he was loudly booed by his audience at a recent Trump event when he began touting the "vaccines".


Ellipse said:
According to a whistleblower employed at Pfizer not 45,000, but 200,000 people who died within 7 days of receiving one of the vaccines.
Click to expand...

I believe in the Mike Adams/Reiner Fuellmich vid, they said very likely 500,000 deaths.

BTW, the Arnold has lost his sponsor due to his repugnant remarks: 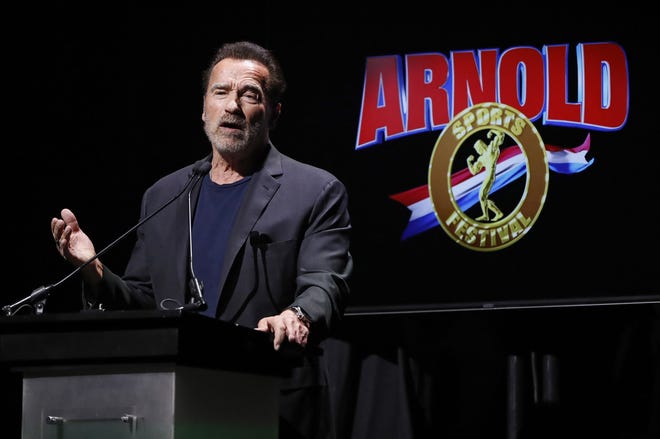 The actor and former governor of California lost the long-time sponsor for the annual bodybuilding competition due to controversial comments he made during an interview with retired U.S. Army Lt. Col. Alexander Vindman and CNN reporter Bianna Golodryga.

The star of "The Terminator" franchise called Americans who are opposed to wearing face masks "schmucks" and said, "screw your freedom."
Click to expand...

And, that's not the only local reversal to popular celebrity/MSM drivel:

Hundreds of people demonstrated outside the Ohio Statehouse as lawmakers there held a hearing on a contentious anti-vaccination bill.

Opponents of masks and vaccine mandates rallied in favor of House Bill 248, even though legislative leaders have already said they're pumping the brakes on it for now. [...]
[...]
Click to expand...

More than 400 people filed written testimony for Tuesday's committee hearing. Supporters in an overflow room cheered state Rep. Jennifer Gross, R-West Chester, primary sponsor of the bill, like a rock star when she asked questions of witnesses during the hearing.

House Bill 248 has triggered enormous controversy in Ohio. Witnesses favoring medical choices and less government oversight, as well as those prone to believing conspiracy theories, have pushed for its adoption. In June Dr. Sherri Tenpenny testified that the COVID-19 vaccine may magnetize people and have some sort of interface with 5G cellphone towers. Tenpenny was invited to speak by Gross.
Click to expand...

[Can't copy caption but still declaring she gave false testimony that went viral and made false claims about the vaccines against Covid-19.]

Anti-vaccination protests have erupted across Ohio, where demonstrators have blasted businesses for requiring mask and or vaccines and called for passage of House Bill 248.
[...]
The Ohio Chamber of Commerce issued stern warnings to lawmakers to drop HB 248 and butt out of telling businesses how to operate. In a recent interview, CEO Steve Stivers said he doesn't expect most businesses to require vaccines but contends the bill is a slippery slope that could lead to more government regulation.
Click to expand...

"The anti-business Republicans tend to be more populist generally, but this one is a very, very dangerous bill that I think moves us toward the government controlling the means of production," he said. "Every Republican and Democrat should think about whether they want to be part of that."

The former GOP congressman also blasted lawmakers for introducing the measure as businesses are poised to lose temporary protections against lawsuits related to COVID-19.
Click to expand...

Hundreds of people demonstrated outside the Ohio Statehouse as lawmakers there held a hearing on a contentious anti-vaccination bill.

Article appears to be a repeat of previous above. There are real, significant differences between the hard copy newspaper and its online version. I have to use online search to find articles that appear in the actual newspaper and sometimes have to resort to Google/other.

Nevertheless, here's an even more relevant article on the first page of the METRO section:

So, there you go - MISSION ACCOMPLISHED! Or so they will try to make everyone believe! I immediately sent off an email to OhioStandsUp detailing that the existing Pfizer vax is STILL EUA along with the tweet of Dr. Robert Malone explaining approval was for BioNTech Comirnaty and that it isn't even available! We'll see how long this turd can float!!!

Analyzing the news to give you a clear picture of what\'s really going on.

As students return to classrooms in the fall, Ohio's Medicaid managed care plans expanded their $100 incentive for getting a first COVID-19 shot to child members age 12 and older.

“Getting students 12 and up vaccinated will provide peace of mind to parents, caregivers and educators,” said Kelly O’Reilly, CEO of the Ohio Association of Health Plans, in a statement. “Vaccination is the surest way to protect teens against COVID-19.”

Adult Medicaid participants already qualify for the incentive, which will now run through the end of the year instead of Sept. 15.
Click to expand...

"will provide peace of mind to parents, caregivers" - um, rather Rest In Peace for these child victims! I mean really - just reading that line should raise big red flags!!! 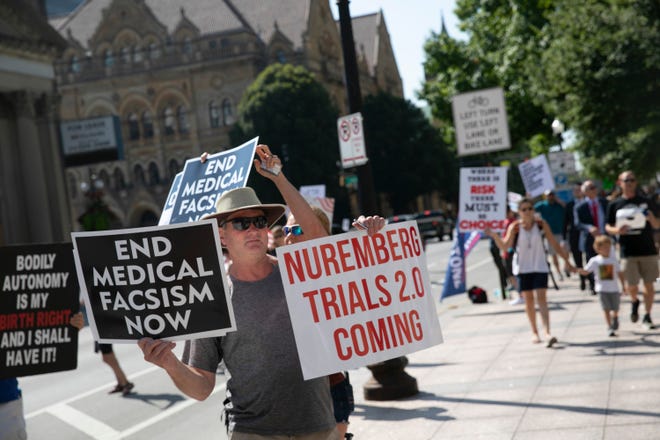 Anti-vaccine demonstrations across Ohio in recent weeks are drawing extremists that include conspiracy theorists, white supremacists and people who misappropriate the Holocaust.

Outside the Ohio Statehouse on Tuesday a man displayed a Proud Boys flag while wearing the group's signature black and yellow polo shirt. Another man carried signs saying "End Medical Facsism (sic) Now" and "Nuremberg Trials 2.0 Coming." They were among hundreds of demonstrators who rallied in favor of an anti-vaccination bill.
Click to expand...

Outside of Natalie's Coal-fired Pizza in Worthington on Aug. 14, the Proud Boys stood alongside Moms Against DeWine, Ohio Advocates for Medical Freedom and a man who posted an extensive video where he spewed antisemitic rhetoric.

The Anti-Defamation League identifies the Proud Boys as a multi-state group that expresses misogynistic, transphobic and anti-immigrant views as well as some white supremacist and antisemitic ideologies.
Click to expand...

Natalie's co-owner Charlie Jackson declined to comment on the protest, which came after the music venue announced it would require masks or proof of vaccination for employees and customers.

Proud Boys members could be seen at anti-vaccine protests outside of Kettering Medical Center near Dayton and Mount Carmel East in Columbus, according to photos posted by media outlets. Other demonstrations have been held in Akron, Mansfield, Cincinnati, northern Kentucky and elsewhere.
Click to expand...

I really can't wait till the despicable sh*ts behind this scamdemic genocide are outed for who they really are!

"will provide peace of mind to parents, caregivers" - um, rather Rest In Peace for these child victims! I mean really - just reading that line should raise big red flags!!!

I really can't wait till the despicable sh*ts behind this scamdemic genocide are outed for who they really are!

"Opposition to lockdowns and vaxx mandates is antisemitism" is probably not a strategically intelligent message for them to be sending.

I know it's cruel to laugh but I'm still laughing.

Intelligent is out to lunch! Someone should send Howie Beigelman, director of the Ohio Jewish Communities, the vid of Dr. Zelenko and the Rabbis! That he can't grasp the similarities to the Holocaust™ - which no other people are officially allowed to have experienced - is beyond rational thought! They should be bowled over by the parallels!

Ellipse said:
There is the silk too. To sleep in silk and wear silk.

I saw that real silk contain copper coming from mulberry tree leafs ate by the silkworms.
Click to expand...

I looked into this... silk pajamas can be very pricey too. Then there are brands that seem too cheap, as if they must be poor quality or something. Is there a brand you like, @Ellipse?

FOTCM Member
What's happening after October 1st?
President of Mexico also said they're aiming for all the adult population to have at least the 1st shot by October.

Note: I remember reading somewhere that in a time of distress those in power set random deadlines that are hard to meet. Everyone will be so stressed out trying to meet the deadline. After that they will look for the next order/instruction and most likely comply without questioning.

Is that what's going on here?

Busta Rhymes has gone and done it. He's got multiple outlets to write organically generated articles about him all saying the same thing

Roadhizzy said:
Just more coercion tactics to try and get maximum saturation of the trash before the numbers are undeniable that the "cure" is worse than the disease
Click to expand...

Remember to use the reply button so we know the context.

psychegram said:
Remember to use the reply button so we know the context.
Click to expand...

Heather said:
I looked into this... silk pajamas can be very pricey too. Then there are brands that seem too cheap, as if they must be poor quality or something. Is there a brand you like, @Ellipse?
Click to expand...

Not especially, the important point is to be sure this is real silk and not Rayon. The pajamas is a good idea, I will try to find one. I use silk sheet or silk sleeping bag with a hood. I bought it in a camping shop.

I see this on the shop site (French site):

Models made from silk and silk/cotton blends have increased significantly. Our supplier of silk and silk blends tells us that the price of silk produced in Asia has almost doubled.
Click to expand...