RedFox said:
He does mention knowing and getting along with many business types/higher ups - and that he'd even label himself as one. Hence my impression that if you call out psychopaths, he takes it personally at some level.
Click to expand...

I suspect, although he is aware of the issue of psychopaths, that his understanding might lack in terms of understanding the extent that pathology plays a role in normal society. I guess he has a bit of a blind spot there, especially in regard to the idea that there are quite a lot of highly successful psychopaths in high positions of power. He might also be unaware of the true extent that a successful psychopath can fake to be a normal human being and that it is only by long term observation via a network type of setting that some of them (not all) can be exposed.


Mike said:
I think he responded that he has a very trust group of friends and colleagues that he talks to and networks with. I'd imagine that they have many discussions about many topics and his thoughts on topics, where he is not an expert, is very much shaped by this group of people and also what these people believe, and it is possible, and even likely, that these people haven't done a deep dive on the topics and/or have biases and sacred cows for various reasons.
Click to expand...

I also suspect that some of the company he frequents in that circle might play a significant role on why he can't go in certain directions. I think the Israel topic is a good example of this. He might also be a bit too favorable to successful and/or famous and/or intellectual types, in the sense that he might brush over "red flags" more easily with those people, in the belief that just because they have that standing that they are a bit "more advanced" as the average Joe. Some of the most famous and "brilliant" intellectual types can be the most rotten human beings at the same time.

RedFox said:
That's good to know! James picking it up was great, and I'm certain that Malice gets it at a gut/instinctual level.
Click to expand...

I listened to the interview, and now I can see better why Peterson responded they way he did. I can see where Malice was coming from, but he didn't make a great case. He over-generalizes. That was Peterson's point when talking about congressmen and businessmen. They're not all evil in the way Malice thinks. Yes, they may do evil things, but there's still a difference between an 'average' selfish person with a weak conscience and a psychopath. And Malice's response to imagining himself as a concentration camp guard was illogical. He argued that because he is of Jewish Ukrainian descent, he wouldn't have even had the opportunity of being put in such a situation, which misses the point completely. Maybe he IS one of the few who would resist the pressure, but Peterson's point is that you shouldn't be so sure, because MOST people think that, and yet MOST people would still go along with it when push comes to shove.

That's not to say that Peterson's take is perfect either, though. As Malice said, some people are just pure malevolence, which Peterson tends to downplay in conversations like this. The Milgram experiment, or the example of Reserve Battalion 101 in Nazi Germany, are good demonstrations of all of these points. Most people gave deadly shocks, and most policeman murdered men, women and children, but they did so for different motivations. Most people were uncomfortable giving the shocks, some extremely so. A minority enjoyed it or had no problem with it. Same for the death squads.

Ambassador
FOTCM Member
At least one good thing happened due to progressive craziness.

In September 2019, the streets of Auckland, New Zealand, were a sea of protesters. Across the globe, several million people were marching as part of the “School Strike 4 Climate” youth movement sparked by Swedish teenager Greta Thunberg. But few demonstrations were more sweeping than the one in New Zealand’s largest city, where up to 80,000 marchers filled the streets.

Less than two years later, however, one of the groups that organized the Auckland event is disbanding because of what it says is its own racism.

In a Facebook post, School Strike 4 Climate’s Auckland chapter said it was shutting down because it “has been a racist, white-dominated space.” It directed people concerned about climate change to Indigenous-led groups and said it would not be organizing any more climate strikes.
Click to expand...

Keit said:
At least one good thing happened due to progressive craziness.

Now, they are canceling themselves. Hilarious.

FOTCM Member
All of this is going to end in genocide and gulags.

Ambassador
FOTCM Member
From another thread:


Pashalis said:
Mikhaila Peterson talking to JP Sears about things like his political commentary about the Corona-Nonsense and conspiracy theories (some wacky ones among them):

again. I can’t comprehend someone actually accepting, internally, what this wokist mob is pushing... 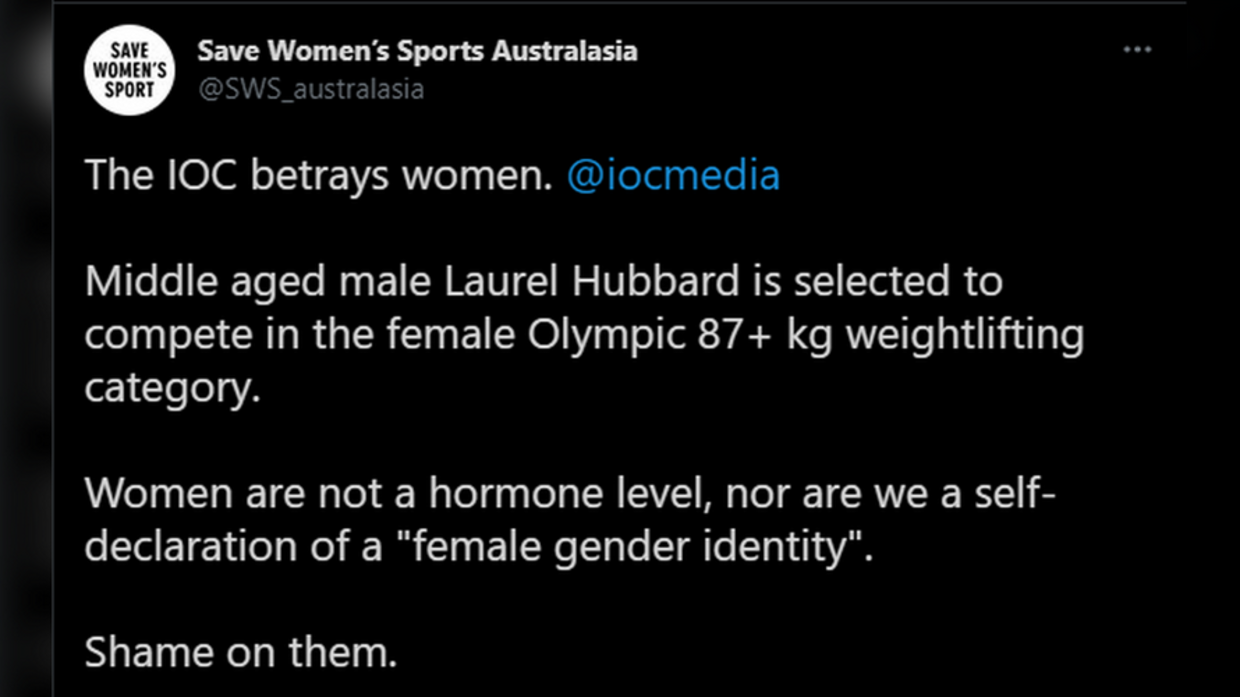 New Zealand has been accused of undermining female athletics after tapping trans weightlifter Laurel Hubbard for the upcoming Olympic Games in Tokyo, with some even describing the decision as outright cheating. The New Zealand Olympic Committee...

If only more women around the world would boycott all contest with transmen participating, maybe something would happen.
But I don’t see that happening…

New Zealand has been accused of undermining female athletics after tapping trans weightlifter Laurel Hubbard for the upcoming Olympic Games in Tokyo, with some even describing the decision as outright cheating. The New Zealand Olympic Committee...

If only more women around the world would boycott all contest with transmen participating, maybe something would happen.
But I don’t see that happening…

All of this is meant to erase the concept of men and women. Some red states in the US have banned this.

My partner just showed me this and we had a talk about it. I was surprised to see it here after the conversation, so thought I'd share a bit. One of the few issues we happen to agree on (wasn't expecting that, but glad to hear it from them).

Thanks for sharing it.

It's not fair. Biologically the muscle composition and ability is different for men and women. It's then too easy for a male athlete to identity as a female. It becomes a way to 'cheat' to win. I was a runner at one point, so the way I explain what I think about this to people when they ask, goes: if I wanted to win every race, I'd just identify as female', most people seem to understand that. And most seem to agree, on principle at the least.

Ambassador
FOTCM Member
Peterson had this up (having had representations of this before) Best Lessons Learned (Jun 14th, 2021). It is really a nicely done talking sketch of the issues:

In this animated lecture selection, Jordan Peterson discusses the important lessons about picking your sacrifice, pursuing a noble aim, and facing suffering voluntarily....
Click to expand...

This is Kuinini Manumua who trained hard to compete at the Olympics. She lost her spot on the team thanks to "Laurel".
Click to expand...

(thanks for the catch Hello H2O)

I first watched her story with Dave Rubin, and was amazed. So incredible, so sincere, and so well put together. On the edge of unbelievable, and kind of ‘too well done’ If done for disinformation purposes then my conclusion was: Bad China, and Bad N. Korea, we can war with them. But I just let it go from there. Then…

Makaila Peterson interviewed her shortly after Rubin. I watch to see, ok, is there something more or new. But it was the same story. I chalked it up to ‘just wanting the new sensational story’. Then…

JP had the same interview and again I watch to see what new information would come out, but same exact story. I thought surely JP has seen Makaila and Rubin's videos which were well done and still out there so why repeat it? It seemed redundant.

I can’t besmirch JP, MP, DR, or Yeonmi Park for this story. Just putting a question mark, and placeholder here.
Click to expand...

Yeonmi Park telling (or selling) her story isn't new. She's been doing it since she was a teen star on a South Korean TV show (where she earned, and apparently enjoyed, the moniker 'Paris Hilton of Korea'). Here's one interview with her on YT from 6 years ago, with 3.6M views. My impression from the Jolley article about her - published way back in 2014 - is that she's a rich girl (i.e., of the North Korean elite) who had little idea about the politics of North Korea until she was 'educated' about such by American 'defector' programs and 'entertainment' agents in Seoul - not least by one Casey Lartigue Jr., who publishes articles about himself being 'The Man'.

There's a decades-long US-South Korean anti-North Korea intelligence/disinformation network in South Korea, which churns out almost everything the world hears about North Korea. It's mostly fake news based on fake intelligence.

Park is making the rounds again because of this new angle - that the US is 'becoming like' North Korea. I suppose there are similarities in terms of state indoctrination (which in the West happens through 'private' media and, as Park herself experienced, the education system), but the Western flex to compare every latest expression of ideological madness 'at home' with 'Commie China, Korea, etc'. is often misplaced. For starters, those countries are socially conservative, so the whole sexual liberty shtick doesn't even apply to them.

As an aside, there was no lockdown in North Korea last year (save a brief one in a single city, I think), no mandatory muzzle wearing, and Covid-19 vaccines are offered but not forced on anyone.
Last edited: Jun 22, 2021
You must log in or register to reply here.
Share:
Facebook Twitter Reddit Pinterest Tumblr WhatsApp Email Share Link
Top Bottom