Former US Ambassador to the UN Samantha Power has published a tweet suggesting that recently deceased Senator John McCain wanted to send "a parting message" to Russian President Vladimir Putin and his American counterpart Donald Trump via his funeral ceremony.

Power claimed that the senator had specifically requested that Ukrainian President Petro Poroshenko and NATO Secretary General Jens Stoltenberg be seated beside each other during the ceremony to indicate to Trump and Putin that the US "stands with its friends and allies."

Surely no coincidence that #JohnMCain - who planned every detail of today’s memorial - invited Ukraine’s President @poroshenko & seated him beside @jensstoltenberg, head of NATO. A parting message to Vladimir Putin & @realDonaldTrump: America stands with our friends & allies.
2:33 PM - Sep 1, 2018

Republican Senator John McCain passed away on August 26 soon after stopping his treatment for brain cancer, citing declining effectiveness due to the aggressive nature of the illness and old age. He was known for his tough stance towards Russia and harsh criticism of Putin, supporting lethal arms supplies to Ukraine. McCain was also opposed to many of Trump's policies, even organizing resistance against his attempts to scrap Obamacare.

Administrator
Moderator
FOTCM Member
That video is gruesome and well worth sharing on FB and Twitter. McCain was an evil spawn of Satan.

All I remember is his "frozen shoulders" aka bad posture. At least he's resting at last.

Oh wait and on the news this morning, the host said his ceremonial burial ( or forget what it was called ) happened yesterday and then corrected himself saying Sunday. I thought it was odd for this radio host to mess up this badly on what day something happened was. It's like he had not had his Labor Day.
Z

Terrific song BTW and that's coming from a looong time TomPetty fan. Here's the audio only: Songbird John
Last dance for John McCain [...] for a tumor in his brain
I see liberals weeping and I'm popping a bottle of champagne

FOTCM Member
Very cool compilation, weren´t it for my sorrow from knowing John McCain´s vacant post will likely be soon replaced by another easygoing devil. But I still had a good time watching the well made set-up between McCain´s dire accusations and the comic facial expressions of Putin, this will help further enjoying my day.
A

hesperides said:
Very cool compilation, weren´t it for my sorrow from knowing John McCain´s vacant post will likely be soon replaced by another easygoing devil. But I still had a good time watching the well made set-up between McCain´s dire accusations and the comic facial expressions of Putin, this will help further enjoying my day.
Click to expand...

Arizona Governor Doug Ducey said in a statement on Tuesday that former Senator Jon Kyl will return to Capitol Hill to serve in late Senator John McCain's seat at least through the rest of the year.

"I am deeply grateful to Senator Kyl for agreeing to succeed his friend and colleague of so many years," Ducey said in a Twitter message. "Every single day that Jon Kyl represents Arizona in the US Senate is a day our state is well-served."

In a press release, Ducey's office said Kyl will serve through at least the second session of the 115th Congress, which ends this year.

McCain's widow Cindy said in a statement it is "a great tribute to John that he [Kyl] is prepared to go back into public service to help the state of Arizona."

happyliza said:
Well as we say we do need these pesky tyrants and petty tyrants down here on the school/hospital! For 3D learning purposes.
Click to expand...

If by "tyrants" you mean psychopaths, I say we don't need psychopaths. They're a step too far because children are born into bondage. We could go round and round regards pre-determined karmic destiny profiling chosen at the contemplation zone, but its supposition not least because souls can be 'tricked'. Besides, it comes down to this: Either we find the actions of psychopaths wholly abhorrent - or we don't. There's no in between... Learning lessons be damned!
4D STS and their 3D(2d) psychopath-agents are the prime cause for evil manifested here on Earth. Psychopaths are an "important" 3D lesson in so far as collectively what to do about them ie their total removal for the sake of future 3D incarnating generations if we were to acquire the necessary power to do something about it. Is the lesson to learn here to avoid the psychopath through learning to rise above our 3D strangle-hold via individuated advancement to 4D graduation? Or... Is to leave behind our lesser soul-developed brothers and sisters to the mercy of 4D STS and proxies - is to leave behind a bad taste and all that that implies?

Administrator
Moderator
FOTCM Member
The best defense against psychopathy is networking.
A 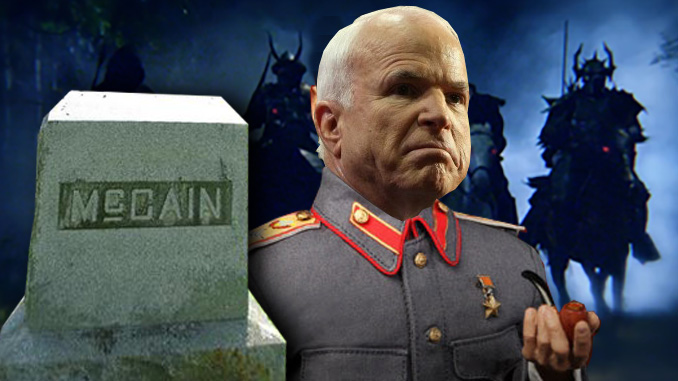 Could the death of warhawk-in-chief and lead coverup artist Senator John McCain usher in a new era of peace?

“McCain’s Death Leaves Void” ran The Wall Street Journal headline over a front-page story that began: “The death of John McCain will leave Congress without perhaps its loudest voice in support of the robust internationalism that has defined the country’s security relations since World War II.”

Certainly, the passing of the senator whose life story will dominate the news until he is buried at his alma mater, the Naval Academy, on Sunday [Sept. 2], leaves America’s interventionists without their greatest champion.

No one around has the prestige or media following of McCain.

And the cause he championed—compulsive intervention in foreign quarrels to face down dictators and bring democrats to power—appears to be a cause whose time has passed.

When 9/11 occurred, America was united in crushing the al Qaeda terrorists who perpetrated the atrocities. McCain then backed President George W. Bush’s decision to invade Iraq in 2003, which had no role in the attacks.

During Barack Obama’s presidency, he slipped into northern Syria to cheer rebels who had arisen to overthrow President Bashar Assad, an insurgency that led to a seven-year civil war and one of the great humanitarian disasters of our time.

McCain supported the expansion of NATO into Eastern Europe and the Baltic, right up to Russia’s border. When Georgia invaded South Ossetia in 2008, and was expelled by the Russian army, McCain roared, “We are all Georgians now!” He urged intervention. But Bush, his approval rating scraping bottom, had had enough of the neocon crusades for democracy.

McCain’s contempt for Russian President Vladimir Putin was unconstrained. When crowds gathered in Maidan Square in Kiev to overthrow an elected pro-Russian president, McCain was there, cheering them on.

He supported sending arms to the Ukrainian army to fight pro-Russian rebels in the Donbass. He backed U.S. support for Saudi intervention in Yemen. And this war, too, proved to be a humanitarian disaster.

McCain was a war hawk, and proud of it. But by 2006, the wars he had championed had cost the Republican Party both houses of Congress.

In 2008, when he was on the ballot, those wars helped cost him the presidency.

By 2016, the Republican majority would turn its back on McCain and his protege, Sen. Lindsey Graham (R-S.C.), and nominate Donald Trump, who said he would seek to get along with Russia and extricate America from the wars into which McCain had helped plunge the country.

Yet, while interventionism now has no great champion and has proven unable to rally an American majority, it retains a residual momentum. This compulsion is pushing us to continue backing the Saudi war in Yemen and to seek regime change in Iran.

Yet if either of these enterprises holds any prospect of bringing about a more peaceful and prosperous Middle East, no one has made the case.

While the foreign policy that won the Cold War, containment, was articulated by George Kennan and pursued by presidents from Truman to Bush I, no grand strategy for the post-Cold War era has ever been embraced by a majority of Americans.

As for the Bush II crusades for democracy “to end tyranny in our world,” the fruits of that Wilsonian idealism turned into ashes in our mouths.

But if the foreign policy agendas of Bush I and Bush II, along with McCain’s interventionism, have been tried and found wanting, what is America’s grand strategy?

What are the great goals of U.S. foreign policy? What are the vital interests for which almost all Americans believe we should fight?

“Take away this pudding; it has no theme,” said Churchill. “Britain has lost an empire, but not yet found a role,” was the crushing comment of Dean Acheson in 1962. Both statements appear to apply to U.S. foreign policy in 2018.

We are bombing and fighting in Afghanistan, Iraq, Syria, Libya, and Yemen, partly McCain’s legacy. Secretary of State Mike Pompeo has sent a virtual ultimatum to Iran. We have told North Korea, a nuclear power with the world’s fourth-largest army, either to denuclearize or the U.S. may use its military might to get the job done.

We are challenging Beijing in its claimed territorial waters of the South China Sea. From South Korea to Estonia, we are committed by solemn treaty to go to war if any one of dozens of nations is attacked.

Now one hears talk of an “Arab NATO” to confront the ayatollah’s Iran and its Shiite allies. Lest we forget, ISIS and al Qaeda are Sunni.