Laura said:
I've been noticing my earthquake notifications have been coming in practically every day with one or two 5 or 6 pointers; they are like bouncing all over the planet.

Been crazy busy and away from forum for awhile, but finally have some me time, and this thread caught my attention.

Part of my morning routine is to catch Ben Davidson's short YT video on Space weather and Earthquake watch/predictions. He gives a clear and concise rundown of what's going on with Sol and how it is affecting our weather and gives alerts for earthquakes based on solar wind/density and Earth's kp index - all in under 8 or so minutes, complete with links for the information sited.

What's been up for the last few days is Earth's kp index, which relates to increased earthquake activity. Kp index rose into the red when solar storm/wind from the Earth facing equatorial coronal hole reached Earth this weekend.

Suspicious Observers is a great science-based site which compliments what has been discussed and covered on this forum as well as the books recently written about Earth changes.
Today's video, which includes the kp index for the following few days can be viewed here:
Sun, Earthquake, Record Weather, Too-Weird Science | S0 News Sep.30.2019

I'm thrilled to have found this fact-based site because it compliments everything I've read thus far from Laura, Ark, Pierre and the many observant forum contributors on this site regarding what's in store for us. He is laser focused on the science aspect and scrutinizes information intelligently, IMHO.

If some of the information seems to be over your head, there are plenty of tutorial videos offered freely on .org site, as well, for those who want to immerse themselves in space weather science and how it relates to Earth's climate and geological effects.

Hopefully, with the increasing acceptance and understanding of climate forcing data, the whole human-caused climate change hysteria can be taken down a few notches, if not squelched completely.

Laura said:
I've been noticing my earthquake notifications have been coming in practically every day with one or two 5 or 6 pointers; they are like bouncing all over the planet.

And I agree with you that 'something big is coming.'

sToRmR1dR said:
And I agree with you that 'something big is coming.'
Click to expand...

I think tend to be inclined (like the info the transcripts provide), it's also the continued energy buildup with the onset of the Wave. And most obviously the creme de la creme. Everything is vibrating at high and low frequency.

Plus the Comet cluster can't be to far behind.

It started with a 2.6 magnitude temblor around 11:18 a.m. near Lilbourn, a small city just north of Missouri’s boot heel, according to the United States Geological Survey. A mere three minutes later, a 1.1 magnitude quake rumbled nearby.

It would be 23 minutes before the next quake, another magnitude 2.7, shook an area just west of Lilbourn, the USGS says.

All five quakes happened within a 40-minute window.

The area near Lilbourn is part of the New Madrid Seismic Zone, according to the Missouri Department of Natural Resources. Quakes along the fault line have been felt across the south and Midwest in Alabama, Arkansas, Illinois, Indiana, Kentucky, Mississippi, Missouri and Tennessee, the department says.

Experts say the zone is responsible for what are believed to be North America’s most intense earthquakes — ranging in magnitude from 7.0 to 8.0 — which caused the Mississippi River to run backwards in the early 1800s, the department says.

A crazy coincidence or portent of doom?
Note the bells tolling in the background

Skyfarmr said:
Did you catch this? Fiery Streak on St Louis's Gateway Arch
Click to expand...

No. And it is kind of eerie! Thanks. 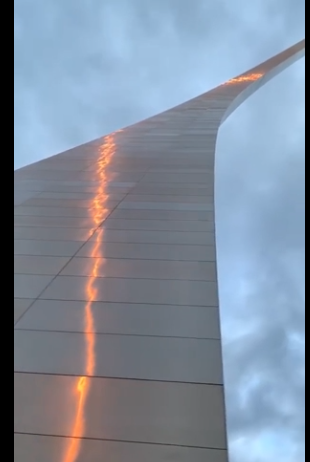 Three of the injured are reported to remain in serious condition, according to privately-owned Radio Zet.

Sixteen miners were injured when a quake hit the Bielszowice coal mine in southern Poland on Thursday, Reuters has reported, citing the country's commercial broadcaster Radio Zet.

A spokesman for the mine owner PGG was not immediately available for comment, Reuters added.

No injuries or damages were reported, and no tsunami alert was issued

TASS, October 5. Seismologists registered an earthquake of 5.3 magnitude in the area of the Aleutian Islands (US) close to Russia’s Kamchatka Peninsula, a source in the regional branch of the Geophysical Service at the Russian Academy of Sciences told TASS.

No injuries or damages were reported, and no tsunami alert was issued.
Click to expand... 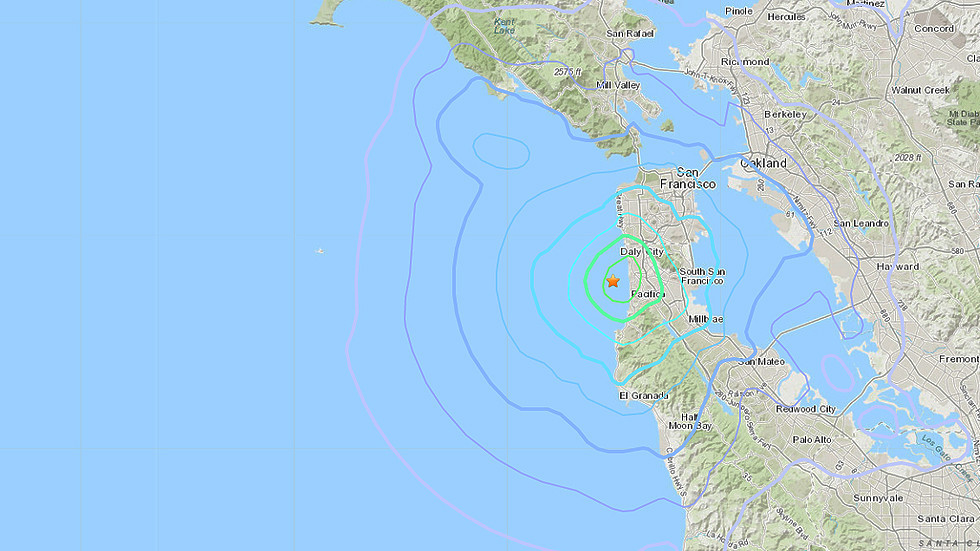 The tremor struck just 6km (3.7 miles) off the coast of Colma, just south of San Francisco, on Saturday morning, according to the US Geological Service. An earthquake of this magnitude is strong enough to cause minor damage, but typically results in only shaking and rattling of objects indoors. 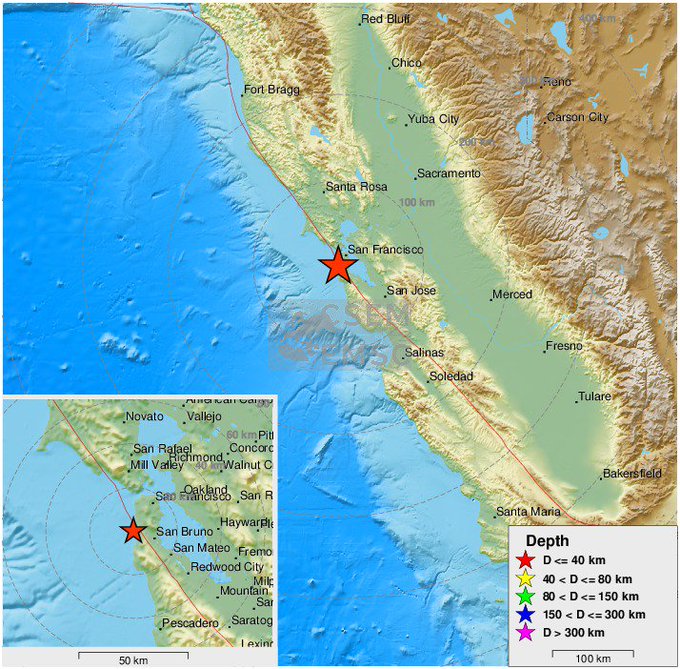 It’s not just the living that were disturbed from their sleep. Colma, the town closest to the epicenter, is home to more than 1.5 million dead bodies. Founded as a necropolis in 1924, the dead outnumber the living in Colma by nearly a thousand to one.
"It can only be the dead rising and the zombie apocalypse starting,” one commenter joked. Another referred to the quake as “a real bone shaker.” 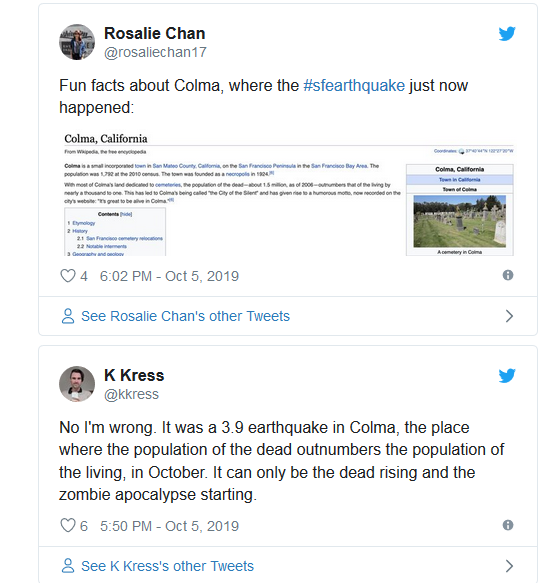 Though Saturday’s quake was relatively minor, California has been hit with a bevy of similar tremors in recent days. At least five quakes registering between 2 and 2.9 magnitude struck the Bay Area on Tuesday, and eight quakes of magnitude 3.0 and higher were recorded further inland near Ridgecrest.

According to some scientists, the San Andreas fault, which passes through San Francisco, is overdue a shake-up. The most devastating earthquake along the fault occurred in 1906 in San Francisco. At least 3,000 people died in the estimated magnitude 7.8 quake and subsequent fires.

Two weeks have again passed since I posted the last screenshot of North America and the picture is pretty much the same. A lot of stress on the East coast and Alaska. A total of 2273 out of 2663 worldwide happened in the pictured area in the last 7 days. That is 85.4%! 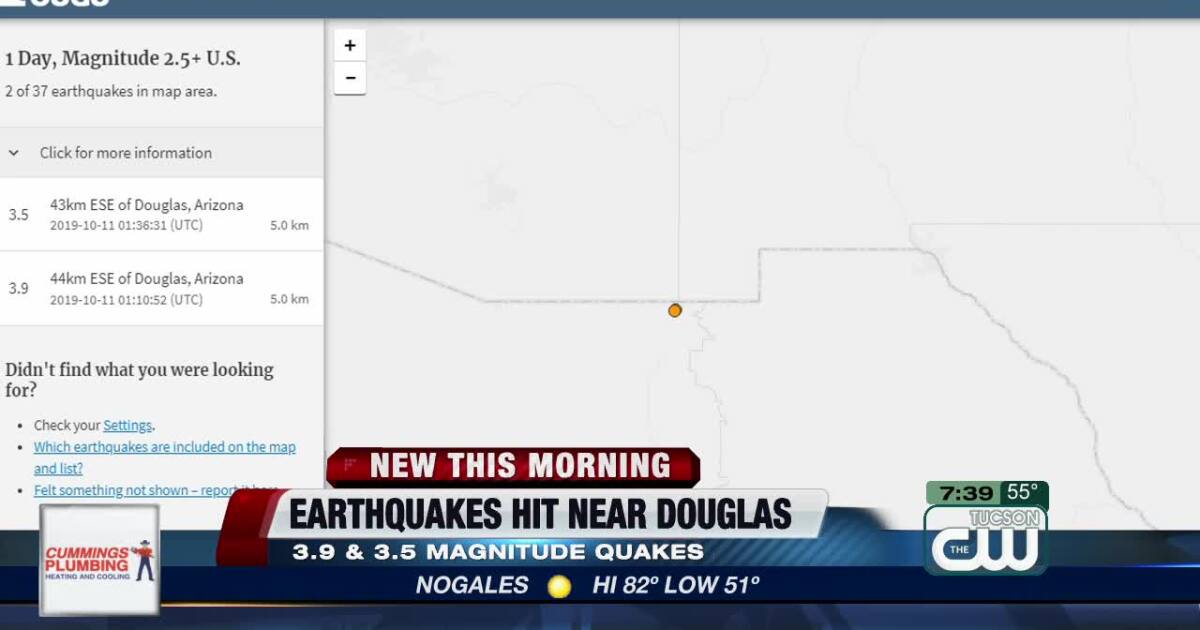 The quakes, at 6:10 and 6:36 p.m. Thursday, originated in Mexico, south of the Arizona-New Mexico border.
No damages or injuries have been reported.

According to the University of Arizona, there are about 100 faults known to be active within Arizona's borders.

An earlier version of this story reported that the earthquakes were at 1:10 and 1:36 a.m. Friday morning. 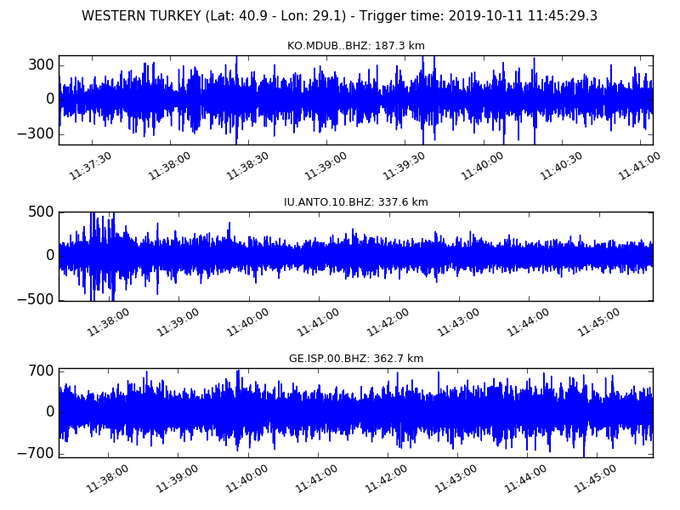 No epicentre or magnitude yet. #Earthquake about 65 min ago confirmed by seismic signal. Probably too small to be located automatically.
Click to expand...

All earthquakes from 1901 to 2000 have been shown. An important work
Click to expand...

A magnitude 5.7 earthquake has struck off the east coast of Japan’s main Honshu island as monster Typhoon Hagibis is set to make landfall in the middle of the country.

Japan’s Meteorological Agency reported that the quake hit at 6.22pm local time and it is not expected to trigger a tsunami. It struck at a depth of 59.6 km and its epicenter is 55 kilometres south southeast of Katsuura in Chiba prefecture, the US Geological Survey reports.


https://twitter.com/i/web/status/1182952824512155648
More than 1.6 million people have already been ordered to evacuate parts of Honshu as Typhoon Hagibis barrels towards the center of Japan.

The violent storm, set to be Japan’s worst in 60 years, has already claimed its first victim as a man was killed when a vehicle toppled over in heavy winds in Chiba, east of Tokyo, NHK News reports.
Click to expand...