Video footage from the scene showed a group of about a dozen, many clad in all-black, repeatedly shouting expletives at the woman while shining lasers into her eyes.
Click to expand...

The group was mad that the woman was wearing what appeared to be a swastika armband.
Click to expand...

Who would wear a swastika armband these days? Probably nobody. And who elected this mob to enforce a dress code?

The article then jump-cuts to a second story about the mob attacking the police department's east precinct.

Police said rioters gathered around 8 p.m. at Floyd Light Park and began walking about an hour later, blocking both lanes of traffic. After arriving at the department’s East Precinct, the mob tried tearing a surveillance camera from the building. Some spray painted the camera and the precinct’s front doors.
Click to expand...

When officers moved to disperse the crowd, rioters hurled projectiles and shot commercial-grade fireworks at them. Officers responded with tear gas and crowd control munitions.
Click to expand...

Rioting has continued on a near-nightly basis in Portland since late May with no signs of slowing down.
Click to expand... 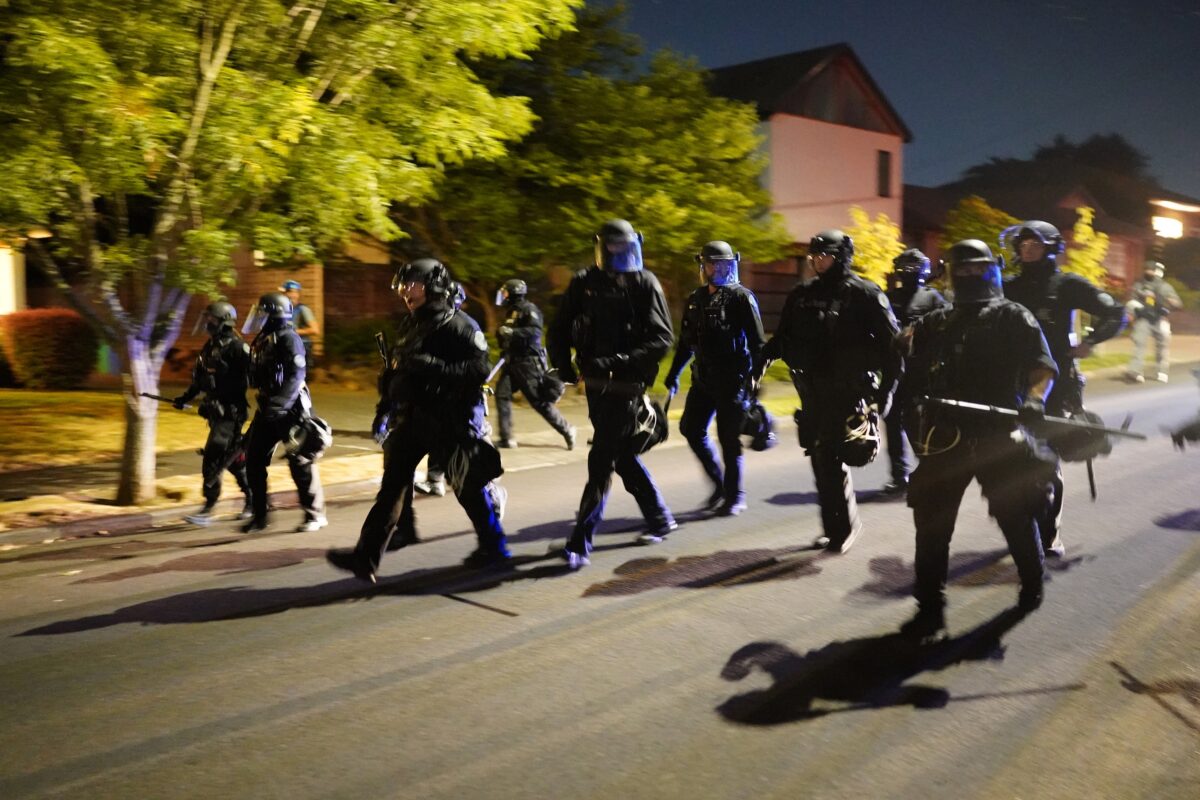 Rioters in Portland confronted a woman at her home late Wednesday as rioting continued in Oregon's largest city ...

FOTCM Member
Here is another report of antifa moving into a residential area. They tried to blind this woman with lasers, just disgusting! Antifa Militants Rove Into Residential Parts of Portland, Assault a Woman at Her Home, Try to Blind Her with Lasers (VIDEO)

www.thegatewaypundit.com
https://twitter.com/i/web/status/1291322964512837633
GOOD for these people in Eugene, Oregon! Lots of video in this article. Not a large crowd on either side. I don't know why the person with the megaphone doesn't move away from this brutish fellow. Either one doesn't want to give up any ground i guess, its like they're glued together. MUST WATCH: Eugene Residents Confront Black Lives Matter Mob, Tell Them to Get the F Out of Their Neighborhood

Eugene residents were not in the mood for the Black Lives Matter mob coming to their neighborhood on Thursday night, and it was awesome. After shouting and taking over the streets in Eugene, Black Lives Matter activists were confronted by patriotic residents who blocked a vehicle that was being...

Portland: Antifa Rioters Shift to Attacking People in Their Homes And in The Streets

The woman was wearing a swastika armband. I don’t care what she was wearing.

The rioters came to her home in middle of the night & assaulted her. They demanded she remove the armband or they would remove it for her. This is after they set fire to the east precinct.
— Andy Ngô (@MrAndyNgo) August 6, 2020
Click to expand...

Wow, maybe she was wearing a swastika armband. [An ancient and important symbol, it's now largely reviled due to its Nazi association.] It's ironic that Antifa doesn't like swastikas as they're modern-day Brownshirts.

The article goes on to give a play-by-play of events last night. Portland: Antifa Rioters Shift to Attacking People in Their Homes And in The Streets

Antifa rioters in Portland moved on to attacking residents in their homes and in the streets after being mostly dispersed from the Portland federal courthouse over the past
www.informationliberation.com


This August 4, 2020 congressional testimony by journalist Andrew Ngô and others sheds some light on Antifa, its operations, goals, ideology, funding, etc.

The 68th day of riots in Portland weren’t without some sparks as rioters attacked a truck driver who attempted to navigate through the street they were occupying. The rioters quickly surrounded the vehicle attempting to trap the motorist and prevent them from leaving the area, with one riot participant attempting to cut him by throwing their motorcycle down in front of the vehicle while another began smashing his windows with a hammer.

The driver, clearly fearing for his life, pressed the pedal to the floor and sped off while dragging the motorcycle underneath his car for a dozen blocks. After he got to a safe distance, with rioters still chasing after him, he exited his vehicle with his gun in hand and gave the rioters a piece of his mind.
Click to expand...

Night 68: Portland Rioters Assault Random Truck Driver Who Drags A Rioter’s Motorcycle Down The Street As He Takes Flight…Then He Drew His Gun And Confronted The Rioters The 68th day of riots in Portland weren’t without some sparks as rioters attacked a truck driver who attempted to navigate...

I lost my breath for a moment - I just read this:

Fed Governor Lael Brainard today unveiled the framework for the Fed's planned instant payment system to provide businesses and households with money at the touch of a button. The system is to be introduced in 2023 or 2024.

Floyd died in police custody at the end of May following an arrest that went viral on social media. A partial clip of the arrest, showing an officer holding his knee over the 46-year-old’s neck for several minutes, sparked national outrage and unrest, including mass protests and acts of vandalism, rioting, and looting.

AG Ellison did not release the bodycam video from the officers involved in the arrest.

On Monday, however, the Daily Mail released leaked footage taken from the body cameras of Officers Thomas Lane, 37, and Alex Kueng, 26, after responding to a call that Floyd was allegedly using counterfeit money at Cup Foods.

As noted by The Daily Wire, the footage shows Floyd acting in an erratic manner that prompts police to question if he is intoxicated and includes Floyd resisting attempts to get him in the back of the police car, citing his “claustrophobia,” “anxiety,” previously having “COVID,” and his difficulty breathing. Floyd eventually begins yelling that he “can’t breathe” and saying he’d prefer to be on the ground than in the car.

“Why haven’t we seen the rest of the video until right now?” questioned the “Tucker Carlson Tonight” host. “The video seems relevant, particularly considering all that has happened next.”

“And the answer to why we haven’t seen it is simply,” Carlson continued, “because Keith Ellison, who’s the attorney-general of Minnesota, hid the video from the public; he refused to release the footage, and he admitted it.” Interestingly, Giuliani is getting trashed in the comments. These folks evidently have not looked into BLM's funding model.

Nucifera said:
Interestingly, Giuliani is getting trashed in the comments. These folks evidently have not looked into BLM's funding model.
Click to expand...

As long as these crazies on the left insist that “protests” are fine no rational person will take them seriously. Hopefully there are enough rational people left.

The right is now a larger tent. The truth is that the left has moved far left and the right has moved toward the center. Only one side allows freedom of thought now and it isn’t the Democrats.

FOTCM Member
This one had me tearing up too. Americans are such kind and giving people.

Not only has my computer been on the blink lately, but the tropical storm that passed through a few days ago left us without internet, unlike a lot of our neighbors who lost power completely, so we were lucky in that respect.

Anyway, just one more of my little anecdotes from the Empire State (New York): actually, these are invariably my husband's anecdotes since he's the one commuting to the city each day from where we live upstate.

Anyway, the other night after coming home he told me he experienced his first "black on white" incident. We had previously discussed what we both should do should someone confront either of us on the street, etc., so in that sense he was prepared. Any case, here's how it went: my husband was in a train station waiting for his very late train given the storm had thrown off the usual train schedule. So, he's standing there, annoyed to have to wait for an additional hour and a half, and a young black man -- maybe twenty years old, wearing all black -- comes up to him, and starts "getting all in his face." He came in real close, and started jerking this way and that, trying to intimidate him. But my husband remained calm, and expressionless, and looked him right in the eye, which sort of threw the guy off his game. Then my husband quietly asked, "What's up?" -- and the guy took off. This dude then tried the same thing on a [white] woman who was also waiting on the platform. He didn't do too well with her, either -- although she didn't remain expressionless. She leaned back and looked at him as if he were nuts.

So, it seems a lot of these young people feel they have to act out in some way. I'm not exactly sure what reaction they are looking for either. Fear maybe.

What's disconcerting is that this guy is maybe just getting started. I mean, when you think about it, going out of your way to mess with people who are just going about their own business is actually a pretty big deal. I mean, would this guy have thought of behaving that way even a few months ago? Probably not.

That's what's disturbing. How this truly pathetic behavior becomes normalized given all the craziness they are witnessing online or on television every single day.

So, in sum: it would seem it's important to stay alert, and remain calm, and in that way hopefully avoid what could potentially become a violent altercation -- maybe not in this particular instance, but who knows what's in store as these things progress. I believe that good old fashioned muggings are on the rise in New York as well, so it's not just this BLM madness, but opportunists seeing the decided idiocy of Mayor de Blasio's new "lax" policies as a free pass, which is very correct of them to assume, in fact.

So... I'll continue to keep you all posted. In the meantime, I need to do something about my computer, it keeps turning off.

Ocean said:
This one had me tearing up too. Americans are such kind and giving people.
Click to expand...

Example of the basically Christian STO humans that the 3D/4DSTS are out to destroy.

Heather said:
What's disconcerting is that this guy is maybe just getting started. I mean, when you think about it, going out of your way to mess with people who are just going about their own business is actually a pretty big deal. I mean, would this guy have thought of behaving that way even a few months ago? Probably not.
Click to expand...

That incident is all but the same of one that was posted in the CV thread - a white masked female SJW and her boyfriend started harassing two no masks white males who were outside getting ready to eat their purchased meal. She threw her coffee in the one guy's face and felt totally justified in doing so. She didn't think physical retaliation by the target was justified at all! Her boyfriend had the audacity to call the police so they could cry assault.

As to the train station incident, what if it's not just one crazy black male but two or more together up in your face? It'd be tough to just stand there calm and steady. And who's to say such agitators won't have a gun or a knife? With law and order being dismantled and extreme race hatred being hyped to the hilt, staying safe is going to be less and less possible.