I find it hard to imagine what life would be like without self-made or mechanical suffering. But I've been at periods in life where there is more flow and less suffering. So if you work out your programs and gain an understanding of yourself, I think you could get to that point. There will always be accidents or things external that come upon you, but you'd have eliminated your self suffering through knowledge.

But maybe it's not so hard to imagine. Without that suffering, you'd just get on with life and continue pursuing your Aim(s). And on to new and more complex things. So I kind of see this type of suffering as a sort of obstacle, that you overcome after some time and learning.
Click to expand...

I agree - we have to remember that the suffering is like the fire used to cook a meal. Once the meal is cooked then it's time to prepare the meal and dining room for guests, and at that point we are more focused on serving others. And, since that is another stage entirely, it is also an entirely new challenge. The point being that without the heat we cannot prepare the 'meal' at all, and there is an entire celebration waiting for us at dinner!

But what is being 'cooked'? Well Dabrowski would say that it's our real personality - that through suffering we develop the values that will spur us to DO rather than simply react to everything. Then our real work begins. It could be connections to a different thought center, to our higher selves, where we find commitment to a higher cause through the deep grief caused by learning the truth of who we really are, and then what the world is really like. And as we move through that process we come into greater and deeper contact with others on the same path, and an entire 'banquet' comes into existence.

But what about those who make us suffer for their own sadistic reasons? Well it seems that suffering functions as a form of payment. We must suffer in order to pay off our debts, and there are those who make us suffer in order to feed off of that energy and keep us 'enslaved'. Either way there's no getting around it. We either suffer the depredations of the sadistic weirdos out there or we learn to take our suffering into our own hands and pay for a different future. As the C's said in the April 16th Session, we either pass through the 'Valley of the Shadow' or we walk off a cliff.

Evil is real on its own level, and the task of man is to navigate the cosmic maze without being defiled by the Evil therein. This is the root of Free Will. Man faces a predicament as real as himself: he is forced to choose—to utilize his knowledge by applying it—between the straight path which leads to Being, and the crooked paths which lead to Non-Being. Human beings are required to discern between good and evil—consciousness energy directors—at every stage of their existence in this reality. Because, in fact, they must understand that God is consciousness and God is matter. God is good, and God is evil. The Creation assumes all the different properties of the many “Names of God”. The Cosmos is full of Life-Giving and Slaying, Forgiveness and Vengeance, Exaltation and Abasement, Guidance and Deception. To attempt to assume God’s point of view and “mix everything” at this level, results only in staying at this level. Therefore, human beings must always separate God’s point of view from their own point of view and the fact that all creation assumes the divine Names and Traits.
Click to expand...

On recapping on this very important thread a thought occurred to me on a possible way to help make more conscious decisions and choices?
Inherently we may lean to STO or STS choices or mostly in between, because context has to be included here too. However sometimes an active part can be missing. ie not having the prior experience or not remembering/taking on board the lesson from a previous experience. Networking obviously comes in as very important here before making such a decision especially where some doubt is niggling in the background. Again, a warning in itself possibly from an intuition point of view.

The extra help could be the impression and feeling you receive about this decision - perhaps it is a new direction, project, being at a crossroads in life.

This is where, having taken all the above into consideration, including current level of knowledge and books such as Thinking Fast and Slow etc. What could help too is the quote above. The 100 names of God. Especially if a quick decision has to be made (though I try to steer clear of such where possible for the 'traps' that they could be, but there are emergency situations regardless). So if the choice cannot be described by one of the nobler names of God, or even a positive side to the baser names, then perhaps that is a quick marker, another guiding hand, so to speak, to help make a better conscious choice. (Perhaps also bringing in the awareness of conscience at the same time)?

Asking DCM and the C's for Knowledge during the choice process can also bring 'signs' you need, hopefully in 'time'. However, intuition and discernment for these 'signs' also has to be taken into consideration to prevent 'wishful thinking' finding signs that 'fit' a possible negative decision later to be regretted. I think this would be more likely in a decision of a more personal nature than one that is obviously helping others.

Obviously a very important aspect of the Work is to be as aware continuously as possible, tuned in to DCM in every action via every centre - centre of gravity.

Thus practising all the above should help us steer away from personal suffering more effectively especially as those that we CAN control are usually down to 'bad' choices and decisions are they not? That is why Knowledge Protects too on another level. Only when applied of course! Just in the course of 24 hours we are open to making many decisions - basic routine ones to going about 'business' outside, to conversing with others. It is amazing to note from the moment of waking just how many decisions are made practically every second/minute! Any simple one could have a tripping up effect that could manifest into something 'unexpected' thus vigilance and awareness really are key. This can be a fun exercise devoid of any paranoia.

A four-year-old girl walked some eight kilometers across the bear- and wolf-infested Siberian taiga to seek help for her grandmother.

The incident took place in the Russian Republic of Tuva in southern Siberia back in February, but was confirmed by the authorities only on Sunday.

The four-year-old girl, identified by local media as Saglana, was living with her grandparents in a remote village. Her grandfather has reportedly been blind for several years, and the girl’s 31-year-old mother lives separately.

One early morning, the Saglana woke up and saw her grandmother motionless. She had to seek help in the nearby town, some eight kilometers away, according to local media. 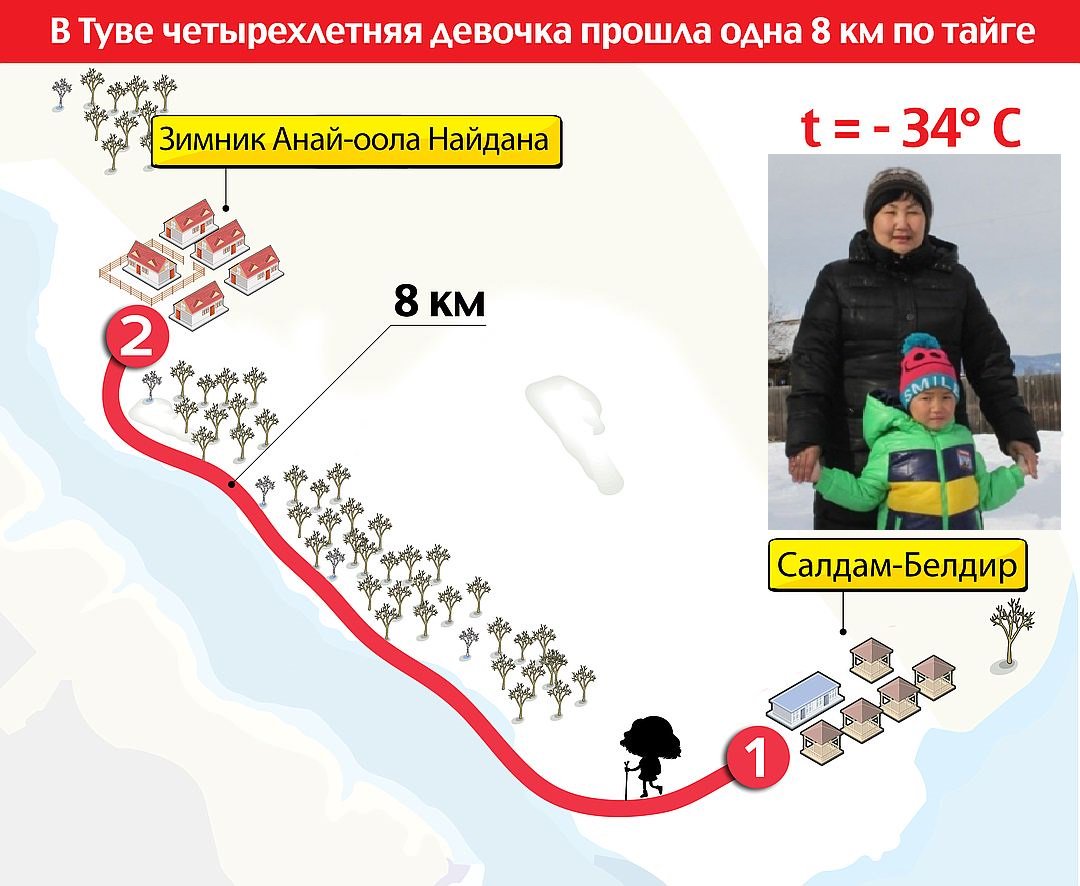 The problem was, she had to walk through the snowy taiga forest on a crispy early morning to get there.

Despite all the dangers of trek through a Siberian woodland notorious for its wolves and bears, she reached her destination in a few hours. The medics who examined the girl after she arrived said she was suffering from “general hypothermia,” according to a police statement.

Unfortunately, the medics who went to help the girl’s grandmother, couldn’t save her. The woman in her 60s had died of heart attack.

People on social media praised the girl for her bravery.

“The future of our [district] lies with these small heroes,”
Click to expand...

Others wondered how the child’s grandpa could have let her make the trip and why the family didn’t have mobile phones.

In the meantime, the local branch of the Russian Investigative Committee has opened a case against the girl’s mother, suspecting her of dangerous negligence.

“She knew that the elderly people were unable to ensure the safety of the child,”
Click to expand...

Being a Russian isn't a nationality, but a way of life. Her soul is pure.
Click to expand...

Ambassador
FOTCM Member
This is absolutely amazing, thank you for sharing, c.a.. Very unfortunate that this girl lost her grandmother, and I hope that there will be an optimal solution to her and her grandfather's situation.

Keit said:
This is absolutely amazing, thank you for sharing, c.a.. Very unfortunate that this girl lost her grandmother, and I hope that there will be an optimal solution to her and her grandfather's situation.
Click to expand...

I think that this thread, (and it's responses), is reminder that we "all" will be tested with similar but very different challenges, that will gauge the quality of our souls potential.

The passage, is a great reminder of the opportunity of making the ether of incremental steps. And or the capacity of giant leaps, for emotional, and spiritual advancement. .

I guess it could be said, that it's always been a daily opportunity of choice.

Thanks for sharing this. Very touching, and very true I think.

Thanks for sharing this. Very touching, and very true I think.
Click to expand...

Agree the guy has soul. And your welcome Mikey!
M

Thanks for sharing my friend.Indeed THE MOST BEAUTIFUL THINGS IN LIFE DOES NOT COST ANYTHING:Two months ago i was in Peru with my father and i really enjoy to talk with him about his life and what it mean for him to losing my mother.Just to be in his company was more than gold.
To enjoy the tenderness and care of my older sisters and my niece and to talk honestly about matters that we did not talk about before was very healthy for our souls.I'm incredibly grateful for those moments