I have been pondering for an hour about this photo (and earlier felt drawn to it several times… wondering, what it is that doesn’t add up)

I have tried to check with various “forensic” tools on the internet in an attemp to scutinize if an image has been tampered with… but my skills are small in terms of how to interpret those tools.

Now that i took a break, sitting on my way to work, looking at it again… my senses constantly gets drawn to an area, the vague shadow below the “spacecraft” (the shadow area of a small cloud i am assuming being in front of the ”spacecraft”).

Here is the thing; if a strong light source radiates its light outwards, then a smaller cloud in front of it, should cast a much stronger shadow. But in this photo it is transparent ghostly and let’s you see the stripy cloud behind. And that does not fit together.

Since this seems to be a motorola type of mobile phone (or sensor related, I don’t know but is indicated in one of the “forensic” tools checking file info). The image does not indicate any longtime shutter speed has been used (longtime exposures / shutter speed would favor ghostly artifacs/details especially in combination with lightning with moving clouds)

So it likely must been a short exposure and therefore there should be no ghostly transparent cloud sections in the image.

(There is curiously no photo exif data present in the file - something all cameras and mobile phones produce unless you open it in photoshop and then save it without exif info).

Again: look at the upper rim of the cloud which is sharply outlined and dark (opaque) in front of that bright light. Here the cloud appears dense enough to appear darker. But when you look below, you see “though” that cloud all of the sudden, only indicated as a faint shadow. And that makes no sense !! It should be opaque, not almost entirely transparent.

These are my 3D photography thoughts to the image. I do not claim to know, but rather offers an alternative angle. To be honest if one wants to fake an image like that, it is pretty easy with something bright against a darker background such as clouds.

You put on top an image layer over the scenery, a lightning bolt for example, set it in photoshop into “lighten” or “screen” mode, it then only copies in the highlights but not the shadows. Then use a blurry eraser brush to eliminate any harsh transitions so that the added (bright) detail “melts into” the surrounding cloud landscape

2) the “windows” in that alleged spacecraft looks weird to me. While the image itself shows very sharp details of the city, the windows remind me of a digital filter (Topaz Sharpen AI software or Gigapixels) i often use in my scanned images in order to tame noise from analog negatives, or to enhance a low resolution image. It creates an impression of sharper details but in a typical “consumer AI” way when you look really close. Where the finest details often don’t get really straight lines, but rather look “wobbly”.

Nienna said:
Do you have a link for this photo?
Click to expand...

FOTCM Member
https://twitter.com/i/web/status/1534049324916776962
Even if it is hot at a certain altitude there are negative temperatures. Thanks to this thermal gradient, clouds are formed and if they rise a lot, the water droplets freeze. Ice crystals refract light and can cause iridescence like those seen in India.

I did not know this atmospheric phenomenon.

Thanks for the accompanying explanation.

FOTCM Member
Strange phenomenon recorded from the skies of Tunez 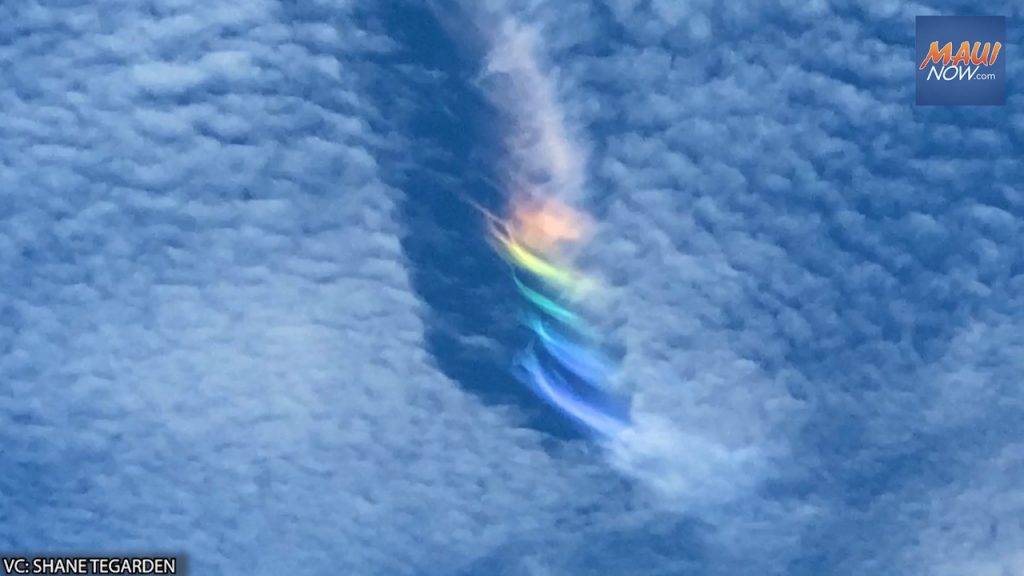 An unusual rainbow cloud formation was captured in video above Ukumehame, Maui on Thursday afternoon.

A fallstreak hole (also known as a cavum,[1] hole punch cloud, punch hole cloud, skypunch, cloud canal or cloud hole) is a large gap, usually circular or elliptical, that can appear in cirrocumulus or altocumulus clouds. The holes are caused by supercooled water in the clouds suddenly evaporating, and may be triggered by passing aircraft. Wikipedia
Click to expand...

Yesterday when I was driving I saw a very strange cloud.

It was in the form of a perfect pyramid except for the right side that its lower side was covered by another cloud. The strange thing is that at the top of the pyramid there was a perfect circle of light. The light came from the sun that was behind the cloud.

I showed it to my family and they were all very amazed.

I have looked for something similar on the internet and the following image is close to the cloud was.

But the weirdest cloud I saw many years ago was a swastika cloud drawn in the Indian/Buddhist manner. Again it was not an approximation, but a perfect cross with all its angles in the cloud.

I have thought for a while whether to share this experience of yesterday or not with you, since lately I am not a big fan of pyramid shapes because of the obvious relationship with certain "people", but it was certainly something surprising.View attachment line-symbol-pyramid-with-sun-vector.jpg

It was pretty dark already, and while i was smoking at the balcony in Stockholm... I saw a weak kind of round-oval ring-shaped ...something... in the sky. It was so weak to see, that i needed a camera in order to collect more light and see what it was...

In a photo however, the cloud looked quite odd, like a jellyfish. It lingered around there for 5-10 minutes slowly drifting towards north, according with the general winds that evening. (It was so dark, that you didn't really see any colors with the naked eye) I asked Sal and Leti to come to the balcony, but they didn't even see anything until I pointed it out.

Apparently the cloud type is called "volutus", or roll clouds.

in the link, there is a video clip from a rather ominous looking volutus / roll clouds in Brazil, Rio de Janeiro in 2019. Supposedly it was 623 miles long. 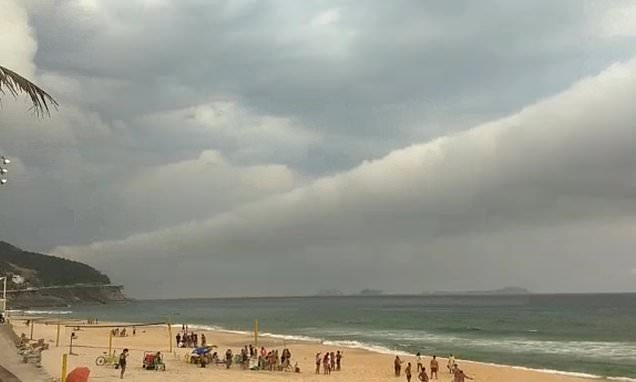 Jorge Ricardo, who was spending the day at the Sao Conrado beach with his son, was transfixed and recorded the 624 mile long apocalyptic vision.

FOTCM Member
Two days ago, before the Queen's death.

Impressive storm arrival in the UK.