19°C / 66°F Cool, overcast, rain-less 'end of summer'-day. Sunrise began normally with clear skies. Then in just minutes a thick mist descended with 200-feet visibility and it got cold. So I had to take some winter-clothes and arrived to fasted-sprint exercise in the countryside by ~6:40am.

Skies remained a thick white overcast, you could guess the sun up somewhere by the dim white glow. The mist made everything soggy. My clothes stuck with the amazing wet-cold feeling, as if I was hugging a big wet cold frog. Unfortunately the wind picked up and my ribs started to ache, my body telling me "You'll get a cold in these soggy clothes in the wind!" By 8:40 the mist started to break up out there in the countryside, but still remained.
Arriving back into the city - decidedly warmer - I saw with surprise that the mist had already disappeared from there.
Last edited: Aug 28, 2021

Cold Morning outside of Stockholm
4 September 2021

The sky is stunningly clear blue - but the air also very fresh. The temperatures went down 0°C in some places in the wider area of Stockholm, such as Eskilstuna with -0.2°C (31.64°F), and Tullinge with +0.5°C (32.9°F) - a station which lies 7 km SW from my place south of Stockholm. The weather service has already indicated a drop to 0° during the upcoming night...

I checked through the temperatures for the station Tullinge - and it must be empathized, that it is known to be a "cold hole". I see it a little bit like a canary bird in the coal mine. Now and then, you can get frost in the very end of August - but at the same time, it really only happens now and then, perhaps 1-2x during a decade. Still, i find it rather cold for this time of the year. Daytime temperatures are around 14-15°C. - which is 3°C below normal. The first treetops cloe to my balcony, have started to shift into yellow-red. Also a bit early, I feel from memory.

The charts below:
the first to the left - shows the temperatures in °C. this morning at 07.30 (which are not minimum), while the right chart shows the Minima for the middle area of Sweden, called "Svealand"

FOTCM Member
After the passage of Hurricane Grace, the days have been rainy here in the Toluca Valley and have been more dangerous. In fact we have seen landslides, sinkholes and human losses in recent days. The town located 1 km away from where I live was flooded by torrential rains.

Given the recent torrential rains, the authorities have recommended raising precautions for possible floods

Administrator
Moderator
FOTCM Member
This evening, in the streets of Agen, Southwest France, there is more than 1 meter (3 ft) of water. 140 mm (6 in) of rain fell in 2 hours. That's the record since the creation of the local weather station in 1941.

FOTCM Member
The weather has been apocalyptic in recent days. The heavy rains caused flooding in 19 neighborhoods and roads in the municipality of Ecatepec, State of Mexico, where two people have already died.

During yesterday's earthquake, the inhabitants of Mexico City saw in the night sky a light show produced by crystals in the subsoil that release electrical charges according to the authorities. Today has been a mostly cloudy day and a temperature of 17°C and more rains are forecast.

FOTCM Member
Well, it was a 100 the day before yesterday and now we’ve got a red a flag warning with dry lightening coming in — already heard some rumblings. Fortunately there’s been a bit of rain, so fingers crossed no fires start 😬 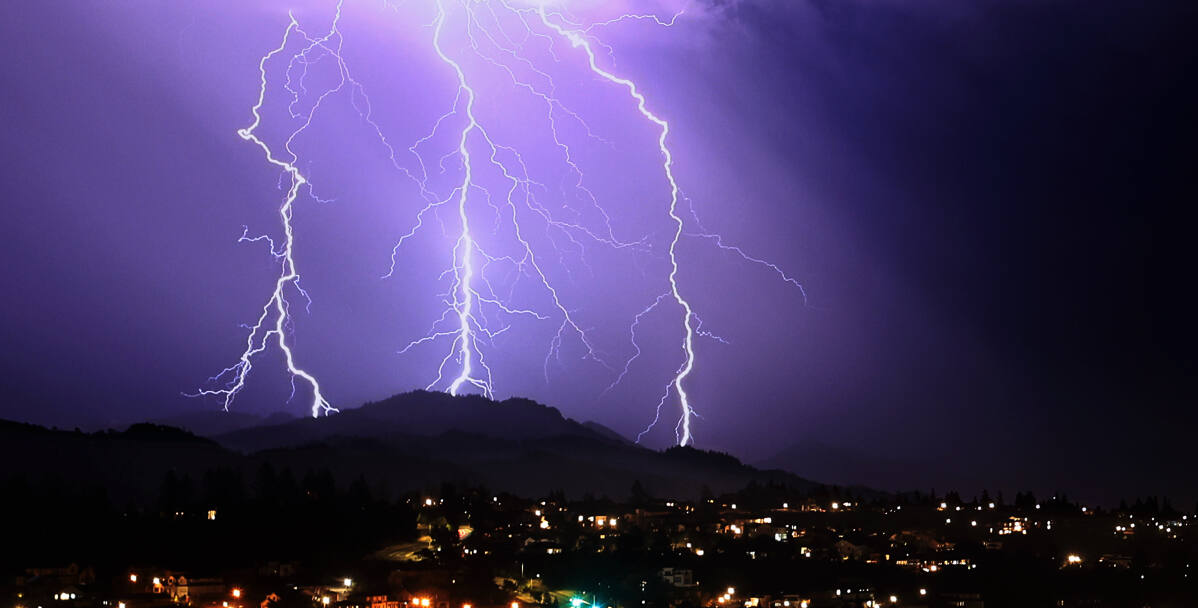 Lightning developed in the Santa Rosa area just before 9 p.m. Thursday, kicking off a weather event that led to extra precautions by firefighters.

The front moving in to the North Bay was taking shape west of Big Sur in the Pacific Ocean and will head inland to the northeast.

“That should be making a bee line toward the greater Bay Area,” Walbrun said. “The ingredients are in place for it to blossom” Thursday evening.

I was really startled this morning, as I went off work around 06.00 - and even in the inner city it felt freezing cold. The wooden panels above the subway electricity grid / rail - were covered with glittering frost.

What puzzled me was, that the outer suburbs of Stockholm had freezing temperatures ranging from 0° (32°F) at Bromma City Airport to -2.4° (27.6°F) in Tullinge (7km from my place) to -2.5°C (27.5°F) in Svanberga, the latter is a station located 85 km NE of Stockholm. In all - that station was the second coldest place in the entire country. (You would assume that it is very cold in the extreme north this time of the year... and wouldn't expect the Stockholm area to be one of the coldest places - at least not now in September) Only one station reported lower temperatures: Tarfala high up in the north, with -4.5°C (23.9°F) being colder than Stockholm. But that's a mountain hut located at 1000+ meter.

I notice however, that on 20 Sep 2019 - we had similar frost events - because i took a photo where frost covered cars in the suburbs of Stockholm. And on 23 Sep 2019, Stockholm-Arlanda Airport (43 km north of the city) reported -3.5°C, and Tullinge -2.4°C. Frost was still visible in the morning after sunrise.

I don't consider that to be particularly normal for a third week into September... Earlier events I do not remember. No wait, I do... one time; on 30 Sep 2001 (last image), when near the inner city of Stockholm (Enskede), the cars windows where covered with considerable frost/ice

The average MIN for Stockholm City this time of the year is somewhere around +9°C (21 Sep), for the suburbs 1-1.5°C Celsius lower.

In Alaska, we have our first snow. It is unusual as it is about 3 weeks ahead of the average first snow, and it has been warmer than usual.

So, most of the leaves are still on the trees, and are slumping from the weight of the snow, and the power is out.

It's about 38°F and sunny, so it should melt fast as there is only a little over an inch of accumulation.
H

Northern Adriatic, Bay of Kvarner - we had pretty much usual summer and now beginning of autumn (maybe a little bit early though). Shortly after mid August rain started almost every other day and ended high summer temperatures (which were not above 35°C for the month before that).
This week temperatures dropped noticeably, with low 20s°C during the day and even close to 10°C during the night, which prompted thinking to start heating, a bit earlier than last year (1st half of October).

FOTCM Member
Quite a cold morning the other day with the temp reading 36F feels like 32F - unusual for our area of Northern California this early in Fall.

Also worth noting this year it’s been raining acorns since late August! Our oak trees are dropping hundreds of acorns - squirrels are loving. Never has happened like this until this year.

Only other time I can recall something similar was waking up to it raining redwood seeds. I didn’t know until later in morning that the Napa earthquake (2014) had occurred.

The seasonal timing is the same but no earthquake - yet, but all things considered in regards to the turbulence Earth seems to be experiencing something is definitely up 🤔

Anyone else experiencing trees “raining” seeds?

Ambassador
FOTCM Member
@maxwell1110 Yes, my oak trees are raining acorns! More than I've seen since moving to this property 4 years ago. In fact, during a rain storm one evening, I thought it was large hail, turns out it was acorns!

I also have walnut trees that are loaded this year. My friend told me when the nut trees are loaded, it means a very cold winter is coming.

Administrator
Moderator
FOTCM Member
Well, it is forecast to go down to 3 C tonight in SW France. A bit early for it to be that cool. But the temps have been dropping steadily at night for a couple of weeks now.

Lilou said:
I also have walnut trees that are loaded this year. My friend told me when the nut trees are loaded, it means a very cold winter is coming.
Click to expand...

Same here in Siberia. This season we have the rowan trees loaded with berries. According to the local observations, it is a sign of a harsh winter. People believe that the nature is preparing more food for birds and animals so that they could withstand very low temperatures. We'll see how it goes soon.

In Alaska, we have 3-4 inches of snow. It is timely as Oct. 12 is the average first snow. We had a freak-snowfall in the middle of Sept. and that snow melted.
The temps are high at around 40°F - dipping to the freezing range at night, so the snow is wet and heavy.

Lilou said:
I also have walnut trees that are loaded this year. My friend told me when the nut trees are loaded, it means a very cold winter is coming
Click to expand...

Apparently when trees “go nuts” with nuts it’s called a mast year. This article seemed to have balance take. And while it’s uncertain among scientists that it’s an indication of a harsher winter, it certainly seems to the case this year:

Julie Geiss uses both folklore and science to make a winter weather prediction. Learn more about her observations and what kind of winter she anticipates.
www.farmanddairy.com

Some years it is lean, and then every 2-5 years there is a boom in production referred to as “mast year.” In a high-yield mast year, a large oak tree can drop 10,000 acorns. During a mast year, food is more easily available for forest foragers, and their populations increase.
Click to expand...