It's been 3/4 days now that the temperatures are very high on the French Riviera, 38/40° is very hot especially at the seaside...
And at night they are always 28°, it's a heat wave...
It's the first year I don't have air conditioning, fortunately the fans are still working...
I spray water on my little Yorks and me with a spray bottle and the cats with a washcloth...
It should not last very long but it is tiring...

Same here in west Wales. It feels like early autumn already, temps are about 17C today, I wore a jacket to go out today. A month ago it was 30C, so there's been a real drop off.

I know what you mean!!! Here in the west Germany is 15 degrees with rain and cold wind! Pure autumn weather!! And is going for 12 in the night….
I‘m hoping for this 26 degrees prognosed for he weekend….

This morning around 7:30 am it is a little less than 13 degrees centigrade right on the outside of the back door (so likely even colder away from the house). In midsummer!

In Alaska, the weather is cloudy, and occasional rain. The temp is 65°F for the high. It is comfortable as there is no wind.

The weather situation in Sweden, has become a bit complicated over middle Sweden and Southern "Norrland", as a cylone is circling our area without moving much. The large rainfall areas, have dumped already a whopping 161.6 mm rain within 24 hours in a town called Gävle, approx. 200 km NW from Stockholm. (We had rainy weather in Stockholm, all day long until evening, as well this morning, as the rain band is re-circling back into our area - but no large amounts from what I can see)

This chart shows the highest amounts of 24 hour rainfalls over Sweden, by SMHI.

In some middle Swedish areas flood warnings have been issued. MAX temperature for today in Stockholm is predicted to go to a mere 14°C / 57°F, way below the normal max this time of the year, which is (21°C / 70°F).

The cyclone "Luciano" centered over Sweden & Scandinavia, is responsible for the bad and cool weather over Western and Central Europe and part of east Europe. Including the earlier, severe thunderstorms over the Alps / Austria, with more flooding.

The large raincloud band from the cyclone, it's marked cut off threshold crossed Stockholm in the evening, making the rain stop - while one part of the sky cleared up with deep blue sky, while the other parts showed mammatus clouds for at least 1-1.5 hours, which I felt was interesting. (However, there were no thunderstorms, to which mammatus clouds usually are associated to). I'll show you a couple of images, to give you an impression of how the scenery looked like from my balcony in the southern suburbs of Stockholm. I think the unusual appearance of clouds has to do with the compact, abrupt cut, entire cloud front from the cyclonic system (see above satellite image). It looks like if a large thunderstorm clouds moved by, but as I said earlier - there where no t-storms.

~25°C / 77°F cooldown in Eastern Hungary. Heatwave on pause with moderate amounts of rain. Our poor Artesian well died two weeks ago in the heat. Now it began trickling drops of water.

FOTCM Member
The National Water Commission announced that Grace continues its journey through the Yucatan Peninsula as a tropical storm, but when it re-enters the waters of the Gulf of Mexico, after also passing over Campeche, it is very likely that it will intensify and return to reach hurricane category again.

Grace will enter Mexican territory again this weekend as a tropical storm. It is very possible that it will affect the place where I live with torrential rains.

Sudden thundery rain showers - therefore the temperature, fell from normal 20°C./68°F to only 13-14°C / 56-57°F - in the southern suburbs of Stockholm during late afternoon (16.00 and onwards), which makes it feel pretty fresh, to say the least. Yet, waking up to thunderstorms was fun and unexpected, because our T-storm season is practically over... There might be "one event in September" you'll notice, but then that's about it.

Sometimes in the end of September, early October, while you have clear cold air residing over the lands - you can spot flares from distant T-storms over the (relative) warm Baltic Sea sea, hovering like little mushrooms at 150-200 km distance.

FOTCM Member
Today the Toluca Valley was sunny, but it is the calm before Grace arrives as a tropical storm here where I live. Grace is currently in the Gulf of Mexico as a Category 3 hurricane and the state of Veracruz will be in the eye of the hurricane in about three hours. Maximum alert to the entire central and northern coast of Veracruz!

FOTCM Member
We are getting some good rain almost every day. Warm, but not too hot, whereas usually over 100F about now. Things are lush and the crops look good. Eastern NC. OTOH, it is coming into hurricane season and we don't need a lot more rain when the ground is already moist enough. I was thinking the other day about the dams up river from here in the bigger cities, and how we are vulnerable when the wealthier Triangle area protects itself from flooding.

Ambassador
FOTCM Member
Between the Rockies and the Purcell's - for most of August, it has been wet, cold (down to below 10 C at night and a few days barely reaching 18 C - feels like early June or late September. It is 15 C here this afternoon.

On August 17th, after pouring rain hard the day and nigh before, and continuing that morning, found myself driving through Alberta at the town of Canmore. The shy was heavy in clouds and it was still raining hard. Among the mountains and low hung clouds, could suddenly see snow. It was reported in this article in an area just down the road and a bit south: 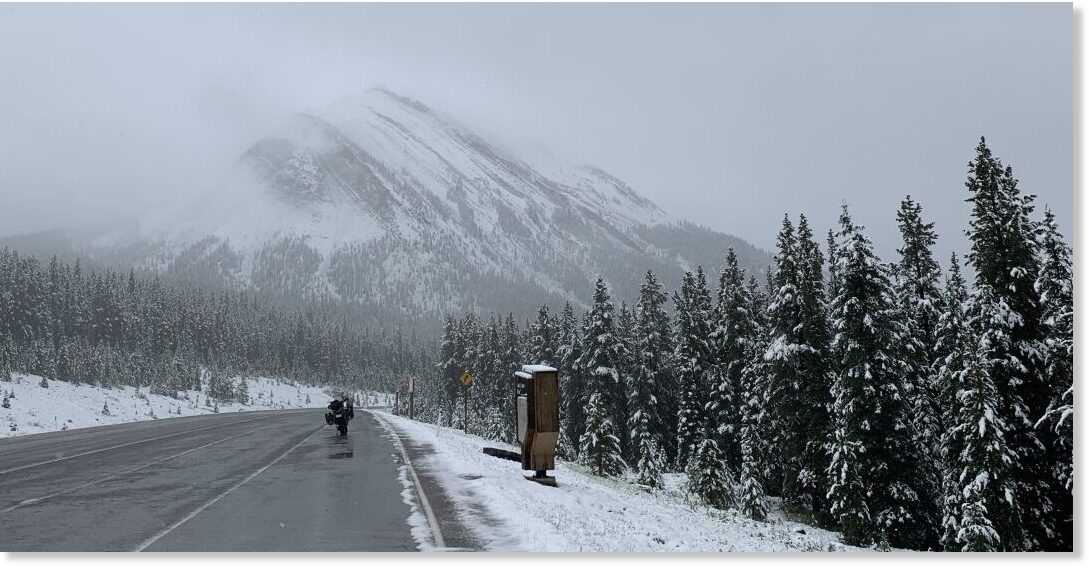 In most places, August usually means sunshine and warm temperatures; however, Alberta's weather can be a bit of a wild card. The province lived up to its reputation on Tuesday, when the Kananaskis region experienced snow. Locals took to social...

Here is a photo taken that evening while back in BC (again it is August 17th):

On the same day, 230 km. west as the crow flies, wildfires were continuing: 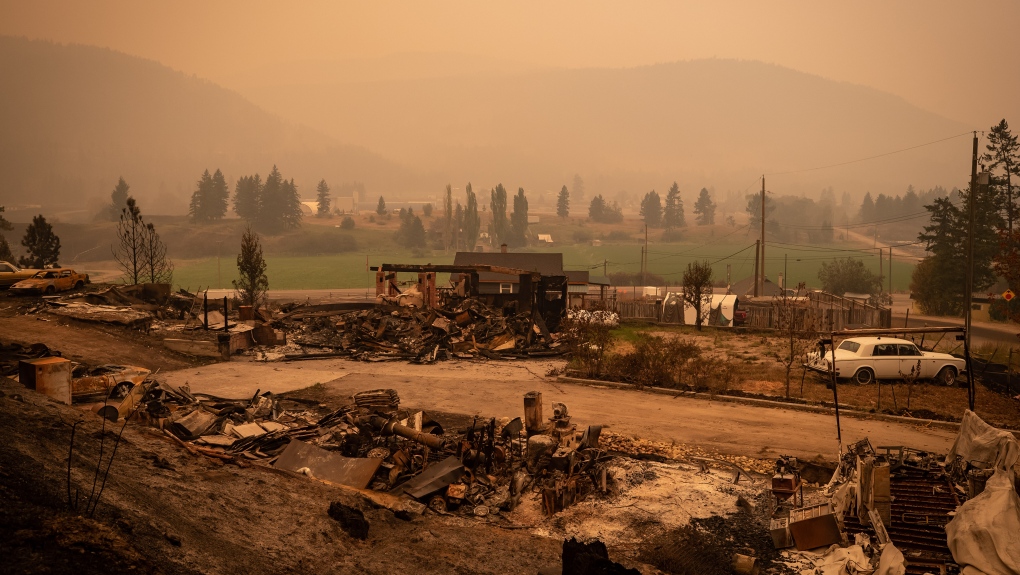 British Columbia saw a significant jump in wildfire evacuation alerts Monday, with 6,707 more properties being added to the list.

The snow above now is largely gone, yet that was more than a dusting. The snow line seems to start around 1700 meters. That morning it was 6 C down low in the valley.

So indeed, July was hot, including that short temp spike to 45 C with no precipitation - and was generally more like August weather. The weather now, in August, seems disrupted, pocketed and cold, again, like the end of September. The fields and grasses are green and not parched as mid August often denotes.

As always, when wildfires hit areas that are populated - areas that have historically been predisposed to wildfires based on desert-like qualities; grasses and forest fuels impacted by temp, winds and lightning, it is a bad situation.

Going forward, at least here at home, wildfire season ended August 1st and it would take some wild swings to bring it back. Early September typically sees snow remaining on the mountains and building, so will have to see what plays out this year.

FWIW, here is the Farmers Almanac look-ahead at winter 21/22 for Canada.

FOTCM Member
In my region in the Eastern German state of Saxony it has been pouring down all night. And much of the state (39 administrative districts) has been set on red alert. Cellars have been overflooded, underpasses inundated and streets closed down. It has been reported in local media that 2 month's worth of August rain had come down in just a few hours. Unfortunately, haven't found a video yet, so can't post this in the Earth Changes video thread.

Overall, it has been much of an "April summer" almost since its start. There has been heat back in June, but we had a cloudy July most of the time over that month, interspersed with a few warm and sunny days, and August seems to be even more cloudier, rainier and colder. I've seen temperatures ranging from around 16°C to around 24° C over the course of last week which largely had the feel of autumn in it, with all the cloudy darkness and the rain. Some of the nights have been so cold that I had to use my hot water bottle again for keeping my feet warm and wore a cardigan while sleeping.

FOTCM Member
Our weather in NorCal has quite the wild range starting with last weekend (all degrees in Fahrenheit). Forecast said low 90s but was only upper 70s then Mon/Tues low 90s and muggy.

Smoke from the northern fires came and I think it triggered a lot of people’s PTSD. All those positive ions and negatively aligned people make HKS/FRV ratio high — both our “spidey” has been triggered since Wednesday. Maybe the wave rolled through?

Finally this weekend the mornings have been foggy/overcast and damp and a very cool wind in the afternoon.

Overall, we’ve also noted the oak leaves falling and the feeling that fall has arrived early. For instance all our kiwi tree leaves started falling off mid-august.

Sense lots of change on the horizon…