Lower Austria, Southern part.
We had a very nice autumn time, sunny days, no rain, wonderful colors on the trees. But unfortunately this lead to a wildfire near (25 km distance) the place I am living. I dont smell anything because there are some mountains around me.

Since 4-5 days there is a fire on one flank of a mountain. They try to get it down but due to very unhandsome conditions (slope) it is hard for them. And also the wind is blowing very heavy sometimes. Yesterday I heard from a friend who is living close to that area that not the trees themselves are burning but only their roots.

They say that it is the largest forest fire that ever occurred in Austria. Until now no peoples homes are in danger. The reason for the fire is supposed to be some cigarette or campfire.

Hopefully they will get it down because it seems that there will be no rain in the next days . . .

FOTCM Member
The days have been very cold lately. Without a doubt these days are a warning of the winter that is approaching us.

In the Toluca Valley the seventh cold front is recorded, we have a minimum temperature of 2 to 4 ° Celsius and a maximum of 20 to 22 ° Celsius. The National Meteorological Service (SMN) warned the population, not only of a sharp drop in temperatures, since this weather phenomenon will also cause very heavy rains accompanied by electrical discharges mainly in the north of the Mexican Republic.

Severe floods with eartslides in Sarajevo, BIH, the land of my dreams, when I was a child, just hope, it will not be like 2014, when, after one week heavy rainfalls, whole land ended under water .

In Alaska, it is snowing with about 10-12 inches of accumulation. It is about 25°F. Only day before yesterday, the lakes were unfrozen - that changed with drop in temp.
There was a storm warning on the TV for SE Alaska, so they might experience heavy snow/rain.

naorma said:
Since 4-5 days there is a fire on one flank of a mountain. They try to get it down but due to very unhandsome conditions (slope) it is hard for them. And also the wind is blowing very heavy sometimes. Yesterday I heard from a friend who is living close to that area that not the trees themselves are burning but only their roots.
Click to expand...

Hopefully since you wrote, things have settled. This article here had maps and video on it, too.

From appearances, what you said seems to bear. White smoke, on the ground, and it was not aggressive looking. Often, fire being on a mountain, although difficult to action (hard for them you said), can be its own form of containment. People can also action it from below and by flanks without more risky head positions, while keeping fire from spreading downslope is more likely in many conditions, too, plus it is fall and the forest appears mixed conifer/deciduous (there are valley homes).


naorma said:
Hopefully they will get it down because it seems that there will be no rain in the next days
Click to expand...

Back at the end of the month, it said the fire was at 115 ha., with 500 people out to help, including aircraft water tanker support, so conditions looked favourable.

Let us know how it worked out, and hope conditions did remain favourable to put it out.

FOTCM Member
This fall period has been a little warmer than last year here in southwest Ohio, although this week the winter cold has set in, and the evenings have been darker, and by 5pm it starts to get dark. Tonight looks to be the first snowfall and the temperature is down to -2 C.

Lower Austria southern part.
We have a normal November weather. We had a long period of sunshine, now followed up by foggy and cloudy days, temperatures normal as "they should be" at this time. About 5 to 10°C down in the valleys. On the mountains where the sun is shining it will go up to 15°C.

Gets very cold at night sometimes. We had no snow yet. Excess rain arrived on schedule for autumn / winter. Series of warm spells broke up the cold autumn weather from Oct 16 - Nov 18. This weekend, this week and today was still warm at 16:00 - no cold wind either - , so I could winnow the pinto beans outside to put them into the pressure cooker. On Tuesday fasted sprinting exercise also went in the shining sun during the relative warm spell, though the cold winds were numerous times at least twice as strong compared to what the weather forecasts stated.

No extreme weather so far. Some mist yesterday. Everything appears to be going normal, just like last year.

No extremes what so ever. Since the unusual cold days early September and then again during a shorter time, October developed into a rather mild month, especially during the nights and even a few days with a bit unusual mild days. But otherwise nothing exceptional what so ever.

I took in my flowers from the balcony as late as 4th Nov 2021, which is record late. I cheated a few times by taking them inside during three nights, when the night temperatures where close to 1°C. It believe it was a combination of sunlight and not too much rain, which kept the flowers pretty for a long time. But as we walked into November, the lack of sunshine and more rain, made them start to rot - which is a sign for me to take them in for winter.

We have not had snow yet, except very briefly one in the morning of 8th Nov 2021 around 05.30, with single wet snowflakes falling. And that was it.

I felt, that leafs went yellow rather early already in mid September, and fell down a bit earlier than usual, too. By 1 November most trees were already empty.

I have not looked deeper into the sunshine hours (yet), but we feel that during this season, we have had several nice days with blue skies and sunshine. OR simply said, it felt more normal. (And we are still in good spirits

) Last autumn transition into winter was horrible, because in essence there was almost no sunshine during 2 months, just endless gloomy dull gray skies (end of Oct, whole Nov and into Dec 2020) - which killed many of our plants and made winter feel more heavy (moody) than usual.


It was fun to play among the yellow leafs

(well it send Sal to play, as my photomodel *grin*). But since I only used Black & White analog film, the yellow didn't come out of course, so my husband Sal colored the image in post. It came handy, because around the same time I found a quote after a couple months on my computer, which says "I know you laugh at me, because I am different. I laugh at you, because you all are the same".

When we experienced that extreme downpour at the outdoor station Högdalen in Southern Stockholm - located 1 km from where I live, in June 2021 i think it was -- where 83 mm rain came down within 30 min. It all lead to excessive flooding day after (because big pipes apparently broke down day after, flooding the rails and subway electricity grid, and everything lying beneath the ground, as well neighboring food stores... (which were without cooling systems for 3.5 months unable to sell meat, milk, and such).

Well, on 8 Nov 2021, they finally opened the rail again after 5 months (!) The damaged part of the rail (200 meters) got all rebuilt from scratch (and the complicated electricity stuff that was underground, which I don't really know what exactly is/was down there). I felt it was fascinating that it took a whopping 5 months, though !

During the first 3 months the station was in essence closed in a way, where the main subway traffic ended in Högdalen, while an extra "shuttle train" was swooshing between the two remaining / cut off stations. Going to work, or coming from it, took like 35 minutes extra every day, which felt strange, when you live only 1 station away from it. As a subway driver, well you live with many breakdowns *LOL*, and it doesn't feel as strange. As a passenger, i am sure it was annoying for many.
Last edited: Nov 18, 2021

FOTCM Member
Today there is wind and the beginning of snow. Poland, Katowice.

Administrator
Moderator
FOTCM Member
It was -2c this a.m., only made it to 2c mid-afternoon. Heavy fog and overcast all day so far and it is now 4:30 p.m. (16:30). Not usual weather for SW France.
T

You have about the same temperature as people further north. This afternoon presented an unusual situation in so far as Copenhagen (first entry) located at 55 North showed the exact same temperature pattern as Nuuk at 64 North and located in South Western Greenland.

Hungary, 90 miles west of the border of Ukraine

Another series of warm spells. Mild, but enduring rain. Lukewarm winds. Overcast skies, but the sun comes out to shine for an hour or so. Even at night doesn't get cruelly cold.

And so... SNOW has arrived for real. Well, not the first time, but in a way where it really first night this winter season, covers everything. Where I live in the Southern suburbs, as I stepped off the buss, 6-7 cm snow had come down. While when I left the subway train depot in Vällingby an hour earlier (NW of Stockholm), only 1-2 cm were present.

It is the kind of dry, fluffy snow we've got - and really pretty. The world get's suddenly a lot brighter (and more silent). I am not really a big fan of snow, yet I do appreciate the beauty and the effect it has on suburban landscapes. A kind of magic; energy stimulating to the naked eye, a bit mystical and wonderfully tranquil to the soul. When you work nights and go home, you get the to see the innocence of fresh fallen snow - before it is all "beaten up", dark and dirty (on the streets in the city core).

We had rather cold weather during the past week, with pretty cold nights down to -10°C in the suburbs, and -7° where I live - and below 0° during daytime. Coarse frost has been visible in the shadows and roof tops even during the day. Also; I saw the sun shining during the past 5 mornings... which feels almost rare compared to the traditionally long lasting dull, gray weather up here. However, I believe that this time, we had finally a normal sunshine November month (2021).

FOTCM Member
We had quite a storm yesterday here in Victoria, Australia. There was water logged on the motorway which delayed my ride back home by 2.5 hours. I got Hay fever today from the sheer exertion of dealing with traffic and super-charged pollen that happens during thunderstorms. I saw plenty of cloud-to-cloud lightening from the car which would imply pockets of really dense clouds leading to crap loads of moisture being dropped quickly as hail etc. A repeat performance has been forecast for today so, lets see what the weather gods bring.

A rather strange co-incidence that this is happening on a day when the Pandemic bill is being finalised in Victoria which would accord greater powers to the state government as opposed to applying the "State of emergency" which is reserved for all types of emergencies. The bill goes into law today.

Below is the link to the official report and the video follows. 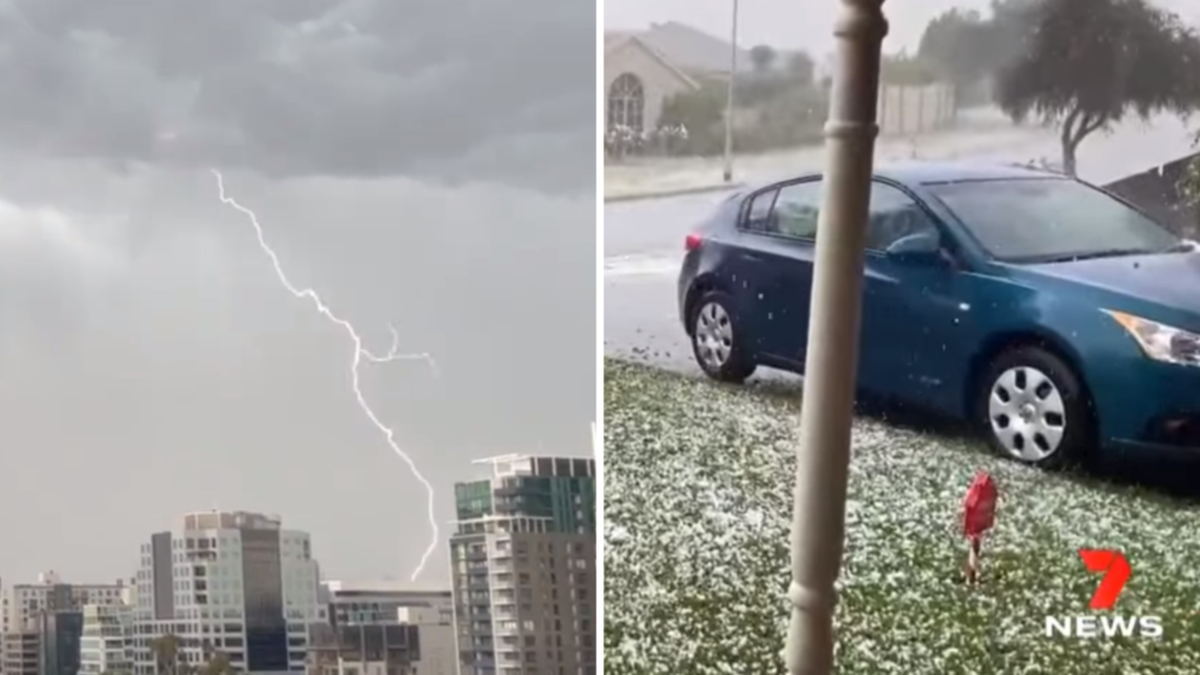 Wind gusts as strong as 106km/h were recorded as the powerful system moved through.