Transgender "out of the blue" - a new kind of Gender Dysphoria 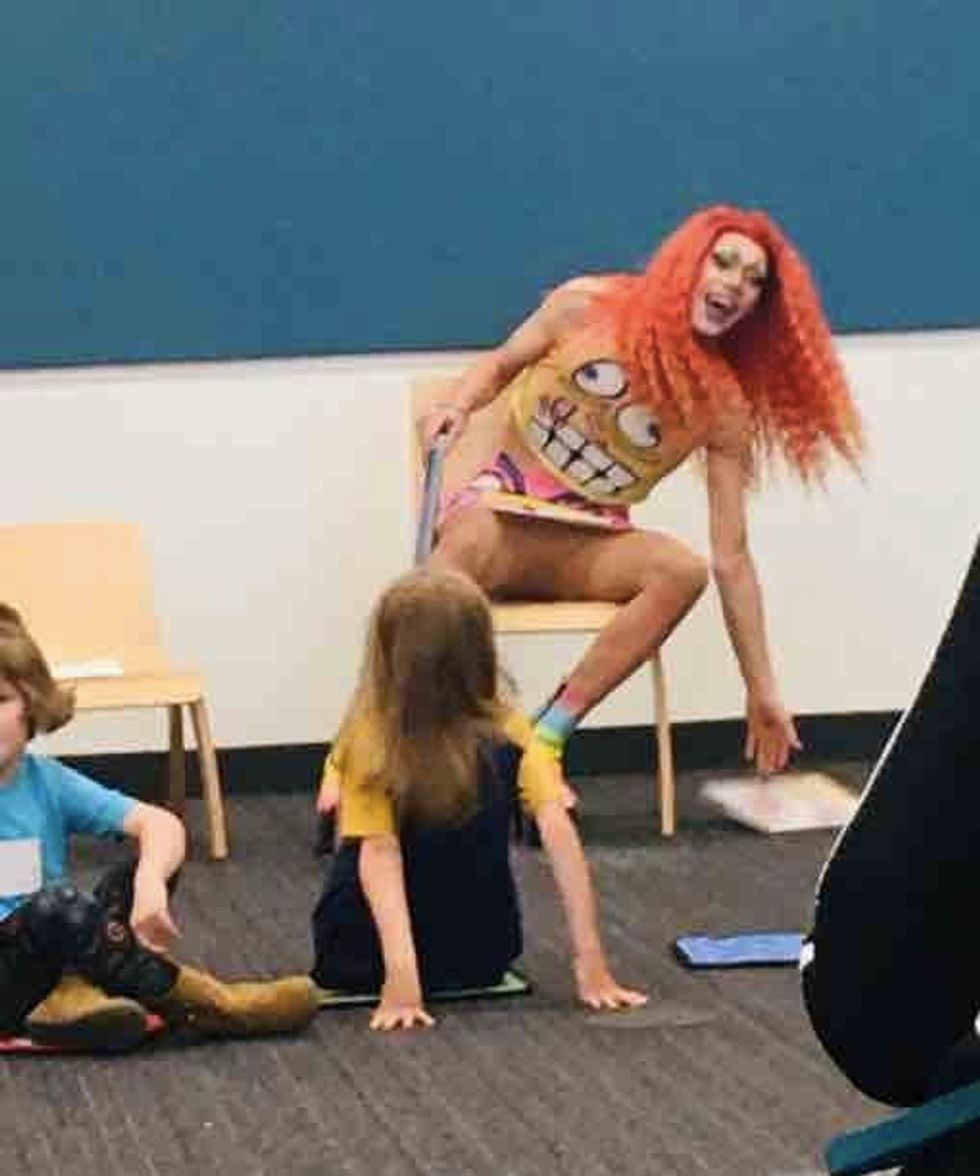 Does anyone believe this was accidental? 'Her' pro pic below (Sasha Sota):

A photograph shows a miniskirt-wearing Drag Queen Story Hour performer with an exposed crotch as children sit close by, according to a writer who attended the event earlier this month at Ridgedale Library in Minnetonka, Minnesota, and took the photo.

Anne Taylor noted in her Caffeinated Thoughts piece that about 22 children — ranging in age from infant to toddler, preschooler, and elementary schooler — were in attendance, along with adults.
Then what?

Taylor said performer Sasha Sota — who wore a pink miniskirt, spiked heels, and a shirt with an exposed midriff — "strode in suggestively past the children, sitting down in a chair before several preschool-aged girls with his legs spread wide, exposing his nylon-covered crotch in front of children sitting at eye level. We noticed that he did this often while reading nervously before the children."

Taylor noted that the librarian hosting the event reminded the adults that they are role models for the children and that “if anyone gets upset — even grownups — you can leave."

She added that afterward Sasha Sota approached her and thanked her for attending:

He quickly sat down next to me on a stool. So I inquired how he got started in drag. He told me he loved theatre, and this is merely a way for him to stay connected. I asked, “All the time?" He responded, “Oh, Yes! I'm in college studying theatre." Taking note of how he nervously kept flipping back his wig, I inquired what he thought of children. He quickly responded, “Oh! I love children!"

I will point out that not all Drag Queens are pedophiles or convicted sex offenders. Being in theatre during my college years, I noticed that dressing in drag was viewed as an easy out where one could justify these individuals are merely "practicing their craft." What you don't see behind the act and the makeup is very dark: self-abuse, drugs, alcohol, and a lot of sex. That IS the nature of the drag community, period.
Click to expand...

What did the library have to say?

TheBlaze on Tuesday reached out to Hennepin County Library for comment on the Oct. 17 event. Here's the library's full statement:

Storytime Together with Drag Performers is a relatively new program in the Hennepin County Library system and elsewhere. Drag performers historically were leaders in the fight for equality — including them in LGBT History Month observances is meant to both honor the history and provide a welcoming space for families who may not otherwise see themselves reflected in our public places.

We are all still learning — and unfortunately making mistakes. Most storytime performances involve a performer in brilliantly colored costume and theatrical makeup. They read books and share songs about characters who are different in some way, and who learn to accept and celebrate differences in themselves and others.

Every performance is different. That allows for a new show every day, but also introduces the possibility of new mistakes.

Partway through this year's schedule, we realized the need for a performer dress code. We followed up right away with each of the performers to ensure that their costumes are appropriate for the audience and activity.

Feedback has been overwhelmingly positive, especially from LGBT families. As we continue to be both innovative and inclusive, we are committed to also be good stewards of our public spaces
Click to expand...

From the Child Protection League Action:
"Gemini Valentine" adult drag performer read to preschoolers at the Hopkins Hennepin County public library on Oct 5.
Please note: These photos have not been edited, blurred or altered in any way. 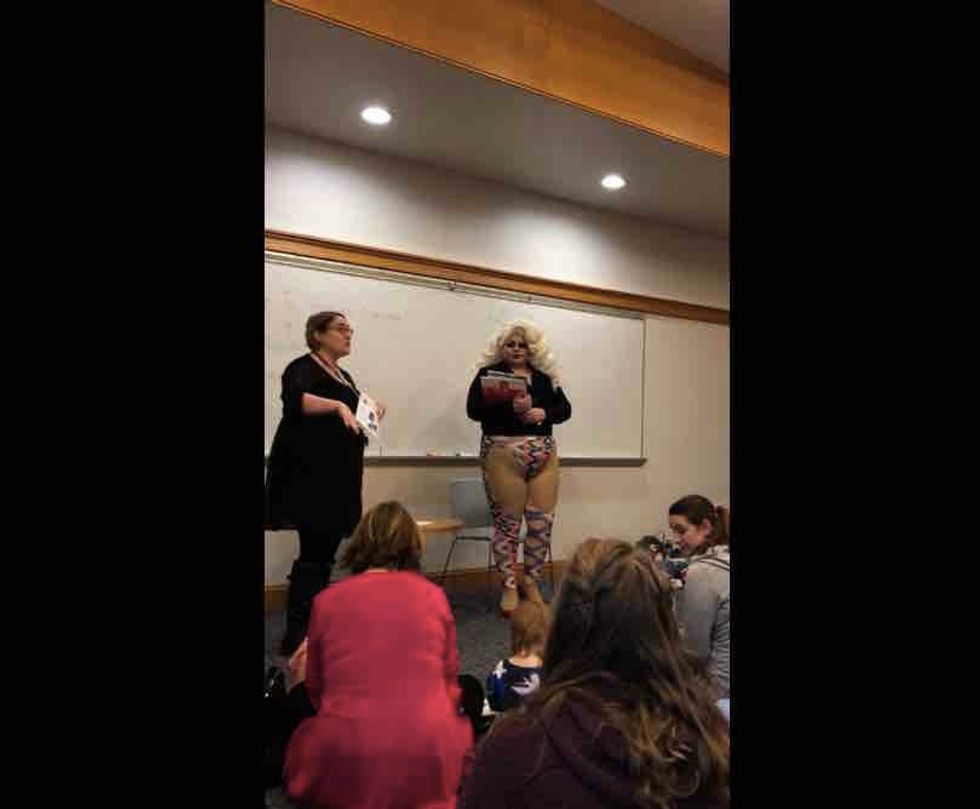 [About that Dress Code . . . maybe they should be required to wear one - a long one! With girdle/corset and long pantaloons underneath! What an outstanding role model for small children - yea parents!!!]

Child Protection League Action posted several images of the event on its Facebook page, and many commenters weren't pleased.
"This is what our tax dollars are going for," one commenter said. "I see nothing wrong with drag in the appropriate venue for adults, but is this necessary? Come on people it is getting ridiculous!"

I'm trying to figure out exactly what level of hell our reality has shifted to.

A new sex-education curriculum will teach children in Austin, Texas about sexual orientation, as well as how to use prophylactics. Parents say the initiative encourages kids to engage in unhealthy and dangerous sexual activity.

Austin Independent School District’s board unanimously approved the new course material on Tuesday. The curriculum, which spans grades three through eight, will touch upon gender identity – a first for the district. Seventh graders (12-year-olds) will also learn about how to correctly use a condom. Proponents of the new guidelines said that it’s important to foster “healthy communication” about sex and relationships, as well as to reaffirm the district’s support for the LGBTQ community.

Plenty of parents were less than thrilled about the new changes, however.

Others expressed fears that focusing on gender identity at such a young age would be detrimental to children who barely understand their own biology.

Demonstrations both for and against the curriculum were held outside the board meeting. A group of parents opposed to the course material were countered by a trans woman who shouted “trans lives matter” as she was hauled off by police.

The district says that parents will have the chance to opt out of the sex-ed curriculum lessons for their children. The new curriculum could be in place as early as May 2020.

Why it's Wrong to Chemically Castrate Children

Back on earth , some common sense happening !

Hopefully it will become a new law and set a precedent.

kids are not able to make these life altering decisions at certain ages in fact in case you didn't know guys, there's a huge movement of detransitioning kids right now kids who were transitioning in their early teens and who are now in their mid 20s and they're realizing they've made a huge mistake.
Click to expand...

FOTCM Member
Does anyone know of any transcripts from the C's regarding this phenomenon? Not just universities, antifa, SJW, etc., but the rapid-onset dysphoria specifically?

iamthatis said:
Does anyone know of any transcripts from the C's regarding this phenomenon? Not just universities, antifa, SJW, etc., but the rapid-onset dysphoria specifically?
Click to expand...

I'm not sure if this is the only time it was brought up in a session, but I found this:

A: It is more likely to cause tragedy and moralistic snapback.
Click to expand...

Nothing on dysphoria specifically that I've found or remember though.

FOTCM Member
Another round of nonsense, a lot of pressure from Canada to go on with the transitioning agenda. On a better note I find the ladies in the videos very well articulated and also think they have their mind set in the right direction.

A BC father is facing potential jail time for speaking out about the government’s involvement in his daughter’s attempted transition from female to male. He was ordered to appear in court on March 9th 2020 after breaching his gag order by doing an interview with journalist Laura-Lynn Tyler Thompson who is also facing criminal contempt charges at the hands of the attorney general David Eby. If the courts and the AG get their way the pair could find themselves in jail for up to 30 to 45 days, depending on the plea. In this video Dan Dicks of Press For Truth speaks with Laura-Lynn Tyler Thompson, Angelina Ireland and Jenn Smith about their involvement with this case, how we’ve gotten to this point and where they see it all going from here!
Click to expand...

Threats to the doctors it's not helpful but it does show the outrage that people feel, that they feel something grossly
inappropriate is going on in Canada and we cannot be silent.

They don't want it getting out because this is a global agenda first of all you got to follow the money.

Jen Smith today in his presentation was showing the links, the inappropriate ties between doctors,the pharmacy, the lawyers, the judges all of them LGBTQ activists and the LGBTQ community is actually very divided on this I have got some wonderful letters lately from lgbtq saying thanks for standing up for kids because we don't think they should be transitioned.

I am half way through, and she says really stunning and concerning things. Well, most of the things we already know about, but she backs it up with statistics. And it is jaw dropping.

It's crazy what is going on right now, with testosterone being prescribed without testing and parents approval. Suicide cases rising. And if before gender dysphoria affected 0.01% of the whole population, now 2% of the total amount of high school students identify as transgender. And most of them are girls.