What is the second death?

Wow Wandering Star, that's quite a coincidence -- if it's only that...

The control system seems to double its efforts whenever someone attempts to awaken --even if just a little-- by inserting all sorts of synchronicities and 'agents' to lull them back to sleep. Laura gave several examples of this phenomenon in the Wave series and the C's have warned repeatedly for the manifestations of such if I recall correctly.

Conversely, the Universe and/or Divine Cosmic Mind seem to arrange 'confirmations' AFTER someone has made an important choice or decision on some subject.

The problem is to discern which is which...

Thanks for worrying Palinuro.

If someone is causing "synchronicities" to take me back to the fold ... well, they're doing their job, right?

For my part, I seek the truth and nothing else. Then you have to keep buying at the supermarket, helping the children with their homework, dealing with the peculiarities of the job, etc ...

The high strangeness is the backpack of the seeker of truth and ... for my part, if an alien parks an ufo next to my house, it does not serve much ... Well, unless the alien invites a beer .

I think, a useful concept needed to understand the issue of Second Death, its to look at the bodies as vehicles of soul-counsciousness, so we have a physical, a psych, a mental and a Energetic Body (the whole chakras), where the Energetic (chakras) bonds the more subtil bodies (like psych, mental) to the more dense (like physicall) body.

The Tibetan Book of Death may help to clarify these "processes" without mention the chakras:

The Three-fold Process of Dying

Phase 2 - The dissolution of the elements and the psyche. The element earth sinks into water, and the water of the body can no longer be sustained. Water sinks into fire which dries out speech; fire sinks into air and it dissipates the heat of the body. Then the element of wind sinks into ether which holds the mind substance. Lastly, the outer breath and inner breath consume one another. When the last elements and their interconnected properties are dissolved, pure awareness remains and is freed from all attachments to the material world, then the primordial clear light is experienced boundlessly in a non-dimensional space.

Phase 3 - The illumination of consciousness after death. This describes how the signals which pass through our senses while still alive gradually turn into a self-representation of awareness at the moment of death. The "inner space" turns into an infinite dimension as the perception of external physical reality ends.

(1) Everything you perceive from the outside slowly appears as coming from the inside.
(2) What you see outside then emerge just like the light of the moon. As time passes, what you see inside appear like sparks of fire.
(3) What you see outside appear as the light of the sun which slowly becomes dark. Then what you see inside appear as candlelight.
(4) What you see outside appears faint and remote then your consciousness slowly enters the primordial clear light. This is like seeing the light of dawn.
(5) Lastly, consciousness itself appears like the clear sky. With the absence of thought, the primordial clear light now appears, infinite and without a central perspective. If your consciousness is free of karma, you immediately achieve enlightenment, obtain the dharmakaya (truth body), and can stay here within the realm beyond all becoming, the deathless realm. If not, then you will go down to experience the other intermediate states in the Bardo.
Click to expand...

A more currently and detailed tech (para-psych) approach may clarify about the chakras and the Second Death:

Death is the painless deactivation and discarding of a vehicle of manifestation of the intraphysical or incarnate consciousness. This transmutation represents a change in the level of the consciential principle of life through the deactivation and discarding of one of its vehicles of manifestation, similar to various known natural events, such as the following evolutionary transmutations:

Each death constitutes the paralysis and consequent definitive disintegration of a certain instrument, machine, vehicle or body through which the consciousness acted. Each death can be represent by reactions of Shock, Crisis, Transition and a radical Change for the ego that is generally painless and for the better.

The deaths, however, within human customs, still remain intensively involved in excessive taboos, conditioning, preconceptions, beliefs, superstitions, emotionalism, misunderstanding, low-level information, bad information and disinformation. Despite all this, the 3 types of Death are experiences more agreeable than disagreeable. Each death, or discarding of a consciential vehicle, actually constitutes a type of Birth of the consciousness in another far more evolved form of existence.

The transition of first death is the deactivation or permanent cessation of the vital functions of the human body (cardiopulmonary death and encephalic death) do not offer the Vehicles of Manifestation of the Consciousness intraphysical consciousness any means of escape. It also definitively eliminates from the freed consciousness. Myths, taboos and mysticisms of all types confuse the human mind when engaged in comprehension of extraphysical realities. So, Lucid projections, or physical and temporary minideath, permits this vital conquest while still in human life.

From the perspective of the vehicle of manifestation, the impure extraphysical consciousness is that which only passed through deactivation of the human body (first death), without freeing itself from the remnants of the holochakra (second death). According to what can be observed in the phenomena of projections, the death of the physical body does not constitute a cessation of energy, but represents more of a liberation of energy for the consciousness.

The First Death with regard to the human body, occurs because, with the rupture of the silver cord, consciential energy (vital fluid) can no longer be transferred from the consciousness (mental-body) through the psycho-body and the holochakra to the human body. From this point on, the soma begins to gradually disaggregate, installing organic chaos and the annihilation of the cells. The death of the human body and its utilization as a cadaver, or used matter, obeys the law of conservation of energy which states that Energy is neither Created nor Destroyed, but Transformed.

The Second Death is defined by deactivation and discarding of the holochakra, including retraction of the remnants of the silver cord and the aura of the holochakra, the extraphysical consciousness thereby remaining in the mental-body as well as in the psycho-body, which presents its own aura.

In deactivation of the holochakra, the remnants of the silver cord vary according to whether the intraphysical consciousness, which has returned to the condition of an extraphysical consciousness, has or has not completed the existential period preestablished by its evolutionary orientation. In this case, the remnants of its vital energy will have been partially or totally used up.

The Third Death is deactivation and discarding of the psycho-body with the rupture of the golden cord and the entrance of the extraphysical consciousness into the condition of Free Consciousness, from which point it permanently manifests only through the mental-body.

The birth of Free Consciousness happens only once. After all intraphysical lifes (or journey lessons), occurs the consciential liberation with deactivation and discarding of the psycho-body, the end of erraticism and the end of successive intraphysical lives.

The Third Death signals the end of the migration of the ego, the extinction of the cycle of the coming and going of reincarnation and deaths, or personal intraphysical existences. This is the inevitable objective of all consciousnesses or sentient beings. Is the crowning of the evolution of the consciousness at the end of the seventh stage of the scale of continuous self-awareness. It thus initiates a new stage in eternal evolution, and one which is currently entirely unknown by humankind.

It is easier to understand the condition of erraticism of the extraphysical consciousness and much more difficult to understand the end of this same erraticism, or the condition of the domicile of the extraphysical consciousness in the mental-body in the mental density. It seems that no one is yet able to satisfactorily answer this question.

People naturally always concern themselves with the challenging idea of the existence of the primary cause of the cosmos (Source), or the uncaused cause. Perhaps still more disturbing is the idea of the mental density where the extraphysical consciousness manifests itself forever, without appendices, as we know it, living in its whole only with the mental-body, probably in a condition of continuous self-awareness.

more about The Three Deaths

As can be deduced from the assertions made here, the 3 deaths merely represent severances, ruptures, phasic mutations or separations of vehicles of manifestation that can be deactivated, discarded and decomposed, in light of the immortality of the consciousness.

None of the 3 deaths whether analyzed separately or together, in any way imply a complete extinction or annihilation of the self, the consciousness or conscientiality. Biological death, due to natural causes, always represents an occurrence that should be considered an authentic evolutionary process of the eternal consciousness and the development of the very vehicles of human manifestation of consciousnesses.

The first and second death of others are occurrences for which lucid intraphysical projectors are called upon to help extraphysically during assistential projections. This turns the projected intraphysical consciousness into an authentic assistant of biological death. Of the 3 deaths or the 3 vehicular disposals of the consciousness, the discarding of the human body or the biological death is the most disconcerting and radical, or the one that presents the greatest environmental discrepancy for the ego.

As strange as it may seem, discarding is the occurrence that actually most closely approximates the phenomenon of human lucid projection in its manifestations and effects. This is why it has continued to be so difficult throughout the millennia for the intraphysical consciousness to implement the natural habit of projecting the human body with lucidity to other densities beyond the tropospheric life in which we live in intraphysical existence.

The discrepancy or disparity between the consciential environments or vehicular conditions is 1:1,000 when the intraphysical consciousness projects in the psycho-body (bearing in mind the weight of this vehicle) and 1:“infinity” when the intraphysical consciousness projects only in the isolated mental-body. The lucid projector would do well to meditate deeply upon this topic.
Click to expand... 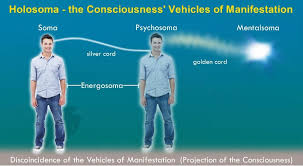 Border Dog said:
I think, a useful concept needed to understand the issue of Second Death, its to look at the bodies as vehicles of soul-counsciousness, so we have a physical, a psych, a mental and a Energetic Body (the whole chakras), where the Energetic (chakras) bonds the more subtil bodies (like psych, mental) to the more dense (like physicall) body.

The Tibetan Book of Death may help to clarify these "processes" without mention the chakras:


A more currently and detailed tech (para-psych) approach may clarify about the chakras and the Second Death:

Very well explained. It is surely a good approximation to the "truth".

The "difficulty" with the matter is the lot of people who don't want to "die." No way. They want to continue with their "suit" forever.

As long as there is adequate energy, they will resist the "second death."

We go through stages from conception to death. My thinking is that second death means maturity. But our lives along its progression is dotted with various stages, and we adjust accordingly. But the first stage is the most impactful, and it makes possible subsequent breakthroughs that seem more ordinary, but it was because of the breakthrough into maturity that gives us the ability to breakthrough subsequent stages and not be so abrupt. So, there are many deaths - meaning stages of life, but the death upon maturity is most impactful, making the other stages seem repetitive, because we are doing the same thing, owing to our initial success that imprints in us its experience.
You must log in or register to reply here.
Share:
Facebook Twitter Reddit Pinterest Tumblr WhatsApp Email Link
Top Bottom